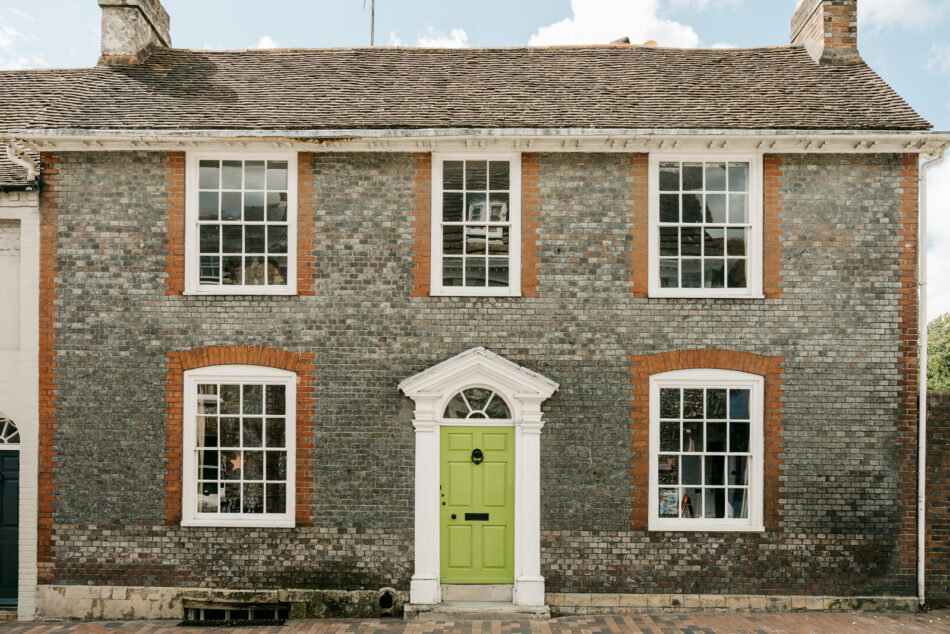 The sitting room has particularly excellent plasterwork in a Grecian design

This wonderful, early 19th-century Grade II-listed house lies in the heart of the historic market town of Lewes, East Sussex. Double-fronted and regency in design, it is set over two storeys with four bedrooms and a spacious cellar; internal accommodation extends to almost 2,000 sq ft. Countless original features have been carefully retained, including excellent chimneypieces with working fires, original pitch pine floorboards, wonderful plasterwork and joinery. Additionally, there is a charming south-facing walled town garden, designed in an informal country manner that responds to the local vernacular. Although an already-characterful home, it may benefit from some updating and represents an excellent opportunity to reimagine and further improve the beautiful spaces within.

Set within the Lewes Conservation Area, the house is positioned at the end of its terrace at the adjunct of Antioch Street, the shortest street in the town. Three bays wide, with eight/eight box sash windows, it is built with a grey brick façade with red dressings, typical for buildings of the period in East Sussex. A deep modillioned cornice surrounds the clay-tiled roof.

The rear south-facing garden is entirely enclosed with a tall red brick wall laid in Flemish bond with two separate side entry gates. Although a neo-classical house at the main street-facing elevation and in the principal rooms, the house has a charming vernacular character to the rear, including the double-hipped clay tile roof, kitchen rooms and wonderful cottage garden. For more information, please see the History section.

The entrance porch to the house is set upon a raised stone step from the street and features Doric pilasters supporting an open triangular pediment with a roundhead radiating fanlight. The original six-panel front door, painted a brilliant lime green, opens to the private hallway with limewashed walls and exceptional plaster cornicing; the hallway bisects the plan and has extended views to the garden beyond.

At the front of the plan lie two reception rooms, currently used as a sitting room and a study. The two rooms mirror one another; both have exposed pitch pine floorboards and beautiful Carrara marble chimneypieces, with cast-iron grates and working fires. The sitting room has particularly excellent plasterwork in a Grecian design. A Victorian ceiling rose is a later addition.

A further reception room is at the rear of the ground floor plan, overlooking the garden. Currently used as an additional study, it would make an excellent dining room. This room has a beautiful bullseye chimneypiece made from local Sussex black marble, with a cast-iron grate and working fire. Original joinery is especially highlighted in this room, with two fine Georgian cupboards built into the alcoves.

Something of a palimpsest of spaces, the kitchen is a wonderfully characterful room. Featuring quarry tiles underfoot, it opens to the scullery, a later addition, with a brick-laid floor. A ‘Sussex slider’ sash window looks out to the garden next to the dining area, and there is a separate side door to the garden from the scullery. The room has excellent ceiling heights, and original beams have been left exposed, lending a charming vernacular character to the space. A wall of original cupboards offers plentiful storage in the form of a capacious dresser, and there is space for a range cooker in the hearth.

The cellars are accessed from the hallway by descending a wooden staircase, with two main rooms on either side and brick flooring throughout the spaces. There is a generous larder here, and the original coal store is still in place. This floor has very good ceiling heights.

The main staircase, featuring a beautiful rosewood handrail, ascends to the first floor and the bedchambers. The stairs lead to an open landing, with an excellent quality of light care of a large box sash window positioned at the very end. The proportions throughout the house are remarkably elegant and never more apparent than here. Two large bedrooms lie at the front of the plan, each with original cupboards and working fires. To the rear, through a beautiful neo-classical roundhead architrave, are two further bedrooms and a bathroom; all three rear rooms have incredible southward views of the Firle Beacons in the distance.

The walled garden is incredibly private for such a central location in Lewes and features wonderfully mature planting. A brick-laid path extends from the rear porch and forms a terrace, with vines that bear grapes carefully winding their way around the rear façade; a garden gate set into the wall opens to Rotten Row. Stunning roses grow along the west wall, with additional peach and pear trees and further roses and camellias that come into bloom in the summer. A small ornamental pond is positioned to the southwest of the garden, beside a mature apple tree. Bluebells appear in May, and there is a small herb garden with parsley and sage. A pathway leads to the side of the house with a shed and side entry to Antioch Street.

There is much to do in Lewes itself, which is home to plenty of independent shops, antiquarian bookshops and a number of antique markets. There are numerous cafes, such as Patisserie Lewes and Flint Owl Bakery, and galleries, including The Star Brewery Gallery and The Needlemakers Craft Centre. There are also many independent businesses that stock work by local craftspeople. Glyndebourne Opera House is only a few miles away, and special coaches are laid on at Lewes Station during the season. There is a new cinema and art complex, The Depot, which shows a variety of mainstream and arthouse movies.

Lewes is nestled in The South Downs National Park, with many beautiful walks across the surrounding landscape. The South Downs Way, which takes a spectacular coastal route over the Seven Sisters to Beachy Head, leads all the way to the sea.

The town is also known for its Bonfire Night, which it hosts annually on November 5th. It is a spectacle like no other, with a large, costumed parade comprising various bonfire societies that wind their way through the town to their separate bonfires. The Battle of Lewes is a popular community event that takes place over two days every May and runs through the streets of the town at various points on the High Street, from Lewes Castle ending at Lewes Priory.

Brighton is also close by – only 10 minutes by train – with its countless restaurants, shops and cafes.

Lewes has a history dating to pre-Saxon times as a significant strategic point thanks to its position on the slopes of the Ouse Valley. A Roman settlement is believed to have been positioned on the site, followed by Anglo-Saxon and Anglo-Norman settlements, until around the 6th century when the town was founded.

Boxall House is believed to have originally been built in 1810 by a Mr Boxall for a local merchant. Built on what was then known as ‘copyhold land’, just outside the town walls, the house sits upon dressed stone foundations, with stones taken from the ruins of Lewes Monastery after King Henry VIII’s 1530s dissolution of the monasteries. Parts of the cellars are believed to date back to 1610.