A Private View: artist Julian Bell and his wife, Jenny, on their quiet admiration for the past in a Georgian house in Lewes

As they prepare to move after 28 years, Julian – grandson of Bloomsbury’s Vanessa – and Jenny talk to Inigo about the delights of methodical architecture, the romance of ceiling roses and why, sometimes, it’s best to leave things as they are 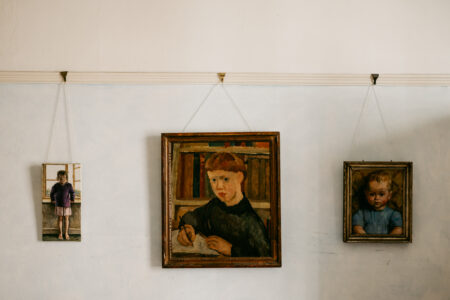 Julian and Jenny Bell are making coffee on the Aga in the sun-filled kitchen of their Georgian house in Lewes. “Every now and then we’ve thought about making some dramatic change,” says Julian, “but it’s just so lovely as it is. We’ve never been able to!” Neither Boxall House’s structure nor its decoration has seen many alterations since the 1940s; from the Sussex marble fireplace in Jenny’s downstairs study to the fitted cupboards that line the kitchen walls, much remains the same. A row of sprung coils, once used to hold bells for summoning servants, remain in the back hall, while a pile of coal at the bottom of the cellar is another little nod to a bygone era.

Julian has a family connection to the South Downs. His father was Quentin Bell, son of artist Vanessa, whose much cherished farmhouse, Charleston, is less than seven miles away. “I haven’t gone to town Charleston-ising the place,” Julian says, “because it’s just not that sort of house.” But even still, it has the same charm as his bohemian grandmother’s rural retreat. It is full of books, drawings and paintings, some by Julian, a painter in his own right as well as a writer. A portrait of Quentin by Vanessa hangs in the sitting room, while Bloomsbury Group pottery lines the mantlepiece in Julian’s study.

Julian and Jenny may not have made many structural changes to the house, but that’s not to say that their mark isn’t felt – not least in the beautiful collection of objects they have amassed over the years. This house has a feeling of being loved and respected. Now, as it comes on the market, Julian and Jenny meet with us to talk about creating a home so carefully imbued with a sense of the past.

Jenny: “The house caught my eye first, but then Julian saw it. He simply refused to do anything but move here.”

Julian: “Yes, I said: ‘Right, that’s it!’ It was July 1994 and we’ve been here ever since. The people before us had lived in the house since the 1940s. They hadn’t made many changes and neither have we.

“It was fitted out in a very old-fashioned way – and so it has remained. All the door handles are original, the fingerplates on the doors, all the ancient locks and keys…

“I use the front room as a study when I’m writing. I like the feeling of working at my desk facing the high street, with the whole town passing by, while behind me lies an armoury of books and artworks, including the odd painting of my own.”

Jenny: “And I prefer the quiet rooms at the back of the house. The front is right on the street, but when you’re in the back you could almost be in the countryside, which I love.

“It’s such a calm house, with a great sense of quietness, even though it’s in the middle of the town. My study looks out at the garden through a big window. It’s very peaceful and quiet and is a lovely place to sit.”

Julian: “The bedrooms at the back have a stunning view over the valley and the rooftops of the town, out towards the South Downs. They get the sun all day.”

Jenny: “The moon sometimes goes round there too, which is lovely.”

Julian: “The mouldings here are rather wonderful. In the sitting room, there are linear neoclassical ones, but there is a crazy and incredibly intricate ceiling rose right in the middle.”

Jenny: “The house opposite us has a similar ceiling rose, so they may well have been rather fashionable at some point. Our bannisters match those in other old houses across town too.”

Julian: “There was definitely a cohesive town style in 19th-century Lewes.”

Jenny: “The mouldings in the upstairs hallway are even more impressive; they have rows of little lion heads.”

Julian: “I love how the rooms at the front of the house are very beautifully ordered and methodically proportioned. I find the way the front hall has been organised incredibly satisfying – the arithmetic that must have gone into designing and building it is astonishing. It’s a very elegant piece of architecture.

“Meanwhile, the back is fairly eccentric, with a kitchen that sort of doubles back on itself, and a little annexe off the upstairs bedroom. In contrast, its construction is charmingly higgledy-piggledy.”

Jenny: “It’s strange to think about leaving the house. It’s been such a gathering place for our children and grandchildren. Many of our grandson’s friends used meet here and consider it their base in Lewes. Somehow, because of the way it is quietly split into front and back, they were able to be slightly separate from us.

“It’s absolutely brilliant on Bonfire Night, when the extraordinary Lewes procession goes right past the front of the house. Every window is completely full – it’s great for people watching.

“It’s a very friendly house. No one ever feels afraid here. It just holds you and keeps you in a really lovely way. I really hope that it retains its sense of quiet and calm with the next owners”