A Meeting of Minds: craftsmen James Rigler and Mac Collins bring new meaning to the idea of ‘character building’

The New Craftsmen’s latest exhibition, ‘A Portrait of Place’, sees artisans responding to the treasures, stories and landscape of Norfolk’s Holkham Hall. But how does one go about such a monumental task? It’s about digging deep and looking at the details, say two of the makers 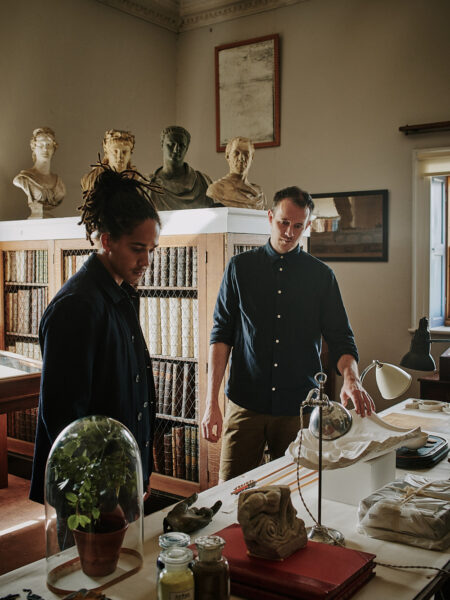 The notion of place isn’t easy to define. And when the place in question is as sprawling, as epic, as wildly grandiose as Holkham Hall, an 18th-century paradigm of Palladianism by William Kent on the north Norfolk coast, where do you even begin? Such challenges are best left to the professionals, of which The New Craftsmen and the makers it represents are consummate. As their latest project would suggest, they’re not so easily daunted.

In the spring of 2021, the London gallery asked five of its roster – among them ceramicist James Rigler and furniture-maker Mac Collins – to create A Portrait of Place. This is the second iteration of the exhibition. This time round, it invited the makers to respond to every inch of the stately home, from its generous demesnes to its exquisite furniture, taking in marble-clad extravagances and below-stairs billets, as well as the people that designed them, made them and lived in them. The resulting collection, recently exhibited at Holkham and now on show at the gallery’s Mayfair digs, has been issued as editions for sale.

Rather than be cowed by the embarras des richesses on show at Holkham, built for Thomas Coke, the first Earl of Leicester, both James and Mac delved into the quieter corners of the house and its behind-the-scenes stories. For all the differences in their methodologies and materials, there are potent similarities between James’s ‘Wild Beast’ table and ‘Comet’ light, and Mac’s ‘Jupiter’s’ chair and side table. Both are strikingly contemporary in expression; both have one foot planted firmly in the Classical tradition. Above all, however, they both explore and seem to quietly comment on a legacy of making in a house that has forever been a showcase for paragons of human creativity.

Now the pieces have made the journey from Norfolk to London, Inigo listens in on a conversation between the two craftsmen as they discuss the perplexities and pleasures of distilling the personality of a place – and how craft, above all other modes of expression and creation, may be best placed to help with the process.

James: “Residencies are always interesting, but that was particularly true of this one. Holkham is overwhelmingly rich in detail and furniture and history and stories, but then it also has this rigorous, quite austere architecture. It was, to begin with, quite difficult to find a way into that building.

“I think both of us were almost searching for the imperfections, for the points at which the reality didn’t quite match up with the intention – we had lots of trips up into the attics, for instance, and down into the basement. I think it’s easier to imagine contributing to them over those bigger, more formal rooms. And yet weirdly, I think we’ve both ended up with objects that are intended to take their place in the grander spaces. Do you think that’s true, Mac?”

Mac: “Yes, definitely. In these huge spaces, everything is perfectly preserved. And while I really appreciate the craftsmanship, I’m actually more inclined to look at the hidden things, the stories that don’t necessarily follow the linear narrative. James, you made a good point recently; you said that Holkham doesn’t seem to have followed a straight line, it’s too fantastical: I mean, it’s a Roman palace in Norfolk! So to take inspiration from the things that were right in front of us didn’t seem like the right thing to do.

“At first, I was really drawn to the Marble Hall. It’s so surprising – you enter this huge space through the plainer Palladian entrance and suddenly it’s like being in the Pantheon. But what is truly amazing is the fact that, behind all of the stone façades, there’s just this wooden structure nailed together. It has carpenter’s marks in it. It’s all a bit dusty and a bit dirty. It’s that sort of stuff that really sucks me in.”

James: “It’s almost like a theatre set. I suppose that’s what I mean about that mismatch between intention and reality – this is meant to be rational architecture! But actually it’s just slotted inside a more rudimentary, almost more ancient-feeling structure. It’s not straightforward – and I think that’s true of the furnishings too. Some of the sculptures are thousands of years older than the house, which was built to fit them. It’s so fanciful and made-up and that’s definitely something I drew on… I love the richness of the details too, like the grotesque lion paws of William Kent’s furniture – with the Roman sculptures brandishing their bows and arrows, it reminded me of some sort of wild hunting party. I think my hairy table definitely fits into that narrative.”

Mac: “I went down a different path, towards a pantheon of the gods, and ended up focusing on Jupiter. At the moment I’m really interested in working out who I’m designing something for, what their presence is, even what position they’ll be sitting in it, if it’s a chair for instance. It’s interesting how that might change the way a thing looks. There’s a 2,000-year-old statue of Jupiter here that was bought long before the house was built; you can see from early plans that he was intended for the middle of Marble Hall. I latched onto him (and the fact that he ended up moving location) and made him my focal figure. What would it be like if he were sitting in a wooden piece of furniture, right at the centre and the core of this whole estate?

“The other elements of my pieces came from the smaller, perhaps less noticeable details: the wine colour I went with is taken from the darker corners of the main saloons; the oval shape of the frame comes from the family crest, which shows an ostrich holding a horseshoe in its mouth. It’s quite funny.”

James: “The wonderful thing about a residency like this is that you can start with similar material and end up with such different results. That’s what makes it so enjoyable – the sources push you in new directions, but you combine them with your own interests to make these tasty cocktails. It’s a really exciting thing.”

Mac: “And what’s brilliant about the objects themselves is that they’re designed to have longevity. They can exist in the context in which they were made, but they’ve also got somewhere to go. At the moment, everything in my work is rooted in function, but I’m also interested in the way you can marry narrative and inspiration into an object with a defined use and still make something expressive. With this project, I loved the idea that we were creating something for the house, but that it could exist separately to it. In fact, it’s more likely to.”

James: “Exactly. And what makes that possible is that these pieces are site-responsive, rather than site-specific. It sounds like a small difference but it’s quite important. I love the special superpower that craft has, in its being functional as well as intimate. Pieces like ours were always meant to go out and travel the world, to adapt and to be at home in different places. It’s a really powerful thing.

Mac, you and I discussed this quite a lot when we were at Holkham: the estate has such a complex history and has grown out of unimaginable wealth; how can we engage with those spaces in a way that feels meaningful? For me, it’s about appreciating the craftsmanship. So many people that have worked at Holkham over the centuries have been lost to history; I feel fortunate that I can use similar skills to them, but I get to put my name to my work. I’m interacting with the space in a way that wasn’t possible for those people. It’s a privilege.”

Mac: “Totally. So often with beautiful objects, the history of how they were created and the person that made them is lost. But actually, they’re the people that I find myself more drawn to, the people behind the objects, the stories behind the scenes, the hidden little things. Hopefully, that’s what we’ve done here.”