A Talking Point: the playful extremes of And Objects' new furniture collection 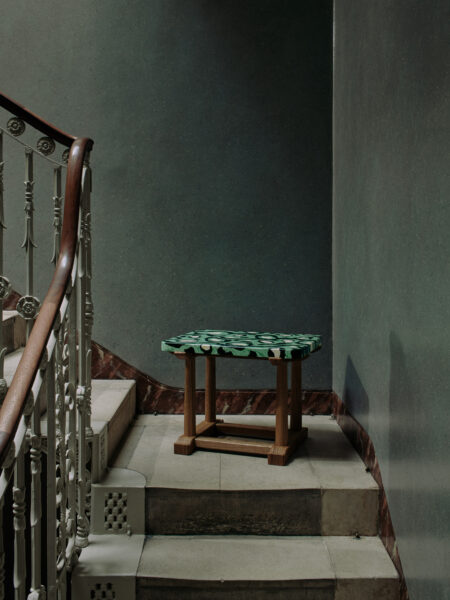 Since founding his eponymous studio in 2000, the Swedish-born, London-based interior designer Martin Brudnizki has become renowned for his sumptuous, lavishly textured schemes; from the clean historicism of the University Arms in Cambridge to the wild decadence of his revamp of Annabel’s nightclub in 2018. His work has a distinct contemporary freshness to it, but takes whimsical inspiration from a wide range of historical periods, sampling styles from French Romantic to Prohibition New York with a verve and wit that is instantly recognisable. It’s an approach that, he says, reflects the spirit of our current era in design, in which individuality is far more important than the rather outdated notion of “trend”. “I think what people will say about today is that it’s very subjective,” he explains. “It’s not one trend, it’s how you want, as a person, to live and what you want to be part of.”

Six years ago, Brudnizki branched out from the interiors world and teamed up with long-term colleague Nicholas Jeanes to form And Objects – a design studio dedicated to making products that are equal parts functional and aesthetically pleasing. The studio’s most recent collection, which comprises everything from tables and armchairs to mirrors and lamps, is actually described by Brudnizki as an “anti-collection”, because its 14 pieces are all very distinct. Inspiration began with Swedish Grace, a forgotten art-deco-style movement of the 1920s, before moving on to the grand architecture of Stockholm at the turn of the century, and the colourful domestic interiors of traditional Swedish homes. Throughout, Brudnizki and Jeanes have assembled references with wit and daring, playing with size and proportion to create startling new forms.

“There is nothing worse than trying to slavishly recreate the past – because all you get is a pastiche and why would we want that?” says Brudnizki.

Instead, says Jeanes, they have created newness through extremity. “We really accentuated what we were inspired by,” he explains.

“We could have just put small details in, but we’ve gone in as heavy as we can. Bang, this is what we are inspired by. This is the object, big statement.”

Such thinking is clear to see in the gleefully quirky pieces of the collection. The “Marden” coffee table is formed from a glass disc placed on top of an abstracted arch in plaster – a nod to Stockholm’s turn of the century neoclassicism.

The “Ropley” table – a attention-grabbing and decidedly psychedelic piece – riffs on the colour and ornamentation of Swedish Kachelofen (ceramic hearths), blowing up decorative details to a sculptural scale.

Throughout, the duo has innovated not just in terms of aesthetic but in terms of manufacturing, working with a range of expert artisans to push traditional techniques to their limits. Collaborators include metalworkers Frances Russel Design in Dorset, and Darwin Terracotta in Blackburn – it’s the latter that took on the daunting challenge of making the “Ropley” – which is entirely ceramic. “They were scratching their heads and saying ‘we’ve never done this before’” says Jeanes. “[But] what we do is about the craft. It’s not only about us designing but it’s about the makers making it. Without them we are nothing. We just have lots of ideas.”

Another technique that the pair playfully reimagined was scagliola – a type of trompe l’oeil plastering which was invented in the 17th century – which is recreated in the “Bighton” side table and “Waltham” console. It was a particularly colourful application of this technique that captured Brudnizki’s imagination during a visit to Goodwood House in West Sussex. But it was another English country house, Sir John Soane’s Regency-style Pitzhanger Manor, that Brudnizki picked to showcase the collection, shooting the pieces in situ for the images you see here.

“I’m a great fan of Sir John Soane, always have been since when I came here to study a very long time ago,” says Brudnizki. “The John Soane’s Museum, of which I’m a patron, is a very special place.”

It might seem a bit of an imaginative leap to go from Swedish Grace and 17th century marbling to the grand spaciousness of the neoclassical era, but, the duo see distinct similarities between their approach and Soane’s: they share a love of sampling across colour, craft and decoration, combining disparate historical influences into one expression.

“There’s a level of detailing that he [Sir John Soane] went to in his interiors – the architraves and the cornices – that we’ve gone to in all of our pieces,” says Jeanes. “Each detail is thought about, every edge perfect, every surface area considered with materiality.”

Though all this is certainly true, it’s also clear that there’s a certain amount of “why not?” involved in the duo’s design process. Because, everything else aside, each item in the collection comes with a healthy dose of what can only be described as charm. As Brudnizki puts it: “The whole point of this collection is to give joy – to make you happy when you look at it. It’s something so important to me personally – that when I come home, I find a place that gives me happiness. That make me say: ‘I just love being in this space.’”

From top to bottom: the “Whickham” chair and ottoman next to a pair of “Marden” coffee tables; the “Waltham” console table; the “Horndean” occasional table; the “Denmead” stool ; the “Candover” daybed; a pair of “Marden” coffee tables; a detail of the “Binderton” sofa; the “Ropley” console table. All images by Michael Sinclair, courtesy And Objects.

“The Rock that’s not: why scagliola is better than marble”, Jonathan Foyle, Financial Times, 2016