A Place Like No Other: the wonders of wallpaper – how Sanderson decorated Britain

Founded in 1860, Sanderson has one of the finest textile libraries in the country, its 120,000-strong archive a source of near-limitless inspiration to its designers today. Rifling through this pristine paper trail of Britain’s decorative history, Inigo feels the pull of the past 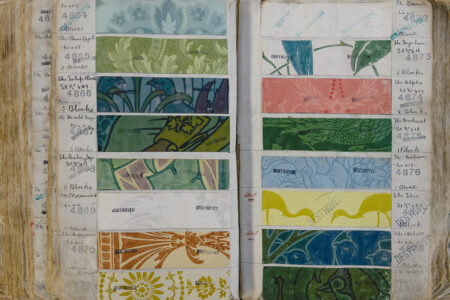 Romance isn’t normally found on the side of the A40. Yet this is a story full of it, set in a building spitting distance from the roaring road. Happily, you can’t hear the traffic tearing past the Sanderson Design Group library, though the sunlight doesn’t get in much either, as the glass is filmed so as not to damage the precious cache stored within. Kept in rolling metal cabinets, hundreds of thousands of documents reside here, filling draw upon tissue-papered drawer. They’re under the prudent jurisdiction and loving care of Dr Keren Protheroe, the textile company’s archivist, who is also in charge of the Herculean task of their inventorying and organisation. “At the last count, we had around 120,000 pieces of fabric and wallpaper pieces here,” she laughs, only a little nervously.

The wonderful thing, Keren explains, is that Sanderson’s is a working archive, used daily by the designers working at Sanderson Design Group, an umbrella company under which brands including Sanderson, Morris & Co and Zoffany sit. As well as fabrics and wallpapers, there are reference books, magazine clippings, photographs – anything that the company’s team of 12 designers can reference for their current collections. An Edwardian botany manual, for instance, could contain a sketched shape that might become a scrolling acanthus leaf that we’ll all want on our walls soon enough. Recently, the group launched Archive, a retro-loving, forward-looking brand whose roots can be found right here, in the hush and dim light of the library, the source and origin of the new brand’s period-inspired prints and palette. Note the Morris-y monograms and vibrant Voysey revamps, for instance.

To understand the immense influence of Sanderson on the history of interiors, we too need to look to the past. The tale begins in 1860, when a stationer named Arthur Sanderson began importing grand French papers – though the archive contains fragments two centuries older than that. As Keren sees it, Sanderson and his employees had foresight and a real sense of pride in what they were producing. “They understood that it was important,” she says, which is why there is such a comprehensive collection of references, spanning vast swathes of time and geography. They knew people would want to look at it.”

Arthur Sanderson himself is interesting, perhaps less as an early wallpaper designer than as a technologist and man of business [the company only started producing fabrics in the 1920s]. Having started his importing business in 1860, Sanderson didn’t begin manufacturing until 1879 – a moment when, for the first time, Britain was starting to be taken seriously in the world of textile design. Historically, the French made the prettiest papers, the Italians the finest fabrics. And the British? “We made the best factories.” A little less glamorous, perhaps, though no less important.

Up to this point, textile designers in England mainly copied the French. Sanderson came along and, with the construction of his wallpaper-printing factory in Chiswick, began producing original rolls. Some designs involved as many as 20 different hand-carved blocks, printed one upon the other. Pulling one such paper out, Keren sighs dreamily. “The colours seem to float above one another, don’t they?” She’s right; they’re luminous. Admittedly, the designs themselves are somewhat derivative – referencing 18th-century Japanese hand block-printed books, for instance – but the colours were for the first time in Britain entirely customisable. Theoretically, papers could be printed in an almost infinite number colourways. Such innovation allowed for mass-production: the golden ticket in the industrial revolution. It also gave the burgeoning middle class something to spend their spare change on.

Sanderson has always been a shaper of trends, Keren explains. “Historically, people were always very anxious about taste,” she says, “especially when it cost so much to do up your house. They looked to manufacturers, rather than to the outside world, to help them make big decorative decisions.” It’s interesting, considering these early papers, to see how involved some of them are. Those made specially for staircases, for instance, with their own borders designed to run up alongside the treads. Unlike today, convenience was not the main priority.

On the other hand, many of the patterns are surprisingly flat, often Asian-inspired and highly stylised. “Arthur Sanderson was keen on getting it right, on getting the right things into people’s hands,” Keren says. “Japan had opened its doors to Western trade in 1853, the South Kensington Museum [later the V&A] had been established in 1852. Arthur knew that fashionable people were interested in looking at fabulous foreign things; he realised he had an opportunity to recreate these designs and put them in people’s homes.”

Arthur died in 1882, not long after his first factory opened, but his son Harold took on the mantel. Harold had trained under a French wallpaper printer and took the company’s production up a notch. He employed freelance designers, advertising in local papers for hand-painted submissions – all of which remain in the archive. Unlike institutions, which only want the most important or innovative things in their collections, “here, it’s anything that could be beautiful, anything that could be useful.” There are written documents too, fascinating snippets of technological and creative history – a ledger, for instance, crowded with cursive script recording the purchases of designs, a wages book revealing how much stencillers were paid.

The company’s appetite for innovations is remarkable. In the early 20th century, Sanderson patented boundary-pushing embossing techniques, for instance, and an early form of air-brushing. What Keren finds interesting, however, is that so many of its wallpapers were still finished by hand. It was, she says, the anti-technology influence of William Morris on domestic design, “who came along and said: ‘Just because you can make it with a machine, doesn’t mean you should.’”

The Arts and Crafts spirit looms large here, both in the library (Sanderson bought up Morris & Co in the 1940s, including all of Morris’ original designs) and in the new Archive lines. The company had been looking into launching a new maximalist brand when, while researching something else, Keren and one of the designers came across a cutting of a CFA Voysey design that showed its whole repeat. “It had the word ‘destroyed’ stamped all over it, but it was there. We knew we could revive it without having to fill in any gaps.” It was a thrilling discovery.

“That’s what I love most about this place,” Keren continues. “You can come into the library looking for something and end up, ages later, having gone off in a completely different arc – a wild visual trajectory.” Sanderson’s rich recorded history is a reminder of the cruciality of references. There is, after all, nothing new under the sun, but when it comes to decorating our domestic spaces, that’s no bad thing. We’re all just humans, trying to make the rooms we live in feel like home – and what better way than to take our cues from those who’ve tried before. No wonder Sanderson’s still going strong.

We’re running a competition with Archive, in which you can win two cushions and two bottles of pre-mixed cocktails. See our Instagram post for details on how to enter. You can read the full T&Cs here.

An exhibition exploring the legacy of William Morris, ‘The Art of Wallpaper – Morris & Co.’, is on display at Dovecot Studios, 10 Infirmary St, Edinburgh EH1 1LT, until 11 June