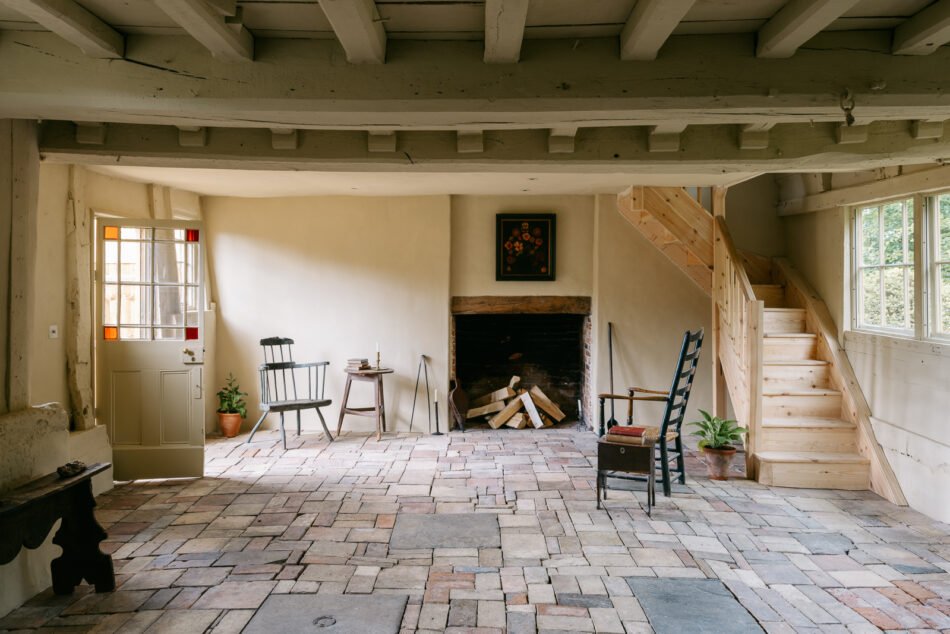 This incredible, Grade II listed, timber-framed Suffolk farmhouse is believed to mainly date from around 1592. The house, which is found in one-half of the original farmhouse, extends over ­­­­­­1,100 sq ft and has been lovingly restored by the current owners during their years of guardianship. To the rear is its own private garden and two handsome outbuildings, which have planning permission to convert into separate holiday accommodation. Well located in the pretty village of Yoxford, the house is a stone’s throw from the coast and the celebrated towns of Aldeburgh and Southwold. Full details of the planning documents can be found here.

The house is medieval in origin but largely dates from about 1592 (with some later additions). The current owners have lived in Yoxford since they bought it in 2008, and when they moved in many of the house’s period features and much of its history were hidden: the walls and ceilings had been straightened with plasterboard, and partitions had been used to create smaller rooms. They undertook an extensive restoration of the house, preserving its character by keeping a plethora of original details while making it fit for modern living.

Set opposite Cockfield Hall, York’s Dwelling is approached down a driveway that leads to parking space for two cars. Entry is straight into the heart of the home to a characterful open-plan dining room, kitchen and sitting room that runs the width of the house, benefitting from a dual aspect and all-day sunlight. This room is incredibly unique, with brilliantly uneven, textured surfaces, from the beams in the ceiling to the wood-clad walls.

To the left is the kitchen, complete with an Aga, marble countertops and splash-back, and a ceramic sink. Opposite sits the original workbench. The more modern appliances could be hidden in a utility room to the rear, where there is also a butler sink and a guest WC. Original flooring runs underfoot; a combination of stone slabs, bricks, terracotta tiles and oak planks. It is thought that this part of the house was once used as a workshop. There is a door from this room which opens into the garden.

A set of original newel stairs leads to the principle bedroom, above the sitting room, where windows frame expansive views of the garden and fields beyond. Coir carpet runs underfoot and new open shelves have been installed on the walls. A second staircase leads from the kitchen to a second bedroom – which would also make a fantastic study – and en suite bathroom. Here red-painted narrow floorboards run underfoot, whilst the bathroom is home to a freestanding cast-iron bath.

Running along the length of the house is a brick terrace, a sun trap in the summer and perfect for outdoor dining. There are also two outbuildings, one clad in red corrugated metal, which used to house the owners’ antique furniture business. They currently have planning permission to connect the two buildings and convert them into a separate guest annexe or holiday home. The rest of the garden, laid to lawn, also has a number of trees. Resultingly the house is surrounded by greenery.

Yoxford, a charming historic village a few miles inland from Dunwich on Suffolk’s Heritage Coast, sits between Southwold and Aldeburgh. The village has two pubs, a restaurant, a post office, a primary school and several well-regarded antique shops. The wider area has an abundance of great pubs, such as The Eel’s Foot Inn at Eastbridge, good restaurants, and wonderful local food suppliers, including Emmett’s Deli. More extensive facilities are available in the nearby towns of Saxmundham (Waitrose & Tescos) and Framlingham (included in The Times’ list of the “10 Best Places in the UK to Live for Families”).

The railway station at Darsham is a three-minute drive, where trains into Ipswich connect with trains to London Liverpool Street.

Please note that all areas, measurements and distances given in these particulars are approximate and rounded. The text, photographs and floor plans are for general guidance only. Inigo has not tested any services, appliances or specific fittings — prospective purchasers are advised to inspect the property themselves. All fixtures, fittings and furniture not specifically itemised within these particulars are deemed removable by the vendor.
Darsham Road — Yoxford, Suffolk
Interested? Let’s talk