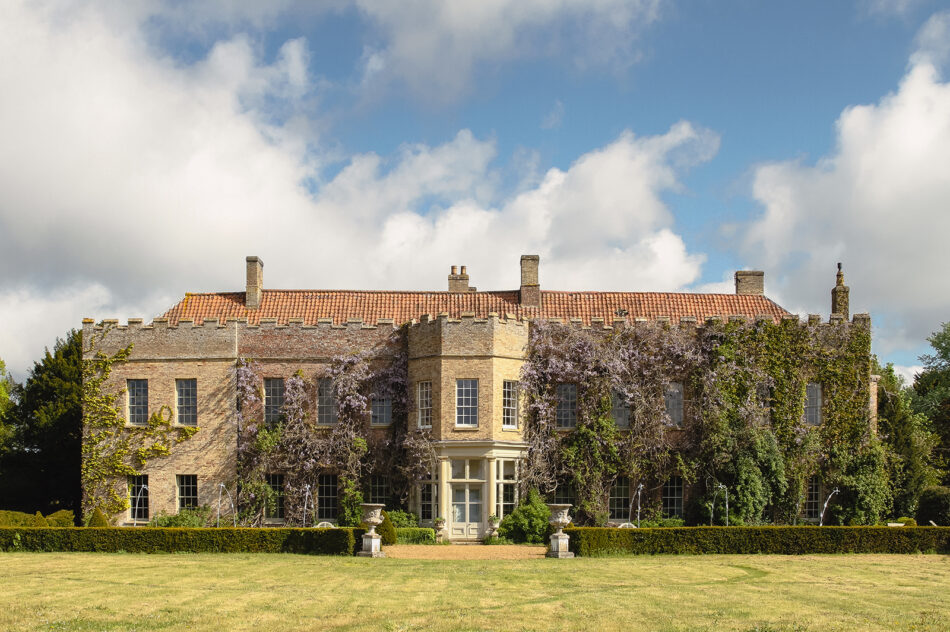 Set in the valley of the River Nar, surrounded by ancient parkland, lakes and woodland

Narborough Hall, an ancient, wisteria-covered, Grade II-listed country house, is set in the valley of the River Nar in Norfolk and surrounded by 79 acres of its own parkland, woodland and lakes. The hall has been the subject of a careful restoration by the current owners, who have stripped it back to celebrate its scale and its countless original features. Decorative period details are abundant throughout, from 18th-century fireplaces to Rococo ceilings and linenfold panelling. The reception rooms and main bedrooms are all south-facing so are bathed in light throughout the day and enjoy beautiful views over the gardens.

Narborough Hall has its origins in the 16th century. The house was substantially altered and enlarged c.1770 to include a dual-bay gaunt brick extension on either side of the front sash windows and a crenelated parapet. In the early 19th century, a service wing extending into the courtyard was added, which now contains an extensive working kitchen.

Now complete with a swimming pool, a barn, two separate annexes, a floristry studio and numerous other outbuildings, the house is enjoyed by its owners and also the public, who have visited the open gardens and held weddings in the house and its grounds. The current owners have made the most of every aspect of Narborough Hall during their time there, running a celebrated café serving home-grown, seasonal produce, cooked on a traditional open fire. There is a cricket pitch within the grounds and Narborough Hall has upheld tradition in hosting the village team for 150 years.

A formal driveway leads from the village to the west side of the house, where there is parking for numerous cars. There is also a less formal driveway, a winding mowed path that snakes across the parkland, taking in views of the superb façade of Narborough Hall and its 13 bays of sash windows from across the lake.

The main entrance, formerly an open porch, is now enclosed by glazing and supported by four Roman Doric stone columns. A two-leaf door and original flagstone flooring open into a handsome entrance hall, where intricately panelled walls have been painted in “Peignoir” by Farrow & Ball. This is the heart of Narborough Hall; the gateway to three voluminous reception rooms with soaring ceilings, original floorboards and floor-to-ceiling sash windows – flanked by their original shutters – that flood the rooms with light.

The hall leads to the eastern wing through the formal dining room, which has a handsome fireplace with an ornate Georgian marble surround. The ensuing open-plan kitchen, arranged around a kitchen island and an Aga, is decorated in a pretty rose-patterned yellow wallpaper. It has a breakfast area with a glazed door that opens to an outdoor terrace, framing views of a fountain and the lake beyond.

Separate WCs and two storage rooms – which would once have been the coal room and scullery – are at the rear of the 19th-century addition. The ex-scullery is still paved with its original tiles and has substantial workbenches, plus a salting sink and table which would have been used for preserving meat and fish. This wing also contains a wallpapered reception room with deep windowsills, a fully fitted commercial kitchen and another large reception room with an open fire for cooking.

In the west wing, there is a further reception room that has beautifully ornate ceiling details, including a decorative phoenix whose claws grip the chandelier hanging below. Beyond is a sitting room, painted Farrow & Ball’s “Tallow”, and surrounded by windows that fill the room with a honey-coloured light. There is a large fireplace and in-built bookshelves. To the rear of the wing is an inner hallway, with shelving running along one side.

Seven incredible bedrooms can be found upstairs. The majority of these generous rooms are south-facing; all are filled with copious amounts of light. Large sash windows frame views over the surrounding parkland. The main bedroom sits at the centre of the house, immediately above the entrance hall, and has wonderful proportions; the current owners have the bed facing the three large bay windows, with an ornate wooden fireplace surround behind grounding the space. Next to this room is a large dressing room, the walls lined with fitted cupboards, while a pink-coloured bathroom adjoins the other side. Each room on this floor has a distinct colour scheme – often based on the charming patterned wallpaper – and consequently a unique character and atmosphere.

The attic rooms on the second floor are currently used as a storage space, but could be converted in the future.

At the rear of Narborough Hall are a variety of outbuildings and annexes organised around a courtyard planted with trees. There is currently a working floristry studio to one side with an office next door. Behind that is a separate rentable, one-bedroom annexe, with a kitchen and living room. Along the top edge of the courtyard is a second annexe, which again has a kitchenette and bedroom, as well as two garages next door.

The current owner is an avid gardener, and the grounds have been described by Country Living, The English Garden and Country Life as one of England’s most truly “Romantic” gardens. The grounds have been re-wilded over the years so are a haven for wildlife, as well as native trees and flora. There are a variety of self-seeding plants, herbs and fruit in the gardens, while the woodland is filled with snowdrops and other delicate flowers.

The summer sees Narborough’s flowers in full bloom, borders overflowing with an abundance of colour and life. The lake is full of waterlilies, rambling roses cover the exterior of the house and the “blue garden”, filled with fragrant herbs and lavender, fills the air with perfume. A kitchen garden contains numerous fruit trees and vegetable patches, and there is an extensive greenhouse with potting sheds.

There is an outdoor swimming pool in the sheltered old stable courtyard, which receives sun for most of the day. There are changing rooms within the stables, as well as a sheltered dining space and a working kitchen. An adjacent, capacious barn provides the perfect space for parties.

Narborough Hall is in a fantastic position, enjoying all the benefits of rural Norfolk while also benefiting from its proximity to King’s Lynn (which has a direct train to King’s Cross). Narborough itself is a very pretty village, with Narborough Church and the hall at its centre. There are several monuments within the church to the Spelman family, who built Narborough Hall in 1528.

The picturesque Norfolk market town of Swaffham is five minutes away and has a Waitrose, whilst the beach at Brancaster is only 30 minutes away. The coastal villages of Burnham Market and Holt are also close by. There is a strong art scene in this part of Norfolk, with Houghton hosting artists of international significance throughout the summer, as well as a music festival. The surrounding district of Breckland is a very “foodie” area and there are plenty of artisanal breweries, organic produce and great cafes within a few miles of Narborough. Several National Trust houses and Sandringham, are in close proximity.

There are many larger towns nearby too. King’s Lynn is the closest, home to numerous shops and supermarkets. Just under an hour’s drive away is Norwich, a thriving small city with a diverse range of cultural, dining and shopping opportunities. The Lanes, a series of medieval streets in the city centre, was a winner at the Great British High Street of the Year Award in 2014. Cambridge is a short train ride away, or just under an hour and a half by car. Famous for its university and college buildings, it is home to numerous pubs, shops, parks, a weekly market and the River Cam – perfect for a weekend jaunt.

Please note that all areas, measurements and distances given in these particulars are approximate and rounded. The text, photographs and floor plans are for general guidance only. Inigo has not tested any services, appliances or specific fittings — prospective purchasers are advised to inspect the property themselves. All fixtures, fittings and furniture not specifically itemised within these particulars are deemed removable by the vendor.
Narborough Hall — Narborough, Norfolk
Interested? Let’s talk