A Room of One’s Own: how Skye McAlpine brought open-plan living to her Victorian kitchen

Inigo drops into the wonderfully welcoming living, dining and eating space of the London-based food writer 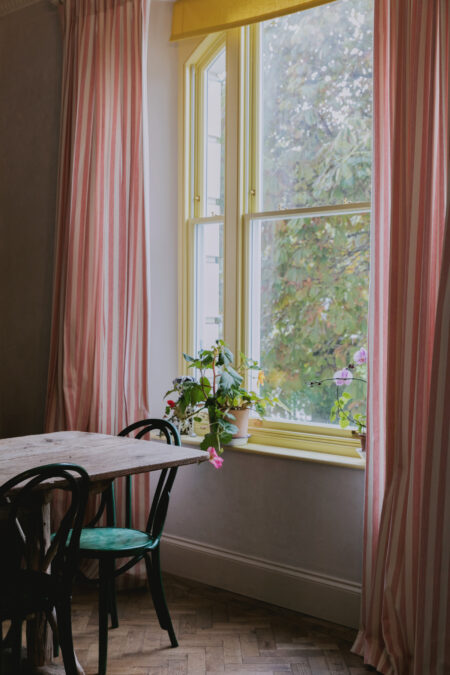 Food writer and author Skye McAlpine lives with her family in a large, light-filled Victorian terraced house in southwest London. But a lot of that living – specifically, working, eating and entertaining – takes place in her beautifully renovated open-plan kitchen, which she designed along with her close friend, the architect Ben Pentreath. Whether it’s hosting a dinner party for 30 guests or just chatting to her son about school; photographing her latest culinary creations or simply pottering about on a Sunday morning, Skye’s kitchen is the beating heart of her home life. Here she tells the story of how she created her perfect room – and why she loves open-plan living in a historic home.

“We moved in at the end of June 2019. We were living two streets over and not really looking to move: we loved our flat and we’d done a lot of work to it. It was a lateral Victorian conversion of two apartments situated over two restaurants. It was all on one floor and it felt really big.

“But I had to go away for work for 10 days, and my husband was in London by himself. I don’t want to say he was bored, but… he was bored. He started searching properties online and just happened to find this large Victorian house right around the corner. He sent it to me and said: ‘What do you think about this?’ The interiors were really tired and it had been sitting empty for a while, so it looked quite sad. But straight away I thought it was perfect. Five days later I was back in town, we went to see it and we put in an offer.

“We worked with Ben Pentreath to re-install character to the house. It was a real joy to do. The whole project became an opportunity to design a dream period home.”

“What I love about this house is that all the floors have really high ceilings and big windows, which let in a beautiful light. The house is on a busy road, so it’s a little bit noisy. But we’re in London – it’s always busy and noisy! It’s a compromise but it’s one I’m very happy to make. We don’t have a garden per se, but we do look out onto the park which gives you this amazing feeling of space.

“It’s part of a row of Victorian houses that had been bought by a developer in the early 1990s. They had knocked everything out and redone it quite cheaply and soullessly. That meant the interior of the building had absolutely no architectural merit whatsoever, so it was a blank canvas to work on, and we didn’t have to go through any complex planning procedures.

“When we purchased it we worked with a friend of mine, the architect Ben Pentreath, to re-install character to the house. It was a real joy to do; the whole project became an opportunity to design a dream period home.

“Ben and I share quite similar tastes, and because we’re friends it made it really fun. Ben had visited our old place so many times and he knows how I cook and entertain. He knew exactly what the space would be used for, so it was a little bit like working in shorthand.

“I knew when we moved in that we would completely redesign the kitchen space. The dining room and kitchen were two separate rooms and it felt a lot smaller. The kitchen was also where the dining room is now, so we swapped that around. The kitchen also featured a very early 2000’s oval kitchen island, which we ripped out straight away and made the two rooms into one large room.

“Ensuring that the space was open was non-negotiable for me, it’s where we spend most of our time. I’m often still cooking when friends come over; I’ve always got the bulk of it done, but I’ll be tossing a salad or dressing something and I love cooking while I chat.

“I was reading an article recently that said there has been such a move towards open-plan living that maybe we’ve gone too far, and maybe we have – but I really love it. I just think it is so wonderful to have one room where you want to live and eat and be together.

“The light in here is so lovely… it’s where I do a lot of my photography.”

“The one thing Ben and I talked about from the beginning for the kitchen was replacing the French doors with new frames so that as much light can be let in as possible. The light in here is now so lovely and it’s where I do a lot of my photography. Some of the decisions we made in the kitchen also played out through the rest of the house. We have installed parquet flooring across the house and continued the cornicing throughout as well.

“For the colour, we took a lot of inspiration from our kitchen in Venice: we wanted it to have a dual tone to it. In the end we went with two shades of Farrow & Ball yellow – we took Monet’s kitchen in Giverny as another point of inspiration.

“In our old place we had this lovely old Lacanche cooker that we had purchased second hand. So the one thing I knew I needed for this kitchen was a larger Lacanche, and we got the largest one they make. It’s huge: two full ovens, two half ovens and about 12 or 15 hobs. Ben was a really good sport. He said, ‘You do know this is a massive cooker, right?’ But he understood how important it was to me and he made it work.”

“The other thing I wanted to replicate from our old place was that the kitchen-diner space should be flexible – which is so important for me because I use it for my work and for hosting parties for friends, as well as it being a family space.

“The kitchen island is an old table on wheels which we put a marble top on, so we can wheel it around to make room or put it out on the patio. We also have some trestle tables so we can extend our dining table into one long table across the two rooms; that can seat up to 30 people.

“I love this room in the summer months: when you wake up really early the light is a dream.”

“There’s an armchair over in the far corner that is my favourite space in this room, it’s right by the French doors in the area between the cooker, the kitchen island and the sink. It’s everyone’s favourite armchair so it’s always a bit of a competition who gets to sit there. If I’m not cooking, I’ll sit there and do my tapestry and chat to my husband as he cooks, or my son will sit there while I’m cooking and tell us about his day.

“I spend so much time in here. It’s such a happy place and on a spiritual level, it is such a mood lifter. The room is so welcoming, and it’s so nice for me to have people around while I’m doing my work. On a practical level, the space is designed so that it works for my work. Having this amazing light means that I can photograph while I’m cooking and don’t have to pause to create a staged set-up.

“I love this room in the summer months: when you wake up really early, the light is a dream. My ideal scenario is to go down in the morning before anyone is awake and potter around in the kitchen. If we are having people over for dinner, I might make a pudding before anyone is up and then I don’t need to think about it later.

Skye McAlpine, A Table for Friends, 2020