A Home with a History: Nolan Watson's masterful mise-en-scènes in a Kentish cottage

The founder of Tyssen England talks slow decoration, the importance of stories over surface beauty, and how his 17th-century house in Deal helps bring meaning to his wondrous wares 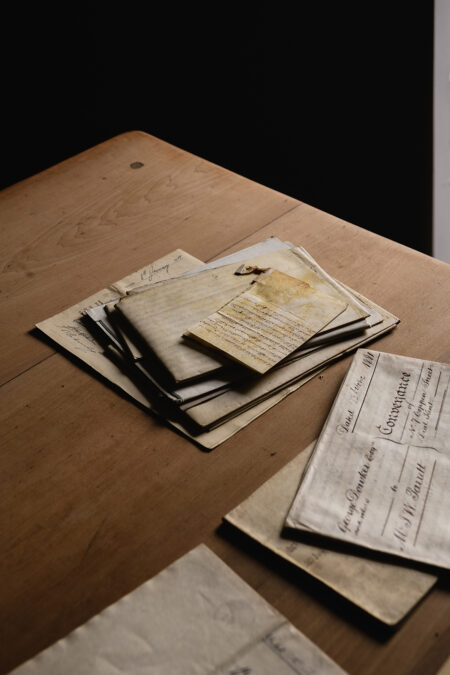 Sunlight skews into Nolan Watson’s darkly panelled sitting room. If there was a mote of dust in here, it would be dancing in the rays. There isn’t, of course, for everything in the collector-turned-dealer’s house is just so. A self-confessed perfectionist, Nolan lives in a 17th-century cottage that backs on to a former farrier’s yard, perpendicular to the shore in Deal, on Kent’s southern coast. He bought it with a friend, Andrew, who was retiring, while Nolan “desperately” wanted a weekend house. They pooled their money and bought a modern flat in London plus this seaside spot. Andrew, who holidayed on the south coast as a child, was initially dubious about Deal, saying “Oh, no. It’s full of old people. We’d only go there when it rains.” They arrived to find the opposite, says Nolan. “It was love at first sight.”

They didn’t plan to live together – but they didn’t plan for a pandemic either. Having moved here for lockdown, the pair have since been residing in Deal almost exclusively, sharing their home with Frankie the labradoodle. It’s a charmingly old-fashioned set-up, but a sensible one too: Nolan is among the eaves, while Andrew has taken the middle floor for his quarters. Frankie, meanwhile, knows no bounds. “Andrew has the grandest room in the house,” Nolan explains. “Every time I walk in, I say: ‘Oh, you could do this. You could do that.’ The answer is always no. Point-blank.”

As well as being filled with Nolan’s own cherished treasures, the house plays host to the passing cast of furniture and objects that eventually make up the stock of Tyssen England, his online antique shop. Candlesticks, mirrors and pottery are displayed, photographed and enjoyed before being put on sale. Nolan likes to know “the stories” of the things he trades in, which, he says, can only be learned from living with them. His approach to decorating is similarly unhurried, pensive and steeped in a desire for authenticity. But, as he explains below, there’s method to his meticulous mise-en-scènes – they’re all in the name of beauty.

“You wouldn’t think it now looking at the house, but this was once just a small cottage, like those next door. It was one room wide – the living area had a staircase and a small doorway into the kitchen at the back, which is now our dining room. The house was built in 1670, but aggrandised at some point in the 18th century, when they extended into the alley that ran alongside the house to the farrier’s yard behind. They just tried to make it a bit more fancy.

“The panelling in the sitting room is interesting. It’s pine, which, in the 17th century, was exceptionally rare; most things were oak. The only places you find pine are near shipbuilders’ because they would import the spruces, which grew very quickly, for boat-building. Sadly, the last owner of this house decided to sand these panels back and varnish them. It was just awful. It looked like a sauna. I so desperately didn’t want to paint it, so I used an ebony spirit stain, which is nice because it covers up the knots. Pine was never designed to be exposed.

“Both the kitchen and the bathroom above it are not part of the original house, as it were, but are in the neighbour’s garden. You see this all over Deal – people buying each other’s gardens and extending every which way. The layouts of these houses are all a complete mess, but what I like about this one is that all the modern necessaries are off to the side and not in the original integrity of the house. It’s so sad when, in these beautiful old houses, you see that the floor has been ripped out for plumbing. I know it all gets covered up again, but there’s something about the lack of historical sensitivity that bothers me. I just want to see some things pared back as they originally were. It’s probably just me being a perfectionist.

“I did the kitchen on the cheap, as there’s not much we could do with the space. It’s an awkward, funny shape. I suppose you could call it a modern room, compared to the rest of the house. The old kitchen – which confusingly I still call the kitchen – is now our dining room. It was sodden when we moved in, as the floor is sunken and there was no drainage in the garden. We had to fix it from the inside out – new joists and everything. There were about six layers of plasterboard on the outside wall that had to go. It was a bit of a blessing really – I hate plasterboard. Now we’ve got nice hand-plastered walls.

“The panels in here are my favourite in the house. They’re just floorboards and I think they’re fabulous. The iron stove is from the 19th century. The conservation officer said we wouldn’t be able to take it out. It has nothing to do with its originality – it’s not original to the house – it’s down to the fact that there are so few left in situ that they want to keep them in place. That’s what I love about conservation: it’s not about beauty, it’s not about originality; it’s just about keeping examples in place. That stove is not beautiful, but the story is.

“There’s such a rich history to this house. We have a trove of beautifully scribed vellum documents here, the possession of which has just transferred from owner to owner with the building. They record things like indentures and mortgages; one lists every owner of the house. Some date back to the 17th century, so we can almost guarantee that there have been no house fires.

“If there was a fire, it’s impossible to say what I would save. I’d have to just put the fire out! That said, I try my hardest not to get sentimental about objects because I don’t think it’s healthy, but the fact that there are some things I wouldn’t ever consider selling shows my attachment. Everything else is fair game.

“The more you look, the more opportunities you find”

“I left my job in publishing before Covid and threw myself into dealing, I think for two reasons. Firstly, I needed a career for myself and there’s only one thing I’m competent at and know well: antiques. Secondly, I had this house to decorate. When you’re trying to fill somewhere, you’re looking and looking. The more you look, the more opportunities you find. Everything I buy for Tyssen England sits here for a while, even if it’s just for a few weeks. I joke and call the house ‘the shop’. As a trader, I don’t feel able to just appreciate things from an aesthetic point of view, I have seen them from a romantic point of view as well. I suppose that’s what you call discernment: the more you learn about these things, the more you realise there’s so much more to them than their face value. That’s how you build your taste – you see more than just how things look.

“I moonlight as an interior designer and, whenever I think about decoration, I think of my grandparents’ house. We now call it ‘slow decoration’. Theirs was a collector’s home. They are exactly who I get it from. Even though they appreciated architecture, I don’t ever think they thought of decorative schemes. They never thought about paint colours or wallpapers or fabrics. They simply thought of the things in that house and the beauty of them.

“Interior design isn’t about waltzing around with a mood board and samples. Those things are important too, but what you’re looking for is a foundation and pieces to live with – things that make you sigh with relief that you can call them yours. That’s a beautiful home.”