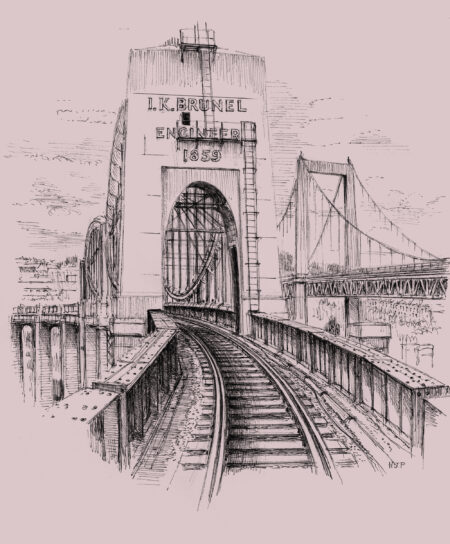 For William Blake, the “dark satanic mills” of Britain’s industrial revolution symbolised the loss of the country’s pastoral innocence. It’s an image that has fallen into the popular imagination – factories coughing black smoke into the air, cities cloaked in smog, cramped and unpleasant working conditions – but it is one that overlooks the groundbreaking architectural achievements that accompanied Britain’s industrial heyday.

Industrial Britain: An architectural history, a new book by architecture writer Hubert Pragnell, seeks to reassess the cultural significance of Britain’s industrial heritage. Featuring more than 200 line drawings of the buildings and engineering projects that shaped modern Britain, the book asks why the structures that still define skylines and landscapes throughout the country do not receive the same attention from architectural historians as cathedrals, castles and country houses. As Pragnell writes in his introduction, “Can it be right to destroy the buildings and landscapes that created our so-called greatness?”

Throughout his book, Pragnell encourages us to think of the nation’s factories, mills and canals not only as artefacts of Britain’s industrial heritage but as vital contributions to the architectural discourse in this country. By the Victorian period, industrial buildings were embellished with ornamentation usually reserved for manor houses and great buildings of state – railway termini sculpted in classical or gothic traditions; power stations given chimneys that were inspired by domestic Venetian chimneys, or, as is the case in Battersea Power Station (at the time, the largest brick structure in Europe) a control room panelled in Italian marble. Even sewage works were carefully and elaborately worked, including Crossness Pumping Station in London, which architectural historian Nikolaus Pevsner described as “a masterpiece of engineering – a Victorian cathedral of ironwork”.

These temples to power and progress were designed by some of the greatest architects of the day. Some are well known, like Sir Giles Gilbert Scott, who designed Battersea Power Station and Liverpool Cathedral as well as the iconic red phone box; others are less celebrated, such as Karl Bernhard, who is responsible for the strikingly modernist North British Railway Company engine hall in Glasgow. In foregrounding both, Pragnell’s book is not only a record of the buildings that tell the story of a rapidly industrialising nation but a testament to their importance in the history of British architecture.

If the 19th century was a period of rapid industrialisation, the 20th century was one of a shift away from manufacturing to a reliance on imports and service industries. The air in Britain’s cities might be cleaner and working conditions may have improved, but with the business of making things and producing energy outsourced to other countries, we are in danger of forgetting the processes and pollution that are still necessary in creating the world we live in. With many of these now obsolete industrial buildings facing uncertain futures, Industrial Britain is a timely reminder of both our continued reliance on heavy industry and the threatened heritage of Britain’s industrial landscapes. “Take a camera or sketchbook,” Pragnell implores his readers, when encouraging them to visit some of the sites in his book, “before it is too late.”

Industrial Britain: An architectural history by Hubert Pragnell is published by Batsford and can be purchased via Waterstones