A Home With a History: artist Russell Loughlan on how he used colour to reconnect with the history of his Georgian terrace house in Deal, Kent 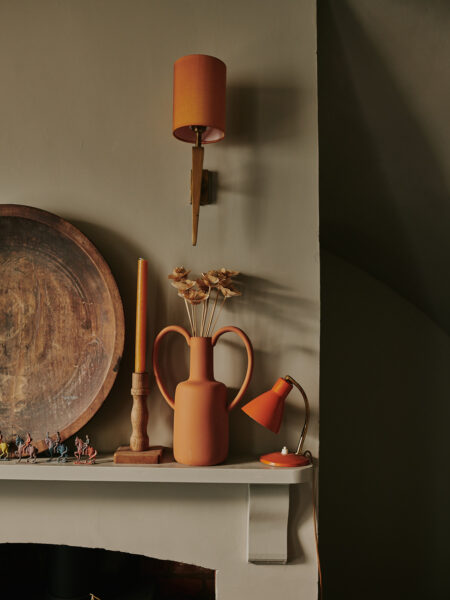 Artist Russell Loughlan and his husband were on a road trip to Deal in 2005 when they fell in love with both the town and a house on Dolphin Street – a historic seafront location. Sixteen years and three moves later, they found themselves back on Dolphin Street undertaking a sensitive, and challenging, renovation of a Grade II-listed Georgian terrace, untouched since the 1960s.

Below, Russell tells us how a minimal approach and bold colour palette have reinvigorated the home, allowing the bones of the building and its textured history to shine through.

“Each move brought us closer to the sea”

“We’ve moved around a lot within Deal, which has partly been down to my drive to get as close as possible to the sea. The first place we bought in town was actually on Dolphin Street and, now, almost 16 years later, it’s lovely to be back. Each move has brought us closer to the seafront and I finally have the sea view I’ve always wanted.

“Before moving to Dolphin Street we lived in a renovated old bike shop in the centre of Deal. The local estate agents know I’m a bit property obsessed so always give me a call when there’s something new coming to market. This house was lined up for auction, but I managed to sneak in an offer before the auction went live.

“The house was built in 1768, is Grade II-listed and had been pretty much untouched since the 1960s. It was a holiday home for years and it was all magnolia gloss, thick carpets, haphazard layout and no heating. The house had lost its period features and been altered before it achieved listed status, so there was a lot to do in terms of making it livable and restoring it, as much as possible, to its original state.

“The renovation started in October 2019 and we expected it to take around four months. One month later and the kitchen was in and the builders were making great progress when they discovered live woodworm in the rafters. We had to stop work immediately. It turned out that the inside of the house was essentially a broken umbrella – there was nothing holding the rafters to anything. Every single floor and ceiling had to be replaced and our renovation budget was completely blown. It was incredibly stressful. What should have taken a few months took over a year to complete.

“I wanted the house to speak for itself”

“But in that time, I feel like we’ve coaxed the building back to life. A large part of that was about restoring period features; the largest job was recreating the wood panelling. We copied the one remaining original piece of panelling and replicated it throughout the ground floor. One element from the sixties did survive: a low-level partition between the kitchen and the front room which we rebuilt. It makes for a great cocktail bar. As the glass panels can also be closed, it means we can section off the front room and kitchen, which helps keeps things a little warmer when the sea breeze is whistling through the house. The interior is minimal because I wanted the house and its past to speak for itself. On the ground floor, we have a piece of art on each wall and that’s it – I want the panelling and the colours to do the work.

“It’s a top-heavy house, and the change in light as you move between floors has informed how we decorate the space. The ground floor is dark and we’ve used a strong, Georgian-inspired colour palette. It’s probably the boldest I’ve been with colour but it gives the space character, so much so that our front room has been nicknamed ‘The Dolphin Street Tavern’ by friends – it’s got a definite Dickensian feel to it. We decided not to have overhead lighting in most of the house, which lends itself to the heritage of the building and keeps the rooms cosy and intimate.

“Stripes are a labour of love”

“In contrast, the first floor is flooded with light and is decorated in a palette of greens and blues. I have something of a stripe fetish and had wanted to work with block prints for a while. I thought that hand-painting a striped effect in the bedroom would be the perfect way to indulge my love of stripes. Suffice to say it was not straightforward – there’s not a single level wall in the entire house, so by the time I was on day three of taping the walls I did think ‘What have I done…?’ It was a labour of love and my neck is still recovering, but I’m so happy with the finished effect, which is quite hypnotic and, unexpectedly perhaps, very calming.

“I’ve moved many times, undertaken a lot of renovations and I can safely say that this house is my favourite by far. There’s something about the colours, the light and the building itself that is really inspiring. It’s the space where I feel most creative.”