Inigo delves into the layered past of London’s Huguenot houses, an enduring symbol of Spitalfields and synonymous with the East End 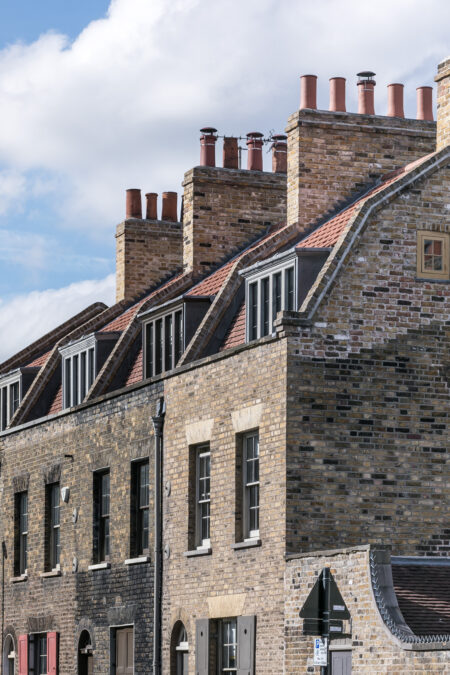 Spitalfields – an area known for its thriving markets, buzzing nightlife, and iconic curry houses – is also something of an architectural marvel. Quite apart from Nicholas Hawksmoor’s famed Christ Church, the East End is home to colourfully restrained, early Georgian terraces that line its cobbled streets. The legacy of Huguenot silk weavers who established their trade there in the early 18th century, these houses stand as a testament to the area’s extraordinary transformation and cyclic renewal.

Positioned just outside the City of London, in the right angle between Bishopsgate and Aldgate High Street, Spitalfields has always been associated with alterity and is historically a magnet for migrant settlers, as foreigners unable to join the city’s guilds would set up businesses on the edges of their jurisdiction instead. Its name derives from the Priory of St Mary Spital, which served as a hospital shortly after its foundation in 1197. At the time, the surrounding land was simply open fields – hence the name Spitalfields. By the time the Huguenots settled in the area, it had become more developed, with timber-framed buildings and narrow streets intersecting just outside the city gates.

In 1685, over 50,000 Huguenot Protestants arrived in Britain, fleeing religious persecution in Catholic France. Around half settled in London, provoking general alarm. Peter Ackroyd, in his seminal biography of the city, writes that “The Huguenots were accused of trading secretly among themselves and of engaging in illicit commercial practices… they were held directly responsible for London’s overcrowding.” Predominantly clockmakers and silk weavers, the Huguenots established their homes and workshops in Spitalfields.

Following the Great Fire of London, which destroyed some 13,000 houses in the city, the rules on construction changed: buildings had to be made of brick, devoid of their previously flammable timber cornicing and decoration. Out of this emerged the classic townhouse design, with simple, unadorned front façades that prevented flames leaping from one wooden moulding to the next. Many of the houses in Spitalfields today were built speculatively in the early 18th century by Huguenot builders hoping to find tenants for their short-term land leases. They built the terraces with cheaper, pine interiors, and according to a temporary, stylistically outdated plan. They were not expected to last – but miraculously, they have. Amidst the cobblestones of Spitalfields remains the largest collection of early Georgian terraced houses left in London, with over 200 still standing today.

Historian and resident Inigo expert Ellen Leslie sheds some light on how the Huguenots lived in these remarkable buildings. “Often, houses were also workshops for the craftsmen – they have additional upper storeys that are lighter in weight. The more established silk merchants were less likely to have workshops attached to their houses (for instance, lots of the houses on Princelet Street would have simply been homes for merchants and their families). But for those who did combine living and working, these timber elevations would store the looms and had big windows to make the most of the light, so that the weavers could keep working later in the day.”

The Huguenots’ heyday continued until the end of the 18th century, when cheaper woven silks became available from overseas. In the 1820s, the repeal of a 1764 Act prohibiting the import of French silks meant that the weaving industry fell into decline, and the Huguenot community moved to other areas such as Soho. Spitalfields became impoverished, and its terraces neglected.

However, the history of this area is one of fascinating regeneration. Throughout the 19th century, Irish and Jewish communities migrated to the East End, the latter following a series of pogroms in Europe. They settled in the houses vacated by the Huguenots, building workshops out into the back gardens for their tailoring businesses.

The mid-20th century onwards saw new waves of immigration to Spitalfields, as Bangladeshi workers flocked to join its long-established garment trade. Indeed, the garment industry is the predominant theme running through this area, from its historic origins in silk weaving to tailoring, textiles and leather today. The traditions of the Huguenots thus never fully disappeared from these streets, and this kind of layered history is what makes Spitalfields so unique.

In recent years, the area has undergone an entirely new regeneration. Having been threatened by bombing, demolition and expansion, the 1970s saw new measures put in place to refurbish and improve its older, dilapidated dwellings. In 1976, a group of influential architectural historians and conservationists founded the Spitalfields Trust, a charity that works to preserve and repair at-risk buildings of historical and architectural importance. With major developments encroaching on the area and planning permissions recently relaxed, their work is ongoing, but has already seen the region transform into a creative hub. Known for its long-standing attitude of freedom and alternative expression, it is also an artistic stomping ground, with recent residents including Gilbert & George, YBAs Tracey Emin and Dinos Chapman, and the writer Jeanette Winterson.

That the Huguenots’ houses have prevailed throughout centuries of change is what makes them so special. Ellen notes that they are rare “because there is so much original material and fabric within the buildings. Walking in is like going back in time, and the people who live there keep the ethos of the house, they don’t gut it. It’s a very particular way of living and takes a particular kind of appreciation for the house’s built history.” A lasting symbol of Spitalfields and its multifaceted heritage, the presence of these houses wordlessly tells the story of their past.

Brushfield Street, located in the heart of Spitalfields Market

Dan Cruickshank, Spitalfields: The History of a Nation in a Handful of Streets (Cornerstone, 2016) via Blackwells