Past Lives: five homes for sale with unconventional beginnings

From converted chapels to ex-military HQs, these historic buildings have been more than just residences 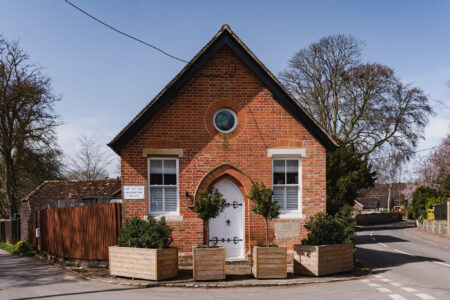 It’s one thing to try and imagine the people who inhabited your home decades, or even centuries, before you arrived. But it’s another matter entirely attempting to picture your home before it was a home altogether. The background of historic dwellings are often so rich and storied that, if you peer back far enough, you’ll discover a time when they may not have been residential spaces; perhaps they were where fashionable hats were once made, where horses were kept, or where churchgoers would gather. Here, we’ve picked five homes currently for sale that had fascinating past lives…

This converted chapel is situated in the quaint village of West Ilsley, in Berkshire. It was originally built in 1887 and, due to the current owners’ sensitive restoration work, still maintains a number of features which nod to the building’s ecclesiastic beginnings. For example, at the front of the chapel are its original arched doors. Beyond lies a double-height room that would have once accommodated worshippers – now there’s not a pew in sight, but instead a light-filled living and dining area. An oculus window with stained-glass detailing and the exposed-oak ceiling trusses act as additional reminders of typical chapel architecture.

Tucked down a passageway in Spitalfields – an area of east London that’s long had close ties with the garment-making industry – this Grade II-listed home was once used as a millinery and weaving workshop. Inside, its current owners have made a concerted effort to stitch together old and new; so while there are contemporary comforts like a roof terrace and Plain English kitchen suite, there’s also a host of antique details. On the ground floor, for example, there’s a Belfast sink that was likely fitted in the 19th or 20th century, and a recessed archway which is believed to have once held a display case for the milliner’s selection of ribbons.

Many have passed through the doors of this Grade II-listed townhouse that sits on Hawley Square in Margate. Constructed in the late 1830s, its earliest occupant was believed to be a blacksmith called John Sitpard Witherden who ran his business from a shed in the back garden. The building was later occupied by a cabinetmaker, an auctioneers and eventually served as a headquarters for military regiment the 4th Battalion of the Buffs – they stayed put until the 1970s, when Thanet District Council moved in. The current owners worked alongside Sam Causer Studio to carry out a complete restoration, but preserved the building’s original floorboards, wooden panelling and worn plaster walls to give a sense of times past.

Located in the heart of Bethnal Green, this live-work space occupies a stable block that dates back to the Victorian period. The current owners have implemented features that pay tribute to the building’s industrial past – note the wrought-iron entrance gate, polished concrete floors and Crittall-style partitions. Other areas of the home, however, are an all-out celebration of colour, pattern and texture, from the acid-stained copper kitchen to the living room’s buttery yellow walls. The end result is a joyous fusion of maximalism, historicism and modernity.

A hatmakers, grocers and jewellers have all occupied this Grade II-listed building at one point or another. Found in London’s East End, the building dates back to the 1770s – the signage of the Victorian-period milliner can still be seen above the front door. For the first time in 20 years, it’s been offered for sale to include the three-bed flat directly above, which boasts original fireplaces, hardwood floorboards and a cast-iron Victorian stove. Should the next inhabitant choose to set up shop on the ground level like their predecessors, they have the opportunity to continue the building’s legacy as a space for work and living.