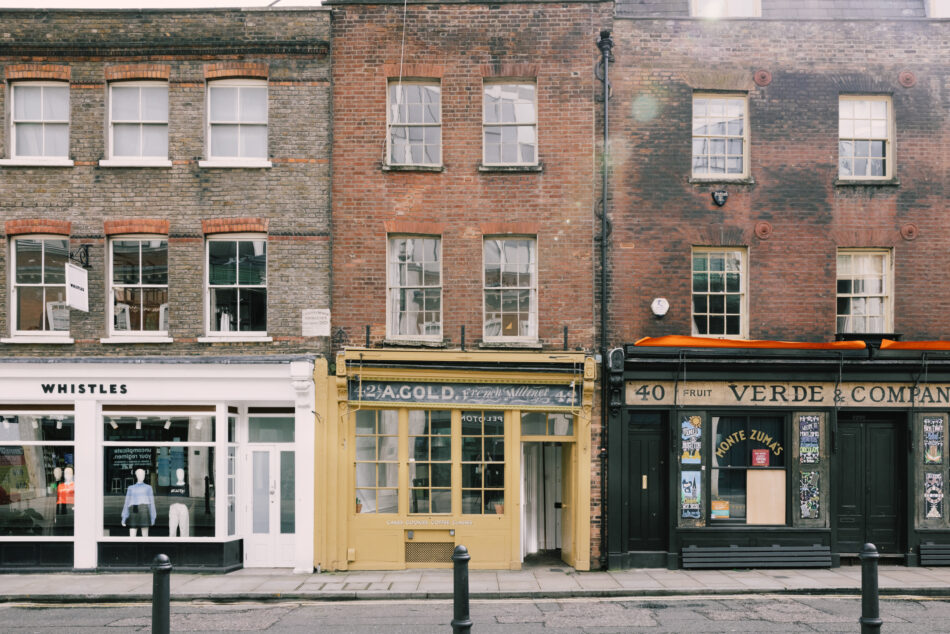 This beautiful Grade II-listed building sits in the heart of Spitalfields Market on Brushfield Street. For the first time in over two decades, it is offered for sale including a three-bedroom apartment directly above, with a private roof terrace at the rear. Thought to have been built in the 1770s, the space retains the original signage of a Victorian milliner and represents an incredibly rare opportunity to live and work in one of London’s most popular historic markets.

Brushfield Street is in the heart of Spitalfields, opposite the southern perimeter of Spitalfields Market and on the northern edge of the Artillery Passage Conservation Area. The building dates from the 1770s and has an incredibly rich history having been used variously over the centuries as a milliner, a grocer’s warehouse and a series of jewellers’ offices (the space retains its reinforced security measures at street level).

The street-facing façade of Brushfield Street is characterised by its traditional Victorian shop frontage sheltered by an awning overhead, with wooden-framed armoured-glass panes and specially fitted shutters. Above the ground floor, the traditional red brick apartment has large sash windows, rising three storeys to a mansard with elevated views over the market and Hawksmoor’s Christ Church at the end of the street.

Access is gained via a shared hallway. The shop occupies the whole of the ground floor and is replete with tongue and groove panelling and original hardwood floors, with characterful repairs carried out over the ages. It currently has an A1 commercial designation. To the rear, an office area has been created with a fireplace containing a cast-iron Victorian stove. There are built-in shelves along one wall and the wonderfully bright space has views directly out onto Bishops Square. The basement is a large and versatile storage space, having served multiple purposes over years. It also has a plumbed utility room and bathroom.

Entrance to the apartment is via a secondary door on the ground floor. A bright living room sits at the front of the plan on the first floor, complete with original floorboards, a fireplace, built-in shelving and excellent views over the market below. This space leads through to a dining room containing a further fireplace with a Victorian stove, down to a modern kitchen at the rear of the plan.

The second floor has two bedrooms and a bathroom. The rear bedroom has an unusual box-bed of an unknown date and generous amounts of storage built into the fabric of the building, believed to be from near the period of construction. The master bedroom to the front benefits from generous sash glazing and storage space, while the first floor bathroom has a large roll-top bath and an original fireplace.

On the second floor, there is a further double bedroom to the front of the building and a bathroom with stable doors which opens onto a charming private roof terrace at the rear. This space is perfect for dining outdoors in the warmer months – and even the colder ones, as long as you don’t mind braving the British weather.

Spitalfields has been home to a functioning market for over 350 years. Licensed by King Charles I in 1638, the market has since become renowned for its terraces of Huguenot cottages and lively atmosphere. At the turn of the century, cheap studio space and restaurants like St. John, Mark Hix’s Tramshed and the Golden Hart pub attracted the Young British Artists; the area has enjoyed almost unparalleled popularity ever since.

The neighbourhood surrounding Brushfield Street is renowned for its vibrant cultural life. The art galleries at Truman Brewery, Modern Art, Maureen Paley and Raven Row are all within walking distance. The restaurants, bars and pubs in Shoreditch are amongst the best in London and include St John, Lyles, Brat and Clove Club, as well as more casual offerings at Brawn and Rochelle Canteen.

The city’s financial district is within walking distance, as are the stations at Liverpool Street, Aldgate East, Aldgate and Shoreditch, offering Underground, Overground and National Rail services.

Spitalfields: The History of a Nation in a Handful of Streets by Dan Cruickshank

The shop and flat on Brushfield Street are located inside what used to be Henry VIII’s artillery ground, where soldiers practised archery and musketry during the 16th century. Allusions to this combative past persist in the names of some of the neighbouring streets: Gun Street, Fort Street and Artillery Lane, as well as Tenter Ground, where gunpowder was laid out on sheets to dry. The lead arrow on the edge of the Brushfield Street façade marked the boundary of the old artillery ground and the land that Henry VIII commandeered after the dissolution of the Priory of St Mary Spital. Contemporary excavation in the area routinely reveals musket and cannonballs.

The shop and accommodation were built in the late 1770s on what used to be called Union Street. From 1889 to 1892 the shop was occupied by its most famous resident, a Jewish-Hungarian immigrant called Annie Gold. Her shop sign sits above the door to this day, advertising her trade as a milliner under the moniker A. Gold. Since Annie’s occupation, the shop and upstairs apartment has been used as a jeweller and diamond cutter, a furrier, a bootmaker and as temporary lodgings. It was a functioning fruit and vegetable warehouse right up until the relocation of the original fruit and vegetable market to Leyton in 1991. The Spitalfields Trust took it over and saved the space from demolition.

The shop and apartment were painstakingly restored by a local designer in the 1990s, overseen by the Spitalfields Trust. They were then taken over by two television journalists who renovated the entire premises, retaining period features and gradually bringing the building back to its former glory, this time as a deli specialising in traditional British produce and fare, under the same name of A. Gold. The shop developed a cult following among locals and tourists alike and was widely revered as “a village shop in the heart of London”. It was the subject of a lengthy feature in “The Good Old Days” section of Jane Payton’s book, Fabulous Food Shops (2006) and was among The Independent’s 50 Best Food Shops in the UK.

A. Gold closed as a deli in recent years and has been rented out very successfully as an art gallery, and latterly as a series of pop-ups on Spitalfields Market.