A Home with a History: close encounters with the 18th century in Spitalfields House

In a double-fronted house in Spitalfields, overlooked by sparkling skyscrapers, lawyer Phillip Lucas has fulfilled his dream of recreating an 18th-century house in painstaking detail. Were it not for the radiators, you’d hardly know you weren’t jostling with the Georgians 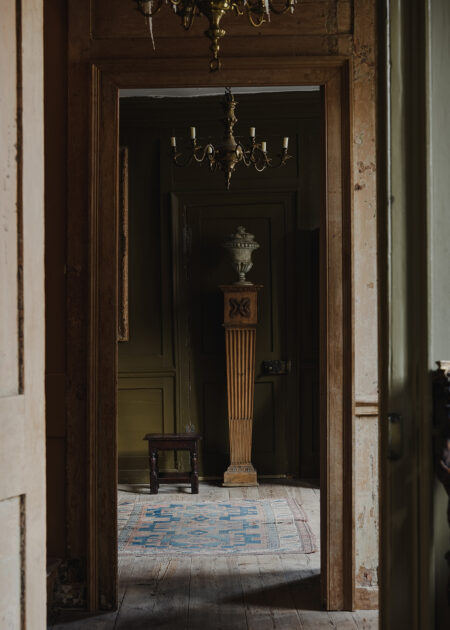 “I love drabs,” exclaims Phillip Lucas. He is standing in his house in east London, surrounded by glinting foxed mirrors and giltwood frames. Elsewhere, paintings of pink-pouted boys in scarlet frock coats vie for attention with burr-walnut bureaus and giltwood torchères. The heart stops as often as the eye does in this temple of beautiful, precious things, which makes this lawyer’s soft spot for sludgy colours a tad surprising, until you take in the setting. This former merchant’s house in Spitalfields has been restored – uncompromisingly, exactingly – to its 18th-century origins, drabs and all.

Phillip has spent a decade forensically restoring a building that, when he bought it, was barely recognisable as having anything worth saving. Now everything is, if not original to the house, then contemporary to it (save, of course, for the odd light switch and radiator. We can forgive him the odd mod con).

Was it love that got him here? Obsession? It was likely a bit of both, though it is Phillip’s determination and his deep understanding of the period that has made it possible. Without architects, he has somehow recreated an 18th-century house so perfectly one can almost hear the stairs creaking under the feet of former occupants. An incorrigible collector, he has amassed a wealth of coeval treasures along the way, so plentiful it has rather outgrown his home. Much will be going under the hammer at Dreweatts on 2 December; yet more is for sale on the website Phillip has launched with antique dealer Sam Wadham, straightforwardly called Spitalfields House. Showing Inigo around, he waxes lyrical about the joys and pitfalls, the challenges and romance of engineering this atavistic encounter with the past. “We all need a purpose,” he says. “And I think this is probably as good a purpose as any other.”

“This isn’t the first home I’ve had on this street. I used to live in another 18th-century house further down, which I’d spent five years restoring before getting bored, which wasn’t very popular with my partner! We moved out to Greenwich for about six months when an old neighbour contacted me to say that this house had come on the market and that I needed to buy it. I came to look at it the same day. It didn’t present well at all – it had been used as offices. There were photocopiers and water coolers everywhere and horrid olive carpet underfoot – the remnants of a business that was on its last legs. I couldn’t even view all the rooms because they’d lost two keys. But I made an offer straight away. The estate agent couldn’t believe it. He frog-marched me to their offices for fear I might run away before we formalised it.

“We moved in in March 2010 and immediately started pulling up the carpets. I was in court every day, then back here at night pulling up flooring in my suit, trying to find out if there were 18th-century boards beneath. It wasn’t entirely successful; there was a lot of plywood! But we did manage to salvage enough boards to redo two full rooms. It took two more years to source enough 18th-century pine boards to match.

“All of the panelling in here is original, apart from in the basement, which was originally split into two – a wet kitchen and a dry kitchen. That part of the house had apparently survived intact until about 1989, when a company moved in and ripped it all out. They dug down about three feet, removed all the flagstones, built a breezeblock partition, covered the walls in cement and installed a melamine kitchen, two fire safes, eight loos and six urinals. That was our kitchen for couple of years, as there was too much else to do in the house, but one Christmas Day I’d had enough. I came down with a sledgehammer and set to it, creating what can only be described as a mushroom cloud of dust. I wasn’t particularly popular that Christmas, though I did get the number of loos down to one.

“Most people, when they buy a building, are interested in paint colours, or where they’ll put their furniture. It wasn’t like that here. This house was a Gordian knot on epic proportions; we couldn’t broach one issue without tackling three or four others at the same time. We just had to dive in. I know people say you must have a plan, and I suppose if it had been an architect managing the project rather than a lawyer, we would have done. But the reality is that even when you do have a plan, you just can’t legislate for every eventuality. This goes against every bit of advice you’ll ever hear, but I believe that thinking about things too deeply can be paralysing.

“There were many unexpected moments in this project, but one particularly stands out. A neighbour told me that they’d noticed a bulge on the front of the house. A structural engineer came and found out that the only thing that was stopping the façade from falling on to the street was a piece of timber lining the shutters. We had to funnel all our resources into stopping that part of the house collapsing. You just can’t prepare for that sort of thing, especially in houses such as these, which truly have a mind of their own. At one point I thought it had something of a malign spirit. It was like it didn’t want to be restored. You’d light a fire in one room and another would start filling up with smoke. You’d fix one leak, repaint the ceiling and a week later one would spring from elsewhere. But after 10 years we’ve got there. I can finally start thinking about paint colours.

“Ever since I was 14 and visited the Royal Crescent in Bath on a school trip, I’ve wanted to recreate an 18th-century space. I’m quite obsessive about detail, but it comes from wanting to be honest. I’ve made sure to use 18th-century locks and drop handles on the doors, for instance, and salvaged Georgian crank hinges on cupboards. It’s important to me that what I do is right. I’m the same when it comes to furniture and paintings, mirrors and lighting. I’m trying to recreate something honestly and genuinely, otherwise it would jar. I’m a great accumulator of stuff and I love that when it all comes together in a particular space you can create something greater than the sum of its parts.

“This house is round the corner from Dennis Severs’; he was doing something similar a long time before I was, but the effect is very different. He wanted to create something theatrical, an 18th-century conversation piece. I want what I’m doing to be authentic, not theatrical, but I accept that my idea of what is authentically 18th-century is completely different to someone else’s. Nobody, in truth, really knows what furniture they would have had in these houses – though I admit it probably wasn’t a William Kent console. And so, when I say authentic, what I mean is that I don’t want anything in here that is pretending to be something else. I couldn’t put anything reproduction in here, save for perhaps a missing bit of moulding.

“I’m not trying to impart my personality on these rooms. I’m trying to get them back to how they would have been as best I can. It takes time, though – it took us longer to rebuild two chimney stacks than it took for a whole skyscraper to go up behind the house. But it’s worth it, for the feeling you get being here. When I moved into my first house on this street, I moved in with nothing more than a card table and a chamber stick. I’ve never forgotten that evening, walking up the dog-leg staircase through flickering shadows. It was never better than that magical moment. That’s the feeling I’m trying to create.”

Property from the Phillip Lucas Collection, Spitalfields House will be auctioned on 2 December at Dreweatts