Five Good Things: what to do, watch, buy and book this December

From films and fabrics to talks and treasures, we’ve rounded up diversions and delights to see you through December 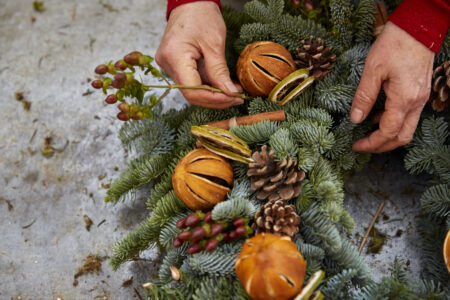 Fringed capes paired with finger-wave up-dos, maids in caps, men in cardigans or cummerbunds – Mothering Sunday is almost worth watching for the costumes alone. And the wallpaper too, for that matter, if – like us – that’s really your thing. The film, commended for its bewitching beauty, has been adapted from Graham Swift’s devastating 2016 novella of the same name. Set on the last Sunday in March 1924, it tells the story of two class-crossed lovers – Jane, an orphaned housemaid, and Paul Sheringham, son of a grand local family whose brothers all died in the First World War, and who is engaged to be married to a girl from his own social circle. No spoilers, but you might not be surprised to learn that the affair is somewhat doomed. Though some reviews deemed the plot a little languorous, it is also profound in its intimacy, intensity and impact – thanks in part to the starry cast (Olivia Colman, Colin Firth, Josh O’Connor), who bring extra heft to this portrait of love, loss and the shattering legacy of war. If you haven’t yet managed to catch it in a cinema yet – hurry.

From the sublime to the, well, sublime. Linwood’s new ‘English Garden’ range of prettily printed linens, which we’ve been lusting after since it first crossed our desk during Design Week, takes inspiration from all the gorgeous greenery we’re rather missing at this time of year, from riotous summer roses to the sylvan frill of verdant oak leaves. Style-wise, there are frothy chintzes of vintage loveliness, beautiful block-print-inspired blooms and an ancient Tree of Life motif reimagined in kaleidoscopic hues. Granny chic, cottagecore – call it what you will – it’s jolly nice indeed. All designs cost £64.90 per metre. Visit Linwood for details.

Wake up and smell the cinnamon: we’re edging into that most wonderful time of year. And where better to start the hall-decking than at your own front door? While of course you could buy a wreath, those of a craftier inclination might like to consider making their own. Petersham Nurseries, which made its name as the most glamorous garden centre in the country, is hosting four courses across the month, where those nimble and green of finger can learn about foraging for your materials – less tinsel, more teasels – before creating a festive decoration to take home. Visit Petersham Nurseries for more details.

In the late 17th century, hordes of Huguenot communities began to flee across France’s borders, in flight from religious persecution. Joining other communities in exile, 200,000 refugees spread themselves across the world, from Britain to North America, South Africa to Brazil. This vast diaspora – and in particular the many hundreds of highly skilled artists and craftsmen among them who would dominate the luxury trade for generations to come – are the subject of a new book by Tessa Murdoch, Europe Divided, which is firmly on Inigo’s Christmas list (devoted readers of the Almanac will know that we’re fond of a bit of Huguenot history). Even more excitingly, the V&A – which has published the book – is hosting a talk on the subject on 13 December, with Tessa Murdoch in conversation with Dominic Grieve, President of the Franco-British Society and Richard, Duke of Buccleuch, whose ancestors patronised successive generations of Huguenot artists, craftsmen and designers. Visit the V&A’s website for more details.

This month Sworders, the auctioneers, is hosting not one but two interiors sales. The first, one of their fortnightly Homes & Interiors events, takes place online on 7 December. Expect an abundance of attractive things, from Sunderland lustreware jugs to ravishing rugs – made all the more appealing by their tempting estimates. There’s surely a Christmas present or two to be found here (even if it’s for yourself). Then, on 14-15 December in the Essex branch comes the two-day Fine Interiors sale, featuring a covetable cache of curios, artworks and furniture. Our top lot? A pair of Indian carved wooden papier-mâché chairs shaped like tigers – wild stuff. Visit Sworders for details.