Rush Matters practices a rare pursuit, weaving freshwater bulrushes to create some of the most sought-after flooring in the world. As well as being passionate about preserving the process, founder Felicity Irons is also ardently adapting it in every wonderful way she can 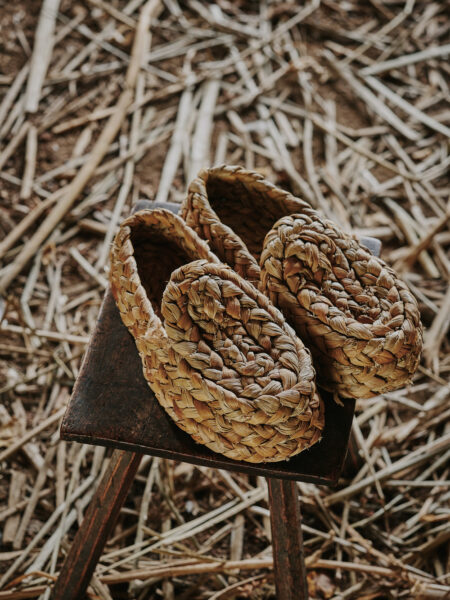 Felicity Irons is one of the few rush weavers left in Europe, a custodian of a craft that traces its roots in Britain back to the Anglo-Saxons. However, while the method is ancient, it’s far from dying – evidenced by the hustle and bustle of her workshop in Bedfordshire, a 14th-century barn that has been the headquarters of her company, Rush Matters, for the past 18 years. Entering this long, low-ceilinged space, you are hit by both a flurry of activity and by the sweet, post-summer smells of dried grasses. Across two rooms, a small group of men and women weave, their soundtrack the gentle swish-swish-swishing of rushes being plaited together for various projects: placemats, rugs, baskets. Rushes are leaned against walls and stacked on surfaces, all harvested from local rivers and dried here on-site over sunnier months.

Rush Matters might be a thriving enterprise today – albeit a local one – but it started as a one-woman show. Having been born in Sydney, Australia, Felicity’s family moved back to their native Bedfordshire in 1977. At first, Felicity had dreams of being an actress, but after suffering serious injuries in a car accident, plans changed. “I lost all my confidence,” she says. “I didn’t feel I was going to be good enough to act.” Convalescing at home with her antique dealer mother, she got “really bored” and one day picked up a book on caning and rush seating. “There were always chairs hanging around that needed working on, so I undid one and redid it three or four times until I thought it was good enough for someone to pay money for it. Thirty years later, here I am!”

Since founding Rush Matters in 1992, Felicity’s gone far beyond chairs. She’s installed flooring in celebrity homes, collaborated with some of the biggest names in fashion and design (Tom Dixon, Faye Toogood, Jasper Conran, Ralph Lauren), and worked in film and television, perhaps most notably on Game of Thrones. “Diana Rigg’s character died on our matting!” she exclaims, proudly. Over a cup of tea in the workshop with Inigo, Felicity enthused on her passion for keeping weaving alive, and told us how the projects she chooses help her to continually reinvent this ancient art form for modern times.

“It was 1994 and I’d just paid off my first business loans when Tom, who I bought my rush from, sadly died. When I found out, I went to meet his brother in Cambridgeshire and asked what was going to happen to their business, as the family had been cutting rush there since the 1700s. Neither Tom nor his brothers had children, so it was just going to disappear. Romantically (and practically!) I didn’t want to see that happen. Tom’s brother took me out for two hours on the punt, showed me how to cut the rush, then dropped me back on the bank. I was cautious, but I bought the business to save it.

“We cut from the end of June to the beginning of July for about four or five weeks, and we don’t return to the same area for two to three years after to allow the area to recover, a bit like letting a crop field lie fallow. We harvest on the River Nene in Northamptonshire, along the length of the River Great Ouse, and we’ve been out as far as Smithey Fen in Cambridgeshire. While it’s all the same plant, it grows differently depending on the location. The stuff on the Nene, for example, is generally quite thick and tall, whereas at Oakley Bridges in Bedfordshire it’s more delicate and fine. Different textures are good for different jobs – really fat, coarse rushes make great log baskets, but finer bolts are good for table mats. I once made a very special chair in collaboration with Christopher Jenner, using minutely fine rush. The weaving took me around 200 hours.

“Four of us can cut two tonnes of rush a day by hand using 3ft scythe blades mounted on poles. We now have four rush-cutting punts. Tom used to have two beautiful pitch-pine wooden punts that he made himself, but over the years they deteriorated, so I now have aluminium ones. They don’t go through the water quite so beautifully. Once it’s harvested, if the weather is fine we’ll stand the rush along a hedge to let it dry out thoroughly, turning it every day, otherwise it will rot. After that, we store it in the barn. When we want to work with the rush again, we simply wet it again to make it malleable.

“I think what keeps me interested in rush weaving are the endless possibilities with the material. It’s lovely to work with in so many different ways. The thing with plaiting is that it hasn’t changed for centuries and centuries – we simply put it in new contexts. We get to be innovative with it, if you will. What’s exciting is that Rush Matters is now recognised for our craft, and we’re entrusted with wonderful projects because of that. One of our most memorable jobs was at Château d’Azay-le-Rideau in the Loire Valley, where we hung rush matting on walls, like wallpaper. It’s a historic type of decorating in France. It was momentous for both us and the curator, as she had wanted to do it for 20 years but hadn’t found anyone to do it in France. We had never worked on scaffolds before and had to make everything in the UK before shipping it over, but once it was done it was a thrill to know we had reinstated something that hadn’t been seen there in more than 500 years.

“The strangest request I’ve ever had is to make a suit of armour out of rush for a movie – although I can’t tell you which one as they’re filming right now! It took us such a long time as we didn’t have patterns or measurements, we only had references of historic Micronesian armour made from grasses. Then I had to cut holes in it to make it look like it had been damaged in battle, which was mortifying after all that work. But it was such a cool project.

“There are always things I’d love to do, such as handbags or lighting, but there’s never time as we’re so busy – which, admittedly, is a lovely problem to have. I love teaching and run workshops here. Everyone has to make a table mat to start with; from there they can then learn different techniques to make whatever they want to. Some people come from an art perspective, wanting to learn different plaits so they can go off and play, but others want to make something specific – a set of tablemats, a hat, a bag. One student came to my class to make a pair of slippers for his partner. He made one shoe at the first class then had to come back later in the year to my next workshop to make the other!”