A Private View: a window to the world of “the Willesden Wonder”, Peter Twining

Dubbed as such by his fellow dealer Christopher Gibbs (despite living in Brondesbury…), the late Peter Twining, a superstar of the London antiques scene, was well-known for his extraordinary eye – something he brought to bear on the mid-century apartment he exhaustively overhauled. With the flat now on the market, his friend Christopher Hodsoll looks back on Peter’s remarkable life – and living quarters 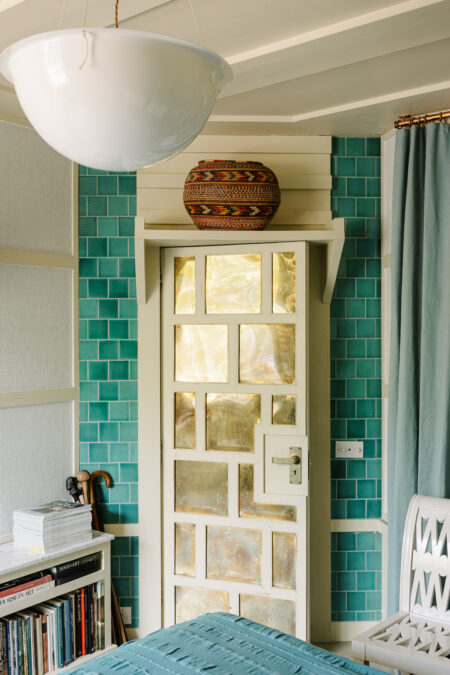 Seen from the street, the curtained windows of Tarranbrae, a neat Art Deco mansion block on Willesden Lane built by Adie, Button & Partners in 1938, are of a piece. Bar just one set, that is. In one of the middling floors, towards the left-hand side, hefty slatted shutters – clearly bespoke – line the inside of the glass. They would be quite unremarkable, despite their slight idiosyncrasy, were they not indicative of something magical within.

“Imagine!” says Christopher Hodsoll, now inside the shuttered room. “When he bought this place, it looked like every other in the block.” Christopher is talking about his friend and the apartment’s owner, the late and very great antique dealer Peter Twining, who left the flat Christopher (and his wife, Sarah, as a thank you for the hundreds of Saturday breakfasts she made him) when he died earlier this year. Looking round, it is in fact quite hard to imagine. For every wall, door and window has been dressed in handmade joinery, painted warm cream. There are custom-made walk-in wardrobes – designed solely for the serried spines of The World of Interiors and FMR magazines – entered through pointed arches. The doors are covered with a Mondrian muddle of mirrors, with echoes of Chippendale, while the walls are lined in tiles of teal, mottled blue and sand. In the bedroom, timber has been transformed into Renaissance rusticated stonework, a handsome headboard more at home in the Palazzo Medici than this pocket of Mapesbury.

Such aesthetic ambition was typical of Twining, a decorator, designer and dealer who made his name in the 1960s heyday of the King’s Road antiques world. Peter was known – at least to Christopher Gibbs, another star of that scene – as “the Willesden Wonder”, thanks almost entirely to the creation of these daring if diminutive digs. (We’ll forgive the slight geographical slip-up.)

Talking to Hodsoll, one of Peter’s great friends and his former protégé, it’s clear what a wonder he truly was. Having reluctantly read law at Oxford to please his father, Peter (a student of history in his spare time) approached antiques with an uncommon scholarliness – at times, Christopher recalls fondly, to the detriment of his turnover. Caring not a fig for fashions, Peter bought things “because he knew they were good”, even if it sometimes meant it took time to shift them. “It was often a case of waiting for other people to realise their value.” They invariably did.

“Clever,” says Christopher when asked to distill his mentor in a word. “I don’t just mean bookish – though my goodness! The books he had here were incredible; you could barely walk through the rooms here for tripping over them,” he continues. “No, Peter was a connoisseur. He was a virtuoso.” He bought more bravely than many of his contemporaries and, as a consequence, his shops – first in Chelsea, then in the 1970s on Ledbury Road, where the young Christopher joined him as an apprentice – became legendary for the quality and singularity of the stock. “He was also an impossible boss and completely uncommercial,” Christopher laughs, remembering the terrified look on one customer’s face as Peter, tripping over a table kept precariously on a stair landing, came tumbling down the treads trumpeting expletives. “But it didn’t really matter,” he says blithely. “He was so very good at what he did.”

So good, indeed, that until his later years, long after his shop had closed, Peter continued to run the antiques department of Soane Britain, the Pimlico Road stalwart co-founded by Hodsoll with Lulu Lytle in 1997. When antiques went out of fashion Peter was given a new lease of life by Lytle, assisting on new designs and interiors and providing very good company. “His eye for detail and scale was perfection,” Christopher continues, remembering in particular some Indian chairs of carved ivory, placed to stand sentinel either side of an exuberant houseplant in his bedroom. “In theory, they should have felt out of place here. And yet…”

In fact, the same thing could be said of almost every corner of this arresting Aladdin’s cave of an apartment: the shelves of jumbled brass loti (Hindu holy-water pots); the custom-made curtain poles resembling plumbers’ pipes; the profusion of vibrant turquoise, the same colour as his copper-oxide urns. Perhaps the only things in the flat that speak to its original fabric are a series of white box lights, made to an almost brutalist design of Peter’s imagination. Yet even they reflect his brilliant offbeat-ness, their glazed white surface not ceramic, as one might guess, but heavy cast iron.

Christopher’s affection for this flat, though of course he’s never lived here, is palpable. For it is a reflection not only of his great friend, but of a dealer “of a breed no longer seen these days”. One hopes, he says, that the apartment’s merit lies not just in its architecture or its location, but in its very particular provenance and in its having the same quirks and delights of its onetime owner, the likes of whom shan’t be seen again. Oh, wonder indeed.