A Place Like No Other: Charleston Farmhouse, East Sussex

The dazzlingly decorated hideaway of the Bloomsbury Group remains a place of inspiration and escapism for anyone bored by the status quo. 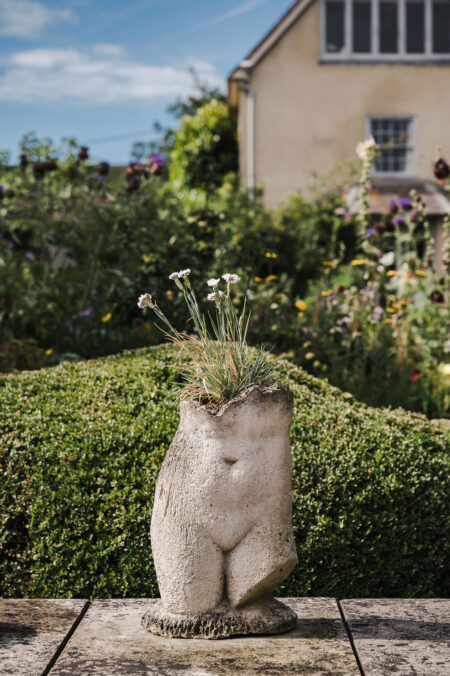 Charleston is something of a hidden treasure – positioned just off the A27 in a fold of East Sussex, the house is tucked behind an excess of foliage and lush trees, its weathered tiles rising among narcissus and dahlias. Reaching it feels like encountering an old friend at a party, or, perhaps, making a new one –  whether you’re a frequent visitor or just discovering it for the first time, you instantly feel welcome.

Of course, this should come as no surprise: for much of the early 20th century, Charleston served as a place of escape and conviviality for a revolving cast of effervescent artists, writers and intellectuals, from famed members of the Bloomsbury Group such as Virginia Woolf and E.M. Forster to associated figures including T.S. Eliot, the economist John Maynard Keynes and the composer Benjamin Britten. Though it served as a permanent home for its artist owners Vanessa Bell and Duncan Grant from the outbreak of World War II until their respective deaths, its beauty is the result of collective creativity, filled as it is with artworks, murals and mementos that reflect an astounding group of friends and lovers, coming together to write their own shared history.

“Barely a surface is left undecorated.”

Architecturally, Charleston is a rather ordinary Sussex farmhouse, built in the 17th century and Georgianised in the 18th. But its interiors constitute a living work of art, which began  in 1916, when Vanessa Bell and Duncan Grant first arrived, and never really stopped as long as they lived. In its whimsically furnished rooms, door frames and fireplaces burst with colourful frescos of dancing figures and blooming flowers, seemingly executed on the spur-of-the-moment. Walls are crammed with paintings and hand-stencilled with vibrant patterns. Barely a surface is left undecorated, from cupboards to bedframes to the sides of the only bath, which was still being beautified with painted panels (by Grant’s friend Richard Shone) as late as 1969.

Much of the artwork in the house is, naturally, by Bell and Grant themselves, but there is plenty of evidence of the influence of their friends and family. The red lacquer chairs in the dining room, as well as the unusual fireplace, are designed by the writer and critic Roger Fry, Vanessa Bell’s lover and a co-founder, with Bell and Grant, of the Bloomsbury Group’s furniture and design business  Omega Workshops. In the studio (also designed by Roger Fry) there’s a bust of Virginia Woolf by the sculptor Stephen Tomlin. Throughout, the layers of history and occupation coincide.

“Charleston is testimony to an ideology as well as an aesthetic.”

Key to Bell and Grant’s decorative philosophy was a feeling of spontaneity and impermanence, which can still be felt in the house’s glorious mishmash of antique and 20th-century furniture and chalky, half-dissolved wall-paintings. It’s an approach wonderfully described in the autobiography of writer David Garnett, who was Grant’s lover during the early days of Charleston. “One after another the rooms were decorated and altered almost out of recognition,” he wrote, “as the bodies of the saved are said to be glorified after the resurrection.”

But though Charleston is a beautiful home, it is also more than that – a testimony to an ideology as well as an aesthetic.  Duncan Grant was drawn there in the first place because of his status as a conscientious objector during World War I, which granted him military exemption so long as he pursued agricultural work. Vanessa Bell, in moving with him, was leaving behind a marriage, to Clive Bell, that had become entirely platonic, and pursuing something far less conventional instead – a long-living and working relationship with a man who entertained a string of homosexual lovers, but also gave her a child, Angelica.  Attempting to draw a detailed map of all the intertwining liaisons that Charleston played host to over the years is, let’s be honest, no easy task: Roger Fry was also a former lover of Bell’s; Grant’s lover David Garnett, who was present at Angelica’s birth, also went on to marry her; Bell’s former husband, Clive, remained close and came to live at Charleston in 1939. But what becomes clear the more you look at the entire picture is that Charleston, for all its guests and residents, was a place of counter-cultural escape, a haven away from the concerns (and morals) of London life, that allowed them to do things their own way.

“Recently, the house has received another boost to its fortunes.”

At the beginning of 2020 Charleston was on our horizons for its survival struggle. Since the 1980s, it has been run by a non-profit trust, and was in desperate need of £160,000 to fund its continual upkeep. Thankfully, public generosity prevailed and the sum was donated via a crowd-funding campaign. But recently the house has received another boost to its fortunes, in the form of a set of previously undiscovered drawings by Duncan Grant, donated by the theatre set designer Norman Coates. The collection contains a series of loose and explicit scenes (over 400 in number, largely of male-on-male sexual encounters) that were given by Grant to his artist friend Edward le Bas on May 2, 1959.  Though it was long assumed that the pictures had been destroyed by Le Bas’s relatives upon his death in 1966, they were in fact passed down, in secret, by a series of friends, eventually landing in Coates’ hands via his partner, the picture framer and Bloomsbury member Mattie Rades. For the past 11 years, Coates had kept these private treasures under his bed, pulling them out occasionally to surprise and shock his guests. But he started a conversation with Charleston Trust in the hopes of finally sharing these artworks – which have been valued at £2m – with the wider public.

Thanks to this and the successful funding campaign, the house is now slated to reopen for visitors in spring 2021, but, while Covid-19 restrictions continue, it is also mounting free digital events, the latest of which, Outing the Past (on Feb 7), will take a look at the recently acquired portfolio of pictures, and the story behind them. These displays add just one more compelling reason to pay a visit to spectacular Charleston, which, for the past 100 years, has been able to transport so many visitors into a world where everything is beautiful and anything is possible – the perfect antidote to modern life.