A Lesson in Craft: the topsy-turvy collages of artist Mark Lazenby

Inigo speaks with the London-based designer, and cut-and-paste virtuoso, about how paper has become his playground. 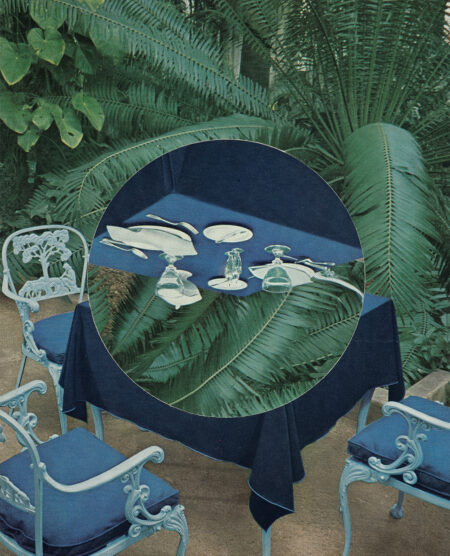 It’s not often that one sees a plane bursting through a fireplace, blocks of cheese floating up above the ordered pews of a church, or a giant piece of hard candy abandoned on a beach, but in the strange, dream-like scenes that artist Mark Lazenby fashions within his collages, almost anything appears possible.

This surreal quality, of course, is part of the nature of collage: it’s a medium which allows the artist to assemble random, and sometimes incongruous elements to form a new whole. The term stems from the French “coller”, meaning to glue or stick together, and can be traced back as early as 200 BC, but the medium gained major traction during the 20th century when it was picked up by the likes of artists Georges Braque and Pablo Picasso, who would use mixed scraps of paper to form jumbled still lives depicting fruit, instruments and household ornaments.

Mark’s own artwork offers a fresh take on this practice, creating strange juxtapositions of the beautiful and the banal through the manipulation of vintage lifestyle and interiors magazines. It’s a method he’s been developing all his life, from early experiments as a teenager at school to his enrolment on what his mother jokingly referred to as “a masters in cutting and sticking” at the Royal College of Art. Mark is now a full-time artist and has also been art director of the revered design magazine The World of Interiors since 2004, two occupations which he says “work hand in hand”. Below he talks more about his beginnings with collaging and the process behind his recent Turned Room series, which sees him cut-up and flip photographs of striking domestic spaces – in turn, Mark not only reimagines these rooms of the past, but overturns our visual understanding of the home.

“Reality has changed and shifted.”

“The ‘Turned Room’ series came out of my exploration of how the world has totally been turned on its head, especially over the last year, and how everything we know has changed and looks so different. Even the confines of our own homes don’t look or feel the same. Reality has changed and shifted but often we don’t see what is right in front of us.

“The series has also come out of the use of circles in my work. For the last five or more years I have been working in many different shape formats; I think it is weird that people mainly work within the confines of a rectangle.

“I feel very blessed to have had a studio space to work in, especially during the pandemic. This is where most of my work is physically made, but most of my ideas form while I am out walking or am sat in prayer. I also find it useful to allow pieces to develop over a period of days or weeks, especially for my larger works, allowing time to change them rather than ploughing on headfirst for ten hours a day.”

“I am always open to giving any form of paper a home.”

“Sometimes I have a very clear vision of what I want to make right from the start, whereas other pieces I just allow the elements to spontaneously build and see where it goes. A little like how Paul Klee took his ‘line for a walk’, my compositions grow, and I’ll do battle with them, tame them until I am happy. I love the element of surprise or mistakes in a piece too…

“I am very particular about the feel and quality of all the paper and elements that I use. I also love the juxtaposition of bringing together a sheet of paper that is 200 years old with something more recent, merging these unconnected things – it just has a certain magic to it for me. I think having this slightly disparate style keeps me on my toes and keeps me pushing forward. I don’t just want to keep creating the same piece over and over again.

“I have a large collection of old printed matter from the 1940s, 50s and 60s which is always being cut up, so I am always on the lookout in markets, antique shops and book shops as well as online.

“People will quite often just turn up with random things for me that they have found or no longer have space for; for example a few years ago I had a message from someone on Twitter saying they had four boxes full of women’s magazines from the 60s and 70s – they proceeded to bring a box every day on the back of their moped for me, and these have been a really valuable resource. I am always open to giving any form of paper a home.”

“I am fascinated with how collecting and collections affect the space you live in.”

“Apparently from when I first learnt to walk, I would carry a bag around with me putting all my favourite things in it. As I grew older, I collected loads of things from key rings and smurfs, to beer mats and postcards. I believe that my collecting habits then evolved into part of my investigation of collage – I am fascinated with how collecting and collections affect the space you live in and then how it effects your work and life.

“I always drew a lot as a child but would often get frustrated with the outcome – I always knew I wanted to be work within the creative world but didn’t know what or how. When I studied graphic design to start with at school, it was all still handmade so every word would have been cut out of photocopies of Letraset pages or drawn; I just had a natural affinity to it and a connection started there.

“Making collage is just something I have to do to be me.”