A Home with a History: a Georgian townhouse in a different mould

The tall townhouse Peter Malone and his wife, Helen, share in Bath is far from ordinary, filled as it is with a jaw-dropping miscellany of plaster pieces (to say nothing of the Howard Hodgkin artworks and Ottoman tiles). Taking in the couple’s gypsum-laden walls, the pair talk to Inigo about a life shared with a cast of thousands 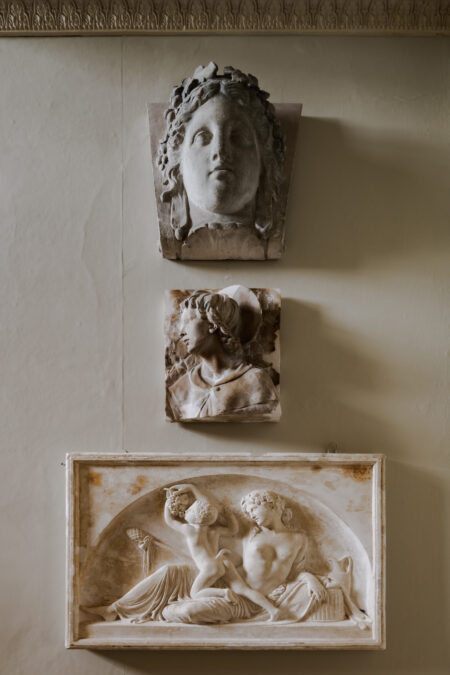 Peter Malone is waxing lyrical in front of a sea of faces. They’ve all got their eyes closed. Tough crowd? Not quite. They form part of the illustrator’s vast collection of plaster casts – these are the death masks. “And life masks!” Peter laughs. “I don’t want to seem too pessimistic.”

The distinction is important. If not squeamish, Peter is certainly sensitive to the idea of death masks and balks at the idea of buying an original of someone he doesn’t know. “I’d be intruding on something very personal,” he says, solemnly. A reproduction, however, is fine, which is why the majority of those in his collection are of notable people: poets, writers, philosophers.

But the distinction is also important because Peter is a details man. One look at his work – meticulous horticultural and architectural portraits of people’s homes, for instance, and exacting book illustrations – proves the case. His wife, Helen, a picture restorer with a punctilious hand, who has worked for major institutions across the country, is similarly interested in the finer characteristics of things. It was through Helen that Peter met Howard Hodgkin, for whom he worked between 1987 and 1993; Hodgkin’s splashy works, in sultry shades of turmeric and treetops, now hang in almost every room of their lofty house on the slanting Northampton Street, in the northern reaches of the city. The late, great painter’s influence lives on in the couple’s spectacular array of Ottoman tiles too, a love they all shared.

Designed by John Pinch the Elder, Peter and Helen’s house forms part of a development finished in c1800, the earliest known work by this key architect of Bath. The road was bombed badly in the Bath Blitz of April 1942, though mercifully one side survived. “I think they must have been aiming for the Royal Crescent down the road,” Peter says. “It was a moonlit night, so they did manage to get quite close.” The blasts destroyed many of the windows on the street, though Peter and Helen’s place still has “the odd original pane”. This is the kind of historical jewel – like the stone stairs’ bowed treads, hollowed by hundreds of hobnailed boots – that Peter rightly delights in sharing.

As well as an appreciation of the smaller things, both Peter and Helen are blessed with an eye for the outstanding: auction-house furniture, exquisite Islamic ceramics, and, not least, the scores of plaster mouldings that Peter has collected over the years, of which he’s something of a scholar. Point to any of the hundreds dotting the walls and he’ll tell you a story.

In fact, the same can be said of his and Helen’s house and the beautiful things with which they’ve filled it. Both halves of this couple are easily provoked into anecdote – just ask them who painted that picture, why that thing looks the way it does – and they’ll regale you with a tale of the unexpected. Both are immensely knowledgeable about the things they love. One gets the sense that this is a direct result of a long and fulfilling relationship with their home, one they’ve decorated with purpose and thought. Looking round, it’s clear that in this house, they’ve broken the mould – for here, familiarity breeds not contempt, but endless curiosity.

Helen: “In the 1990s, we were living in Hackney with our two small daughters and it was pretty grim. A family had moved from our street to Bath and, when they went away for Easter, they invited us to stay in their new house. We all came down here for the weekend;  I spent my time with a friend while, unbeknownst to me, Peter was looking in estate agents’ windows. He came back one evening and said: ‘I’ve seen the one I want.’

Peter: “Ha! Oh dear… I remember our younger daughter being very disappointed not to find that the Circus was just a load of old buildings – no clowns or trapeze artists.

“The funny thing was that I recognised the house from an article in Country Life. It had been featured in around 1980, I think, in a piece lamenting the appalling conditions of this row of houses. People had breezeblocked up the windows and the buildings were practically falling apart. Admittedly, I knew Bath quite well, having lived here in the 1970s after art school, but I still recognised the place from that old article.

“One always thinks of these houses as having been lived in by grand people in the past, but across the centuries they’ve been home to all sorts: nurses, seamstresses, maids. The archives mention lots of ‘chairwomen’ living here at one point. We don’t quite know what they did; I’ve got a theory that they pushed punters around in bathchairs when they came to take the healing waters here.”

Helen: “The house was just lovely when we bought it. The previous owner had done it really well – there was great furniture, lots of Piranesi prints on the walls…”

Peter: “…And then when we actually got in, it all looked rather gaunt. All the nice things had been taken out. On our first night we sat here, without enough furniture and eating a takeaway, and we just thought: ‘What have we got ourselves into!’”

Helen: “Filling this place was a real effort, but we’ve done it over the last 20 years – to the point that the idea of unfilling it, when we eventually move, fills me with dread. But we didn’t do anything for quite a while, not least because I’m considered about what I buy. It has to be right. Of course, sometimes you make mistakes, but it’s only more likely when you rush things. You need to live somewhere before you know what you need or want. The last thing I wanted was an interior decorator. Peter calls them interior desecrators…”

Peter: “I got that from Peter Hone, the master of plaster – ditto lots of my casts, in fact.

“I’m interested in the logistics of interiors. In making things work. You have to live with your choices so one wants them to be right.”

Helen: “Exactly. So we just did things slowly. Bought things as we saw them. We changed the room colours a bit and redid the kitchen, as there was nothing there. Peter, who’s brilliant, designed the dresser and the cupboards, but that’s it really.”

Helen: “It’s laughable, really, when you look round this ancient house and see how we’ve filled it with old things, but Peter and I both secretly dream of living in a modern house. It would be brilliant! Glass walls… Less stuff…”

Helen: “But not no stuff. I couldn’t go the whole hog. I’d have to have some old things in there. And it would have to be a really special piece of architecture. Like this one, really, just in a different way.”

Peter: “There’d have to be space for some plaster casts too, I think…

“I’ve been amassing them for 40 years. I still have my first – of the goddess Diana – hanging in the kitchen. I think she cost me about three quid. My collecting just took off from there. Quite a few came from the British Museum workshops in Hackney, though I’m also in touch with lots of specialists and dealers – there’s a good network of us. I’ve made some too – the leaves in the hall, for instance – while Helen cast my face, which was quite a fraught experience. It all got stuck in my hair. There was quite a lot of blood in the end – not so good with white plaster.”

Helen: “That was frightening. Horrible, really! The fish in the kitchen has quite a good story too. My daughter made it for her art A-level. Peter bought a gurnard from a fishmonger who warned us that it was somewhat past its prime. It was pretty ropey by the time we’d finished casting…”

Peter: “I don’t think I could choose a favourite from my casts. There are just too many. It’s funny – I always look at other people’s kitchens and think: ‘You call this a kitchen? It hasn’t got any plaster in it!’ But I suppose people come here and think the opposite, that I should stop buying them. The only problem is, I can’t.”