A Home with a History: going Dutch – Frank Hollmeyer on sharing space with his favoured Flemish masterpieces

The collector has filled his Georgian townhouse in Kennington with exquisite examples of the Northern Renaissance paintings he’s so passionate about. But, as we learn, it’s no ivory tower. “These beautiful things deserve to be enjoyed,” says Frank. “To be lived among. To be loved” 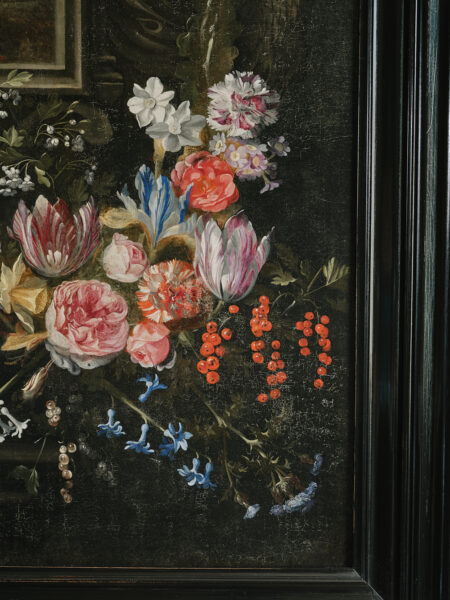 Frank Hollmeyer is a renaissance man in more ways than one. A trained art historian born in Germany and raised in the Netherlands, he speaks four languages and studied all over Europe before settling in London, working first in finance and now as a headhunter. He also has something of a penchant for Dutch old masters.

Frank goes into raptures when talking about paintings. One gets the sense it was always thus. As a teenager, he compromised with his business-minded father and agreed to study economics, only so long as he could do art history on the side. It led him to Heidelberg, Germany’s oldest university, and a degree that gave him a good grounding in both finance and the Florentine art world. But the Italian focus of his studies left him cold. “Too fleshy,” he says. “Too flashy. It just doesn’t do it for me.”

The 17th-century Dutch paintings he encountered, however, heralded the start of an enduring love affair. “I found the world they were depicting utterly fascinating,” he says. “A new society was being created in the Netherlands at the time, where the tastemakers were not the aristocrats or the Church, but the middle classes.” Frank’s eyes widen. “Nothing like this had ever happened before.” Years later, after further studies in Aix-en-Provence and Paris, Frank, finding himself with a bit of money, bought his first picture, a Breughel. It was a punchy start – and he has continued in the same vein since. Now the paintings – many of them significant, all of them beautiful – live, along with an impressive array of important plaster casts, in Frank’s tall Georgian townhouse in Kennington, south London. It’s hardly hugger-mugger here, but the rooms flirt with fullness. “Sometimes I’m forced to sell bits,” he says. “No bad thing, I suppose.”

The house itself took some reworking to transform it from a semi-modernised family home to the urbane gentleman’s lodgings it is today, fit for any Dutch merchant. It was “a true labour of love” that saw Frank camping on the top floor for a year before he made any major decisions. That he took such pains suggests a head-over-heart man but, Frank insists, the opposite is true. “It was always about things feeling right,” he maintains. It’s the same with the paintings: “It’s pure romance,” he sighs. Romance combined with refinement, we’d add – and not without erudition. That said, Frank has the true enthusiast’s gift for wearing his learning lightly. Ever agile, his conversation can turn on a coin, leaping from pilaster to post-impressionism, and always enthusiastic and witty. Yes, his head may be fit to bursting, but it’s clear that so too is his heart.

“When I bought my first painting, 17th-century Dutch painting wasn’t very fashionable. Not many people were buying it – now, even fewer are. Tastes are shifting and it simply doesn’t have the accessible reference points for people, it doesn’t speak to them. But, actually, the fact that it’s not global holds a charm for me. I know that the pictures I’m buying may well lose their value, but that’s not why I want them. For me, it’s not about making an investment.

“I quickly realised I’d caught the bug. I didn’t want to just accumulate, though. With each painting I was buying, I was becoming better versed in quality, provenance and those sorts of things. As the collection grew my tastes refined and it made sense for me to sell some of the earlier purchases. A collection shouldn’t be static because, as a collector, you’re always learning. It’s dynamic. But it also has boundaries that you need to respect – financial boundaries, yes, but space boundaries too. I want my pictures to hang somewhere that celebrates them. It needs to be right.

“At the time of my first picture, I was living in Islington. It was a lovely Regency house, but the paintings didn’t sit well in the architecture. I wanted somewhere with a bit more wall space, which I couldn’t have afforded in that part of London. A friend mentioned Kennington; I admit, I was snooty about the idea of living somewhere so urban – but then I saw this house.

“We wandered around the area together and came across this beautiful garden square. None of the houses were on the market, though. A few weeks later I found myself there again on a Sunday evening. As I strolled past this house, I saw a young man walk out and put a homemade ‘For Sale’ sign up before dashing back inside. It turns out it was his parents’ house. He wanted to become an estate agent so his father gave him the chance to sell their place. I rang them the next day and made an offer on the Tuesday. I promised to be quick as long as they promised to take it off the market. Three weeks later it was mine! I think I was the only viewer.

“I had rather a big job on my hands, though, as over the years the period features of the house had somewhat fallen away. The square was built for the doctors working in Bedlam, the lunatic asylum that would become the Imperial War Museum, but by the late 19th century things had gone rather downhill. It was a slum. A century later and it was owned by the council, after a compulsive purchase order in the 1930s. It was pretty grim, I think. The houses have been divided up, knocked through, fiddled around with – and rarely given the maintenance they really need. The family I bought from had modernised things in the 28 years they’d been here, but I wanted a period house.

“I didn’t touch anything for a year after I moved in. I lived on the top floor with an electric hotplate that I used to boil water for spaghetti and coffee. That was how I lived, while I worked out how I wanted this house to look. I needed to feel the flow of the house – where I was going to sit, where the sun came in, where I wanted to read. I’m so glad I did that – at one point I was going to put the kitchen upstairs instead of in the basement. That wouldn’t have worked at all.

“My Islington house was very noughties in its decoration – all Gustavian furniture and pale oak flooring. This house needed a different look. The colours here are very different, much richer. I asked my great friend Tim Whittaker, who used to run the Spitalfields Trust, to help with some of the more architectural details. He knows everything there is to know about 18th-century joinery and moulding – he’s worked on virtually every house in Spitalfields, I’d say! But we had to be respectful, because this just isn’t a Spitalfields house from 1730, it’s a south London house from 1792. Things were different by then – much simpler.

“I take a lot of photos of this place for my Instagram account, @slightlyworn. The name’s a bit of a joke, but it plays into the idea that I want this house to be liveable. My mates always take the piss, asking if they can sit on this chair or touch that object, but they just do it to wind me up. It’s not a museum. I would never want to live like that. These beautiful things deserve to be enjoyed, to be lived among, to be loved.”