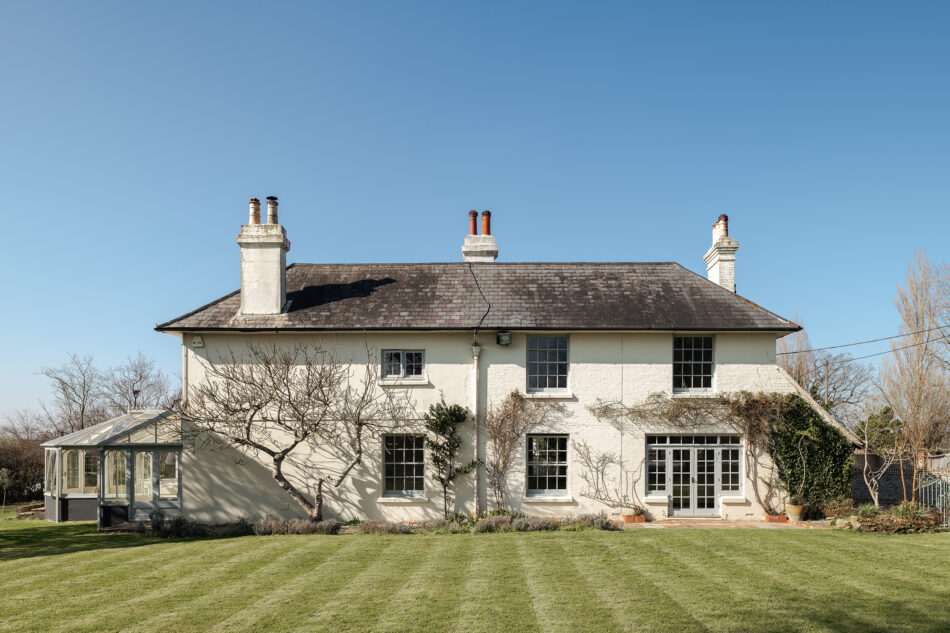 Private gardens extend over four and a half acres and are filled with olive trees and grapevines, as well as trees bearing plums, apples, and soft fruits

Scotches Farm is a wonderful five-bedroom Georgian house built circa 1750, with later Victorian additions. Extending over 3,600 sq ft internally and surrounded by private gardens, the house sits at the end of a picturesque village with far-reaching views over the rolling South Downs beyond. It makes for a self-contained, bucolic spot; with three natural ponds (plus the wildlife they accommodate) and a pool surrounded by limestone slabs, there is a strong sense of connection between the house and its surroundings. With eggshell blue window frames and a sweeping glazed orangery, the house is largely south-facing and is bathed in light throughout the day.

For a long time, the house was originally thought to have been an inn due to the references in its address: Scotches Farm, Malthouse Lane. However, it was later established that it was, in fact, first and foremost a working farm – discovered due to its lack of cellar. That said, the house did also act as an inn, informally catering for the Pedlars Way, a route which pedlars used to transport their carriage horses from the coast to London. This route ran straight past the kitchen window, across the garden and the surrounding fields and still exists in some form to this day.

The house has all the proportions typical of the Georgian period; each generously sized room has wonderfully high ceilings and large windows. The current owners have used a distinct palette of materials in their renovations to create a refined, bright and tranquil space that celebrates the historic details of the house while simultaneously ensuring it is fit for modern life. They have celebrated the original materials of the house – painted flint and solid oak – and used these elsewhere, as evidenced in the sweeping boundary wall and the floorboards which run underfoot throughout most of the house. The house has a rather artistic heritage; the previous owner was an actress and ran a theatre from one of the barns, while the current owner is a painter.

Entry to the grounds is through oak gates and into a sweeping gravel driveway with parking for numerous cars. To one side there is a stable block. The formal entrance, through the solid oak porch, opens into a wide hallway with Cathedral limestone tiled floors. To the left is a sitting room of magnificent proportions, warmed by a wood-burning stove. This room is double-aspect, extending the width of the house, so is incredibly light throughout the day. Beyond is a kitchen with Carrara marble worktops, a wide butler sink, a royal blue four-oven Aga and a dining area. This room has the same limestone floors found elsewhere in the house; here, they lead out to the garden via a pair of glazed French doors. There is a utility room tucked behind another door and a separate boot room which also acts as a side entrance.

To the other side of the house are three interconnected rooms: first, a formal drawing room, with the same high ceilings and large windows found in the sitting room. This room opens into a large wooden-framed glazed orangery, which covers the southern gable of the house. This is a fantastic, airy space, used by the current owner both to paint and exhibit her work. It is a brilliantly intricate instruction with soaring ceilings and views over the garden, including over one of the ponds and the fields beyond. In turn, this room feeds into a smaller, more intimate room, painted a muted green, with fireplace and clay floor tiles.

Upstairs are the five double bedrooms, including one en suite at the southern end, connected by a wide sunlit hallway and each painted in a different colour. To the left of the staircase is a large shared bathroom, with pastoral-themed black and white wallpaper depicting arable scenes. Here there is a freestanding bath, a walk-in shower and an old-fashioned WC.

The house is surrounded by private gardens which extend over four and a half acres and are filled with numerous plants and trees. Near the house are a collection of green olive trees, a fig trees, and grapevines, as well as trees bearing plums, apples, pears and soft fruits, and an extensive kitchen garden. Beyond the garden is a wildflower meadow, where the owners once kept horses. There are three natural ponds in total, all bordered with beautiful flowers and home to an abundance of wildlife. The paddock overlooks rolling fields, with views extending across the South Downs; as such, the house feels incredibly rural despite its connections to Hurstpierpoint and London.

Planning permission has been granted for a large studio space with WC and kitchen. The building follows the footprint of the current stable block, but would be completely new, two storeys and a similar size to a three-bedroom house. The architect has taken inspiration from the house and has made use of the same palette of materials: limestone, oak and flint.

Scotches Farm is in a fantastic position at the foot of the South Downs, within the vibrant village of Hurstpierpoint. The village plays host to many local traditions, such as the St Lawrence Summer Fair which was granted a Royal Charter in 1313 and has happened every year since. There are many good pubs nearby, most of which are within walking distance. Nearby is the village pub, The New Inn, whilst the The Sportsman is another lovely local pub, The Bull is an award-winning gastropub in Ditchling and The Ginger Fox is a nearby restaurant known for its high-quality seasonal produce. Celebrated Hurst College can be walked to across the neighbouring fields, or is a short drive away. There are many other good private and state schools nearby, such as St Lawrence, a primary school in the village, and Brighton College.

The current owners frequently make the short trip to Brighton or Hove to walk along the beach and enjoy the array of independent shops and restaurants found there, including The Salt Room and The Chilli Pickle. The area’s proximity to Brighton and accessibility to London makes for a wonderful, creative community.

Trains from Haywards Heath to London Victoria take under an hour, whilst the drive is approximately an hour and a half into central London. From Scotches Farm, Brighton is only 10 miles away which equates to 25 minutes in the car or 10 minutes by train.

Please note that the sellers of this property have a family connection to an employee of Inigo.

Please note that all areas, measurements and distances given in these particulars are approximate and rounded. The text, photographs and floor plans are for general guidance only. Inigo has not tested any services, appliances or specific fittings — prospective purchasers are advised to inspect the property themselves. All fixtures, fittings and furniture not specifically itemised within these particulars are deemed removable by the vendor.
Scotches Farm — Hurstpierpoint, West Sussex
Interested? Let’s talk