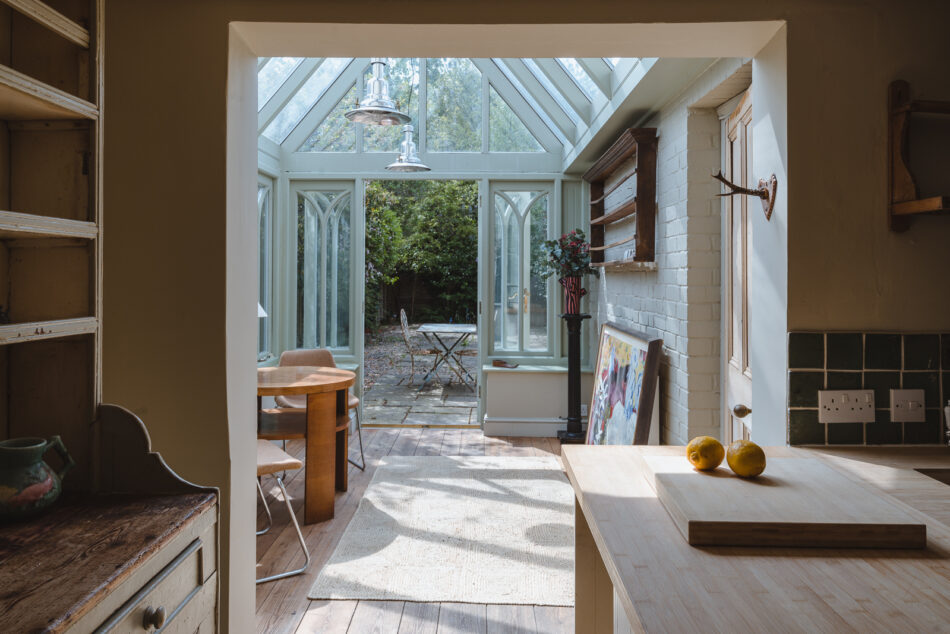 Built in c1880, it has been home to many, and has grown in size with the addition of a beautiful light-filled conservatory to the rear

This pretty three-bedroom cottage lies on a quiet street in the centre of the bucolic village of Cookham. The area is famous for being home to the celebrated painter Stanley Spencer, and its proximity to various beautiful rural walks yet it is a short distance to London Paddington via train. The house has been thoughtfully renovated by the current owner, founder of interior design studio The Curious House, and is complete with a light-filled, wooden-framed conservatory.

The village of Cookham is closely associated with the 20th-century painter Sir Stanley Spencer, who lived in the village until his death in 1959. It is thought that a lover of his used to live next door to this cottage, and as a result, it appears in some of his paintings. The old Methodist chapel on the high street now houses the Stanley Spencer Gallery and over 120 of his works. Cookham was also home to Kenneth Grahame, author of ‘The Wind in the Willows’, which he is thought to have written in the village and been inspired by the river which runs between Cookham and Henley.

The house was built in c1880 for a local merchant. It has been home to many since then, and has grown in size with the addition of the beautiful conservatory and a new bedroom in what would have been the attic.

A white-painted fence opens onto a path that leads through a small but beautifully planted front garden and past a wisteria-covered wall, to the front door. This, in turn, leads into a hallway and through to the kitchen. Farmhouse in style, the cabinets have been painted a neat grey, updated with bamboo worktops and set against green square tiles. This room is bathed in light throughout the day since it is open to the conservatory, which doubles as a dining room. At the front of the house is a sitting room with a sash window, a working fire and tiled floor. There is also a useful utility area on this floor, which adjoins a bathroom. There are attractive reclaimed cast-iron radiators throughout.

An original staircase leads to the first floor and two bedrooms, one of which is currently used as an office. Both are complete with fitted cupboards, with doors from Lassco. The principal bedroom has original, now white-painted floorboards and an en suite shower room.

Upstairs the owners have extended into what was once the attic to create a spacious double bedroom with far-reaching views across the rooftops of the neighbouring houses. There is a luxurious freestanding bath as well as further fitted cupboards with similar reclaimed doors. They have made sure to retain some useful storage space in the eaves.

The house is bookended by two verdant gardens; the front is thoughtfully planted and provides additional privacy for the house, while the rear garden is framed by mature trees and bushes. The owners bought an olive tree with them from their previous garden, and it is joined by other fruit trees. Gloriously south-west facing, the garden and conservatory see the sun for most of the day.

Cookham is a pretty village, next to the River Thames and arranged around a large village green. As well as having a station a short walk from the house, it also has all the shops that you would need. A wine shop and bar called the Old Butcher’s Wine Cellar, Deliciously French, a great deli, and Pizza restaurant, Pizza Dreams. There are also numerous good pubs such as The Ferry, which sits right on the water.

Marlow is also under fifteen minutes by car and ten minutes by train from Cookham and is home to many brilliant independent eateries and shops. Tom Kerridge’s restaurant The Coach is there; a one Michelin-starred pub with a lovely relaxed atmosphere, as well as the celebrated restaurant – Sindhu – which serves delicious modern Indian food, again with views over the Thames.

There are many fantastic walks locally, along the Thames, in the Chiltern Hills, as well as around the National Trust owned Maidenhead and Cookham Commons.

The area is very good for schools, from the independent school, Herries Preparatory School, to secondary schools and grammar schools in Maidenhead. Girls school Wycombe Abbey is located nearby, whilst for boys, there is John Hampden Grammar School.

Cookham has exceptionally easy access to London, with trains running to Maidenhead in under ten minutes and from there to Paddington in around 40 minutes. It will also be on the Crossrail line when it is up and running, reducing the journey time to London to approximately 20 minutes. The drive into central London is just over an hour as the house sits close to the M4 and M40, respectively.

Please note that all areas, measurements and distances given in these particulars are approximate and rounded. The text, photographs and floor plans are for general guidance only. Inigo has not tested any services, appliances or specific fittings — prospective purchasers are advised to inspect the property themselves. All fixtures, fittings and furniture not specifically itemised within these particulars are deemed removable by the vendor.
School Lane Cottage — Cookham, Berkshire
Interested? Let’s talk