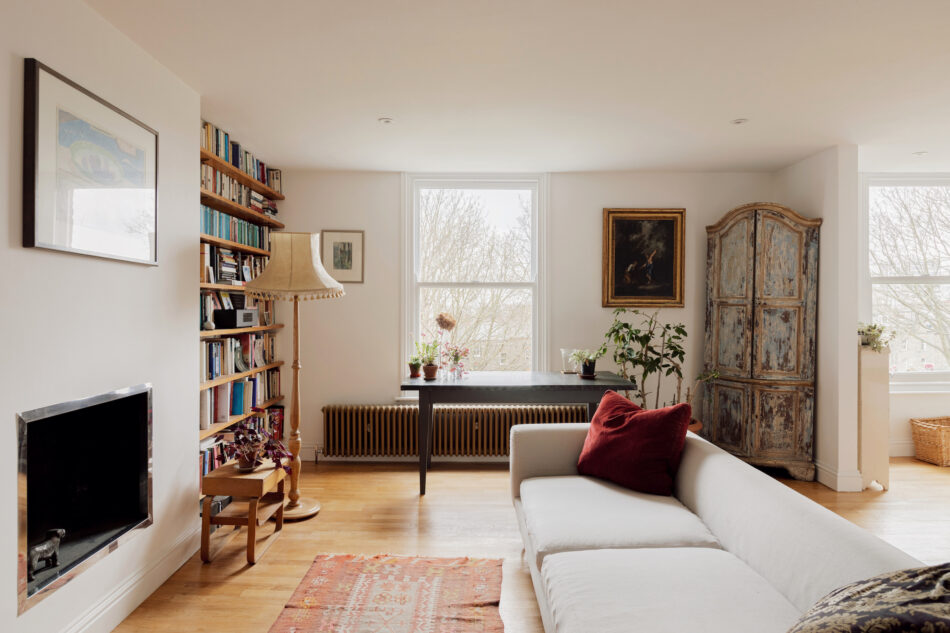 Elaborately carved foliage sits atop stucco window pilasters, entrance columns and the porch’s central pediment, while glorious views extend to the City and beyond

This wonderfully light-filled duplex apartment lies within Hampstead’s South Hill Park conservation area. Positioned on the uppermost floors of a handsome Victorian redbrick house, the two-bedroom apartment sits upon a peaceful tree-lined street in an enviable position on the very edge of Hampstead Heath. Internal accommodation extends to almost 1,300 sq ft, and the apartment enjoys unparalleled views across central London. Incredibly well positioned for local amenities, it is equidistant to the local provisors, cafes and restaurants of both South End Green, and across just the heath, to Swain’s Lane.

Joseph Pickett developed Nassington Road and its immediate adjuncts of Parliament Hill and Tanza Road on land he had leased (and farmed) from the Ecclesiastical Commissioners. The area formed part of South End Farm, which had been cut off when the newly laid out railway bisected the land. Due to its position on higher ground, and the fact it backed onto the heath, this side proved more attractive than the southern part of the farm, which was developed at the same time by T.E. Gibbs.

These roads to the north of the line were laid out in 1878-90, and the houses were built between 1879 and 1892. The planned extension of the roads into Lord Mansfield’s lands in St. Pancras borough was halted by the addition of Parliament Hill Fields to the Heath in 1899. The abrupt termination is an important indicator of the historical development of the conservation area and the history of Hampstead Heath itself.

Discreetly set back from the road, the house is built from red brick in the Gothic Revival style that the Victorians found so enchanting. Influenced by John Ruskin’s seminal guide ‘The Stones of Venice’, the style is typified by the elaborately carved foliage at the tops of the window’s pilasters, the entrance columns and the porch’s central pediment, as well as the steeply pitched slate roof.

Private entry is on the first floor and immediately to a beautiful open winding staircase, which acts as a spine of sorts to the apartment and connects all floors. Primary living quarters are set on the second floor, with the spacious living room positioned to the rear of the plan, leading seamlessly to the kitchen and dining area. Both rooms enjoy glorious views that extend from Fitzrovia and the famed British Telecom Tower through to Canary Wharf, with the glass towers of The City in between.

The living room has deep bookshelves set into wide alcoves on either side of a contemporary open hearth. Two large box sash windows, set to the rear, frame the south-facing views beyond and allow a wonderful quality of light to flood the room. The kitchen is defined by slabs of thick-cut granite that rest atop chalk-white cupboards, with appliances concealed within. Laundry facilities are cleverly housed in a separate cupboard off the main entrance hall, next to the bathroom and separate WC.

Currently used as a study, the secondary bedroom is to the front of the plan and features a wall of floor to ceiling cupboards and a handsome black marble chimneypiece. The room enjoys an open outlook up a tree-lined road and across the green fields of Parliament Hill

Ascending to the apex of the house, in the roof’s pitch, is the main bedroom and en suite bathroom, with its own private  balcony spanning the width of the room. Reached through expansive quadrilateral glass doors, the views from here are at their most spectacular; the south-facing aspect of the room makes it the perfect spot to watch the sun rise and set. The space acts as a secluded eyrie and has been thoughtfully designed so the bed can look directly out to the cityscape beyond – particularly wonderful in warmer months with the glass doors wide open. Further fenestration is set into the roof’s pitch in the form of conservation-grade Velux windows, allowing additional light into the room; a bank of cupboards along the far wall offers plentiful wardrobing.

The roof’s gable end beautifully accommodates the large en suite bathroom, with the bath boxed in limestone; a corresponding vanity unit is set beside the window and houses a double sink.

Nassington Road is very well located, bordering the south-eastern end of Hampstead Heath at the base of Parliament Hill. The Heath offers freshwater swimming year-round in the men’s, ladies’, and mixed Bathing Ponds, as well as some of London’s most beautiful woodland walks. Parliament Hill Lido is just five-minutes walk away. In addition to elevated views of the city from Parliament Hill, there are tennis courts, cafes and Kenwood House, a wonderful 17th-century country house and gallery.

The apartment is also a short walk from the quality provisors and cafés of South End Green, which include and a branch of the much-loved Gail’s Bakery  and the independent Redemption Roasters. The centre of Hampstead Village is also in walking distance, with its excellent variety of further larger shops such as Planet Organic, restaurants and cultural distractions, including the Everyman cinema. Across the heath, towards Highgate, is Swain’s Lane and its wonderful array of independent suppliers, including Bourne Fishmongers and Fam Greengrocers. Additionally, there is a weekly farmer’s market every Saturday morning on Parliament Hill’s eastern side.

Transport links are excellent, with the London Overground at Hampstead Heath station just a two-minute walk away. Nearby Belsize Park and Hampstead underground stations are on the Northern Line and ten minutes away by foot.

Please note that all areas, measurements and distances given in these particulars are approximate and rounded. The text, photographs and floor plans are for general guidance only. Inigo has not tested any services, appliances or specific fittings — prospective purchasers are advised to inspect the property themselves. All fixtures, fittings and furniture not specifically itemised within these particulars are deemed removable by the vendor.
Nassington Road — London NW3
Interested? Let’s talk