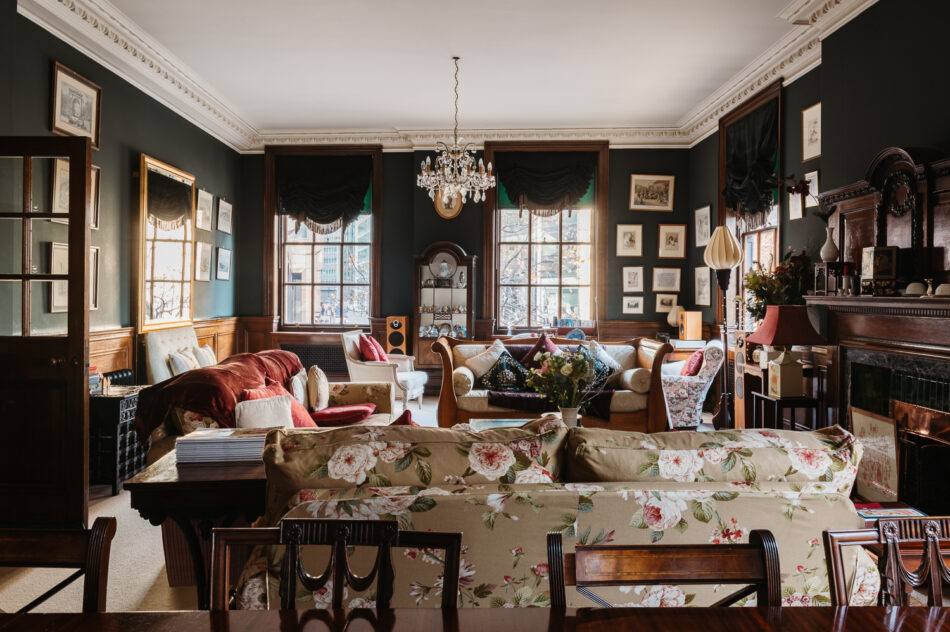 The elaborate marble fireplace surround is decorated with a carving in the shape of a lamb, the symbol of Christ's Hospital

This spectacular two-bedroom apartment is located on the first floor of what was once the building for the trustees of Christ’s Hospital. Located in an incredible position in the City of London, the apartment has views straight over Byward Street to the Tower of London. Grade II-listed and extending over 1,600 sq ft, many of the building’s original features remain, such as the marble floors, ornate fireplace surrounds and wooden panelling.

The building was constructed circa 1914. It was designed by architect Arthur Conran Blomfield (1863-1935), most renowned for his work on the Bank of England building, and once housed the new offices for Christ’s Hospital. Whilst half of the building has medieval roots, the wing in which this apartment is situated was constructed at the beginning of the 20th century.

This apartment, which now comprises two bedrooms and an expansive sitting room, would once have housed the chairman’s office and the board room. The building was subsequently home to a NatWest bank before being converted into flats; indeed, heavy bank vault doors are still found in the basement. The whole building is Grade II-listed, including the internal woodwork, which has ensured that the ornate panelling and incredible fireplace within have been preserved. For more information, please see the History section below.

Entry is into a wide hallway with marble floor tiles and an expanse of wooden-framed glazing, which frames views into the grand reception room. Within, there are exceptionally high ceilings and large sash windows, which bathe the room in light and ensure the space can afford to be painted the atmospheric dark green, by Zoffany, that it is. Once the hospital’s board room, it was intended as a display of its wealth and importance. As such, there is a variety of intricate detailing, from the refined cornicing which crowns the room to the engaged pilasters that form the window frames. A central fireplace provides a focal handsome point, made from green tiles, marble and beautifully carved wood.

A recently renovated kitchen is located in the centre of the plan. Storage takes the form of smart, white cabinetry, including a row of useful wine storage; granite tops sit above, while a square-tiled floor unfolds below.

The principal bedroom – once the chairman’s office – is a room of lovely proportions, arranged around an elaborate marble fireplace surround. Carved onto one side is a lamb, the symbol of Christ’s Hospital. This room also has an en suite shower room. A door leads straight into the second bedroom, which was once the secretary’s office. The same wooden panelling and cornicing feature as in the main bedroom; there is a door here that opens back into the old board room. There is also a generous shared bathroom.

The building is situated in a wonderfully central position, a stone’s throw from the banks of the Thames and directly opposite the historic Tower of London. Located in the City itself, it is also close to Spitalfields and Whitechapel, as well as being within walking distance of the Barbican.

There are some fantastic restaurants nearby; Ambala has excellent Indian sweets and snacks, Tayyabs is renowned for its Punjabi food, and Som Saa for its Thai cuisine, while much-loved St John Bread and Wine is on nearby Commercial Street and Ottolenghi is in Spitalfields. There are also plenty of great traditional pubs within the City, such as neighbouring The Hung, Drawn and Quartered,  Blackfriar and Counting House. The Whitechapel Gallery, Curzon, Rich Mix and Genesis cinemas are also close by.

The south side of the river is a short walk from the house, as are the Tate Modern, Shakespeare’s Globe, as well as Borough Market – all easily accessible by foot.

The area has excellent transport links, including Tower Hill underground (Circle and District lines), Tower Gateway DLR, the Thames Clipper and the new Elizabeth Line at nearby Liverpool Street Station.

Architect Arthur Conran Blomfield (1863-1935), son of the prolific architect Arthur William Blomfield, was a talented architect in his own right. He was best known for his design and building of the Bank of England.

Christ’s Hospital Building is found in an incredibly historically rich area of London, just in front of the city’s famous Tower of London. A world heritage site, and the official Majesty’s Royal Palace and Fortress, it is also famously home to the Crown Jewels. The tower was founded towards the end of 1066 as part of the Norman Conquest.

The City of London, otherwise known as The Square Mile, where this apartment is situated, is the oldest, most historic part of London. Unusually for London, it has a ratio of 33 times more workers than residents. It is also not categorised as a borough but rather is a small, distinct district which sits in the centre of the capital. It was established circa 50AD, just seven years after the Romans invaded Britain; indeed, remains of the city’s wall can still be found in various locations.