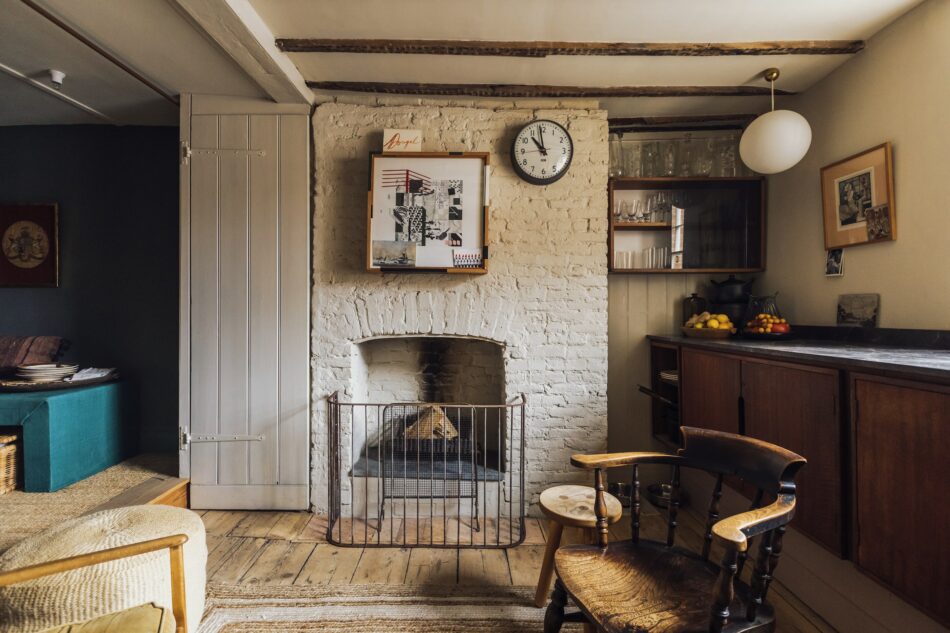 This Grade II-listed, four-bedroom duplex apartment extends across the first and second floors of a building that shares the rich history of Hastings. Covering more than 1,325 sq ft, it is located on the high street in the heart of Hastings Old Town. The house has had a plethora of commercial and domestic uses over the centuries; the core of the building, believed to date from the 17th century, was repurposed from an earlier Wealden hall house, while additions to the front rooms and the street-facing façade were made at the turn of the 19th century. The interconnecting Medieval and Georgian components of the building have resulted in its wonderful split-level plan.

The town of Hastings rose to prominence following the Norman Conquest in 1066, becoming strategically vital for trade with the continent as one of the ‘cinque ports’ of Kent. These semi-autonomous regions largely controlled all trade between the kingdoms of the British Isles and mainland Europe. However, political change, the increased size of merchant ships, and violent storms contributed to the area’s decline as a shipping hub in the late Medieval period. The town did not develop much further until its renaissance, which began in the 18th century. Around this time, with rising instability on mainland Europe and, later, the threat of Napoleonic invasion looming, defensive garrisons began to crop up in the area, making the most of the town’s strategic positioning.

The apartment has been painstakingly restored and renovated by the current owners, who have delicately revealed an abundance of original features, many of which had been covered in the last century. They have created a series of light and flowing interconnected spaces that respect the building’s fabric, are rich in individual character and have a subtle contemporary flair.

The floorplan is in excess of 1,325 sq ft internally, spread across four half-storeys. By happenstance, such a layout is redolent of proto-modernist Adolf Loos’ ‘Raumplan’ theory, in which the rooms of a building’s plan are treated as a series of interconnected three-dimensional cubes, creating dynamic half-storeys.

The apartment is accessed via the ground floor from the high street, the door opening into an entrance hall lit by transom glazing above the door. A flight of stairs leads up to the kitchen/dining room. The kitchen area, painted a wonderful warm yellow and with reclaimed teak cabinetry, has been fitted with a high-quality range. Separated from the cooking space by a small step is the dining area, occupying an alcove and painted in a contrasting warm green. The working fireplace has been stripped back to brick and is the heart and hearth of these conjoined spaces.

A half-flight of stairs leads to a light-bathed reception room, with another functioning fireplace and wonderful joinery details. Here, the walls and ceiling are painted a deep and cocooning denim blue. To the rear is a bedroom, which is currently used as a study.

A further staircase leads to the second floor and two large bedrooms, one of which has another working fireplace. To the rear of the plan and up another staircase is a smaller bedroom and a large bathroom, a decorative tour-de-force with reclaimed joinery and hardware of sumptuous quality. The view out of the window from the large round bath, which is also fitted with a shower, stretches over the old town rooftops and up to the East Cliff. There is another fireplace in the corner of this exquisite room.

Hastings is a thriving town, perennially popular in creative communities. Such are the idiosyncrasies of the area that, in 1990, the art critic Jonathan Meades suggested the town be renamed as Bohemia.

The old town is home to some legendary antique traders and independent retailers, including Hastings Antiques Warehouse, AG Hendy & Co, Warp and Weft, Endlings, Roberts Rummage and Ode Interiors. Art galleries are likewise abundant. The most significant is perhaps Hastings Contemporary (formerly the Jerwood Gallery) by HAT Projects, though there are many others of note, including The Rebel Gallery, Lucy Bell Fine Art and The Memorial Gallery. All are a short walk from the apartment.

An ever-growing number of restaurants and eateries locally are boosting Hastings’ gastronomic reputation, including Rock-a-Nore Kitchen, The Crown, The Albion and local stalwart Maggie’s Fish and Chips. On the High Street, Judges Bakery (founded in 1826) and Penbuckles delicatessen are perfect community food shops, while the family-run Rock-a-Nore Fisheries, a short walk away, sells the daily catch from the local boats.

Hastings station, a 15-minute walk from the apartment, has frequent services to London (journey time to London Bridge one hour 20 minutes, Charing Cross one hour 30 minutes)

Please note that all areas, measurements and distances given in these particulars are approximate and rounded. The text, photographs and floor plans are for general guidance only. Inigo has not tested any services, appliances or specific fittings — prospective purchasers are advised to inspect the property themselves. All fixtures, fittings and furniture not specifically itemised within these particulars are deemed removable by the vendor.
High Street — Hastings, East Sussex
Interested? Let’s talk