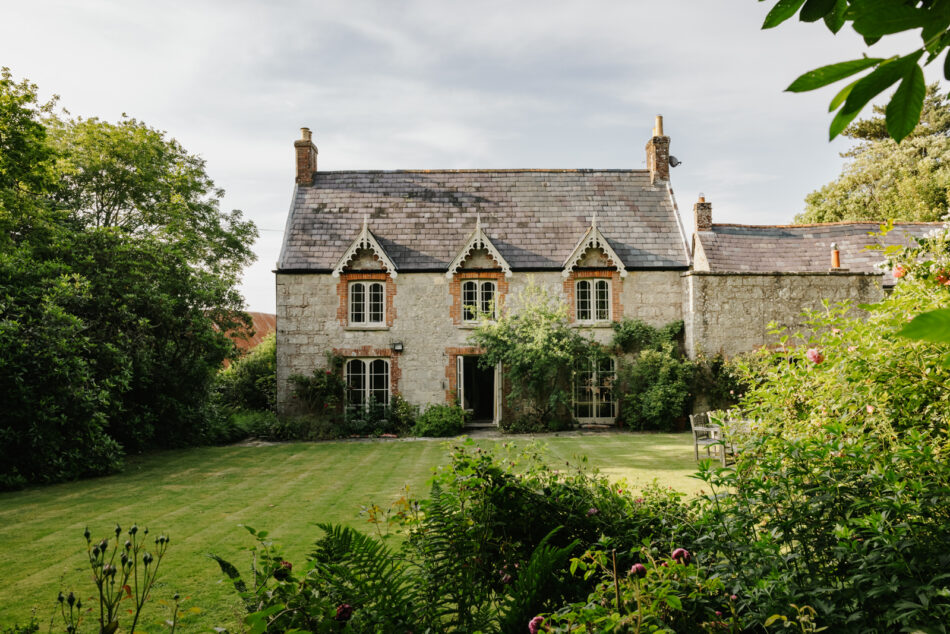 Seldom is a better example of rural vernacular architecture seen, with the history of the British Isles over the last millennia manifest in stone

An established smallholding in the Domesday Book of 1086, the Grade II-listed, utterly enchanting Gotten Manor has been an inhabited farm for at least the last thousand years. Set on high ground but sheltered from the elements, the house has views off the south coast of the Isle of Wight and is a protected haven, surrounded by abundant, mature planting and cocooned by the adjacent hilltop. Now occupying a very manageable plot of five acres, many of the outbuildings, vital to its former use as a mixed-use farm, have been converted to exemplary self-contained accommodation with the potential to provide significant income.

A multi-millennia palimpsest of life and activity, the house and farm buildings have evolved over the centuries; seldom is a better example of rural vernacular architecture seen. It bears and displays the history of the British Isles over the last millennia manifest in stone, with Jutish origins – a Nordic tribe who settled in Britain around 388 AD – and a fascinating life in the ensuing years. For more information, please see the History section.

The east end of the house was predominately constructed in the 13th century, with a second house built in the 17th century and a small yard separating them. After the construction of the second house, which now forms the main garden elevation, little changed until the mid-19th century, when Gotten Manor was passed from a landowner and merchant in Imperial Russia to a descendant of his, Lieutenant W.H. Dawes, who fought in the Crimea. Dawes joined the two buildings together, creating the entrance hall and the library, as well as extensively remodelling the garden side of the house, establishing the aesthetics of the house as it stands today.

A lane with high hedgerows leads from Chale Green to Gotten Manor. Totally sheltered from the nearest road and set within its own land, the sweeping drive first passes the long barn and the former cart house, now secondary accommodation. This leads to the main entrance, which is arranged around a courtyard with parking for several cars and a double garage. A sunken walled, fruit garden is the focal point of the courtyard and features a charming apple tree along with many other mature fruit trees and shrubs.

The main entrance is a simple affair with a covered porch, which sets the tone for the welcoming atmosphere within the house. This leads to a large stone hallway, formerly a yard between the 13th-century building to the left and the larger 16th-century building to the right, constructed in the mid-19th century. Evidence of its former outdoor setting can be seen in the still-functioning 17th-century water pump with a medieval stone basin.

The main hallway leads to a large, country kitchen, which is home to an Aga, extensive raw-wood worksurfaces, double butler sinks and terracotta floor tiles. A service hatch connects the kitchen and dining room, the latter of which is wonderfully proportioned and features an inglenook fireplace with a wood burner, stripped to back to stone. A beautiful, art nouveau-inspired wallpaper by Farrow & Ball lines the south wall, where double doors open onto the lawn.

Lying adjacent to the dining room are the library to the left and a snug to the right, both of which have double doors opening onto the lawn. The snug is lit from both south and west and features a large fireplace with an 18th-century stone surround and pediment. The library is lined with fitted bookshelves and also has a wood burner. In addition, there is a large utility/scullery, with a pantry and guest cloakroom radiating from this.

Two bedrooms and a nursery lie on the first floor, all large enough to accommodate double beds, along with the large, family bathroom. The main bedroom has a contemporary en-suite bathroom and also features a bath in the bedroom, with views of the cliffs and sea. On the second floor are two similarly large bedrooms.

The 13th-century wing encompasses a large, stone-floored drawing room featuring a medieval inglenook fireplace with a wood burner, bread oven and the original ‘copper’, a pre-industrial water heater. This benefits from fenestration on both the north and south façades, ensuring ample light throughout the day. Adjacent to the drawing room is a tremendous, double-height space currently used as a breakfast room. This leads to one of the two large bedrooms above, both exceptionally voluminous spaces with limewashed walls, floorboards underfoot and en-suite bathrooms with whimsical and romantically located baths.

The secondary accommodation is made up of the former cart house and milk house. The milk house now contains three bedrooms, a living area and a kitchen. More contemporary in aesthetic than the main house, large apertures provide the rooms with tremendous amounts of natural light and frame staggering views of the surrounding landscape. The renovations made to the cart house are similar in character; it is now two separate dwellings, both of which have a large, open-plan kitchen/living space and two bedrooms.

There are numerous other outbuildings with tremendous potential for further development, most notably the long barn, a vast, late-medieval structure with a plethora of potential uses.

Gotten Manor has commanding views of the coastline to the south yet is invisible from any road; it is a secluded haven of tranquillity. The formal garden lies to the south of the house and has a large lawn with a well. Mature borders line the lawn and lead to a kitchen garden and a swimming pool beyond, currently in need of recommissioning.

A wildflower meadow separates the long barn and the main house from the cart house. There are further gardens amongst the former orchards.

The Isle of Wight received UNESCO Biosphere Reserve status in 2020, ensuring its protection for the future. The south coast of the island is the wildest and most rugged part, with Gotten Manor found at the heart of its AONB. There are unending coastal walks and beaches including the C3 Bridleway, which is on the doorstep, leading on to St Catherine’s Down which has wonderful views along the south coast and most of the island. Several good delicatessens and farm shops are within a 20-minute drive, including Farmer Jacks, with produce from the Isle of Wight Cheese Company, The Island Bakers, and The Tomato Stall.

Ventnor is the nearest major town and also has a beautiful beach. It is home to the Smoking Lobster, one of the best restaurants on the island. The Ventnor Fringe takes place annually in July and acts as a warm-up to the Edinburgh Fringe. There are also multiple surf spots along the south coast of the island with the best and most reliable swells to the west, lessons and boards can be rented through the IoWSurf.

There is a good local primary school in Niton along with The Island Free School in Ventnor for secondary education. Fee-paying options can be found at Ryde School. There are also many outstanding boarding schools along the south coast of the mainland.

London Waterloo can be reached in two hours via the Ryde passenger ferry, a 30-minute journey by car. Car ferries run frequently to Portsmouth, Southampton and Lymington, with the crossing taking around 45 minutes.

The site was first settled by the Jutes, a Nordic tribe who settled parts of the British Isles following the Roman withdrawal of Britain circa 388 AD. By the time of the Domesday Book, it had come under the ownership of the Bruning Brothers. The Manor was then passed onto ‘William, son of Stur’ during Norman rule and at the time comprised roughly 120 acres.

There is little further mention of the Manor until 1305, when it was written about in local records: “the tenement being extended as a Hall, a Grange, an Oxstall, with half an acre of Garden, a Dovecot, 30 acres of Arable, 20 acres of Pasture and one Free Tenant rendering 12 pence per annum”.

In 1313 the custodian of Gotten Manor, Walter de Goditon, became embroiled in an infamous shipwreck at Chale; a ship carrying 174 casks of white wine from Aquitaine to England washed against the rocks and the cargo was looted from the beach by locals. A contemporary investigation found the ringleader to be none other than Walter de Goditon. A long trial ensued, culminating in Walter being summoned to Westminster, where he was found guilty. The size of the fine received forced the selling and donation of much of his land, an acre of which was donated to the Church and led to the building of St Catherine’s Oratory lighthouse, a significant landmark on the south coast of the Isle of Wight which protected ships for centuries and remains standing to this day.

The farm remained ‘in hand’ until the late 1930s, at which point it was leased and the current plot that makes up Gotten Manor today came into being.