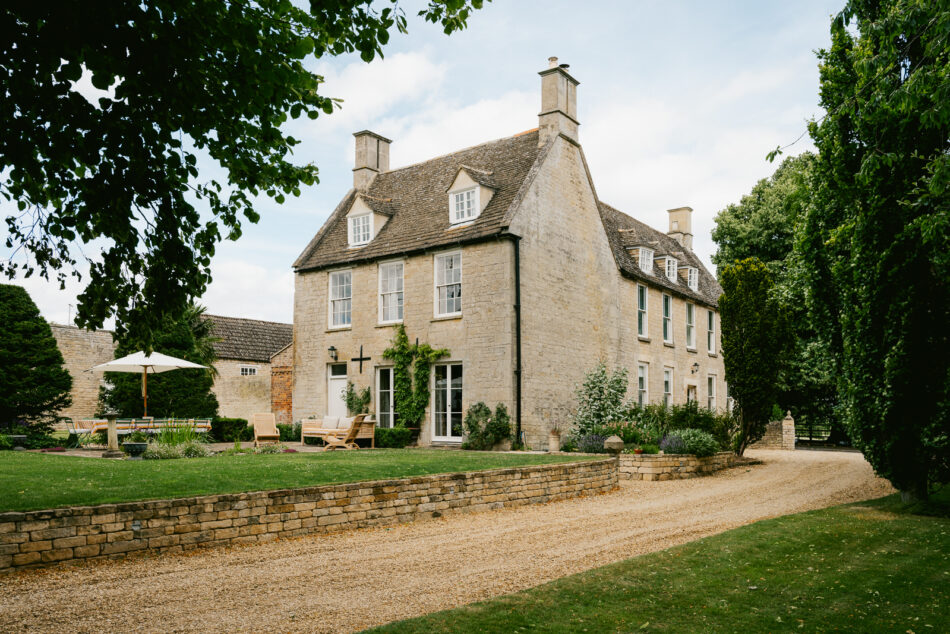 The owners made many brilliant discoveries, revealing walls of Georgian panelling, alongside stone, marble and slate fireplace surrounds and original flagstones found in the cellar

This incredible Grade II-listed house has been meticulously restored by the current owners to create a wonderful family home filled with original features and surrounded by beautiful Lincolnshire countryside. Extending over 4,500 sq ft internally, the house comprises seven bedrooms and is set within approximately seven acres of expansive paddocks, parkland and gardens, complete with stabling and a tennis court. A short drive from the popular Georgian stone market town of Stamford – recently voted one of the UK’s best places to live and a place that John Betjeman described as “England’s most attractive town” – the house feels rural while being close to a plethora of nationally renowned schools and amenities. The estate’s stone-built former dairy, which had been sold off, has been reunited with the Manor unifying the internal courtyard once more; it has planning permission for conversion into a detached three-bedroom house with its own separate driveway.

This substantial manor is believed to date in part from the late-17th century with later additions in the 1800s. The house has a wonderfully classical façade and generously proportioned Georgian windows. The house is found on a no-through road in the pretty village of Careby, which has its roots in a Viking settlement.

The pretty town of Stamford is just over five miles from the house and has been much revered historically. Pevsner said “the climax [of this region] in terms of historical as well as architectural significance, is… the town of Stamford, the English country market town par excellence.” Whilst the celebrated historian W. G. Hoskins said: “If there is a more beautiful town in the whole of England, I have yet to see it.” For more information, please see the History section.

The house has undergone a recent and thorough restoration. Special attention has been given to behind-the-scenes improvements of the plumbing and electrics, as well as stone work and chimneys, in tandem with more cosmetic updates. The current owners have considered the building’s origins throughout their renovations, re-liming the walls and restoring many of the original Georgian features. They also made many brilliant discoveries, revealing wall upon wall of Georgian panelling, as well as local stone, marble and slate fireplace surrounds and original flagstones in the cellar.

The main entrance opens into a wide hallway with staircase. From here, one door leads to the kitchen and another leads to the drawing room. The updated kitchen comprises cabinetry from Neptune, Carrara marble worktops and DeVOL brass taps. Traditional cast-iron radiators have been installed throughout.

The drawing room has sturdy traditional manor features: exposed beams and a hearty local stone fire-surround with a wood-burning stove. This bright room has been painted a gentle Jonquil by Edward Bulmer, whose rich pigments have been used throughout the home.

Towards the rear of the house is a light-filled dining space with glazed doors, which open onto a sun terrace. Adjacent to the dining area is a library with walls lined with floor-to-ceiling bookshelves. The original entrance to the house opens into this room, via a vestibule, off which is also found the downstairs WC.

Ascending to the first floor, a corridor comprised of beautiful original Georgian panelling gives access to the bedrooms. The principal bedroom, which enjoys far-reaching views over the garden and acreage through its two tall sash windows, is clad in its original decorative panelling and fireplace. The room is complete with a generous walk-in wardrobe and a pretty en suite bathroom with a separate shower to its freestanding cast-iron bath. On this floor, there are two more good-sized panelled bedrooms, one with a second en suite bathroom and a shared family bathroom.

The top floor is home to a further four bedrooms, two useful linen cupboards, and another bathroom, ideal for home-working and guest bedrooms.

The basement is accessed both from the main floor and externally from the original courtyard, opening into a corridor with the original larder directly in front. To the left is a lovely and well-lit second sitting room, with the original stone flag floor, pointed stone walls and wooden beams. On the other side is a useful boot room and laundry, an excellent spot to return to from dog-walks or muddy rugby games. Beyond is the wine cellar, plant room and workshop space.

The manor backs onto an expansive manicured garden arranged around a glorious lime tree, progressing to a newly installed tennis court. In fact, for those who like sports, there is a huge provision since the grounds include a pétanque court, a sheltered lawn perfect for badminton or cricket, an area for football with full-size goals and stabling for four horses with a five-acre fenced paddock supplied with spring water, and all bordered by the West Glen River. There is also plenty of space for camping.

The south-facing garden is also home to a terrace, well-placed for eating outside, and bordered to one side by a series of Victorian walled gardens, including herb, cutting and perennial gardens. The owners have also planted an array of heritage fruit trees in the already established orchard. Within the grounds are a large number of mature shrubs and trees, including the magnificent 400-year-old lime tree. There is generous parking for large-scale entertaining on both sides of the house, as well as garaging, and the dairy also has its own driveway and parking.

The house is in a fantastic position, nestled along this border of Lincolnshire and Rutland, 10 minutes from the desirable Georgian market town of Stamford. Stamford is home to numerous schools, a range of shopping and restaurants and a popular weekly farmers’ market, as well as The George of Stamford, which serves delicious food. There is also an Arts Centre with a cinema. The Burghley Estate hosts many events, from lectures by well-regarded historians to the world’s largest horse trials.

Careby itself has a handsome church, St Stephen’s, with a Norman tower. The award-winning restaurant The Olive Branch is close by, as is the village of Witham-on-the-Hill, which has another good pub, The Six Bells.

Rutland Water is just under nine miles away and is Europe’s largest man-made reservoir. It is a stunning backdrop to a great day out, with sailing clubs, an Aqua Park, fishing, a nature reserve and a cycle circuit dotted with good pubs along the way.

The house is well situated in terms of schools: it is only a couple of minutes to Witham Hall School – an award-winning prep school for boarding and day pupils – and a short drive to national senior schools including Oundle, Uppingham, Oakham and Stamford schools.

For transport, the house is well placed: nearby Peterborough station provides high-speed service to London King’s Cross in just 49 minutes, while it’s also close to the A1, which leads straight into the centre of London. Cambridge is under an hour’s drive away and has a direct train from Stamford.

The recorded history of Stamford goes back well over 1,000 years. It first came to prominence in the 9th and 10th centuries when it became one of the five controlling boroughs of Danelaw.

It was one of the first towns to produce glazed wheel-thrown pottery after the departure of the Romans. Stamford prospered under the Normans with an economy based mainly on wool; it was particularly famous for its woven cloth called haberget. The town’s excellent communication routes via the Great North Road and via the River Welland to the North Sea ensured the success of its trade.

By the 13th century, Stamford was one of the ten largest towns in England. It had a castle, 14 churches, two monastic institutions, and four friaries; parliaments met here, and there was a tradition of academic learning which finally led to the establishment of a short-lived breakaway university in the mid 14th century. Many buildings survive from this period, including the early 12th-century St Leonard’s Priory, the magnificent early 13th-century tower of St Mary’s Church, the rich 13th-century arcades in All Saints’ Church, fine 13th-century stone-built hall houses and undercrofts, and the 14th-century gateway to the Grey Friary.

The removal of the leading wool trade to East Anglia in the 15th century forced the town into decline, and the work that remained was concentrated in the hands of wealthy merchants like the Browne family.

These merchants helped rebuild many of the churches in the mid-late 15th century, including St John’s, St Martin’s and All Saints’, fine examples of Perpendicular Gothic architecture. William Browne also founded an almshouse which remains one of the best surviving medieval almshouses in England, complete with exemplary stained glass.

The town shares the stone as the Cotswolds and therefore has a similar appearance to its chocolate box towns and villages. Stamford was England’s first designated Conservation Area; a remarkable array of over 600 listed buildings have been carefully maintained.

W. G. Hoskins, the famous 1950s historian, said of Stamford: “The view of Stamford from the water meadows on a fine June evening, about a quarter to half a mile upstream, is one of the finest sights that England has to show. The western sunlight catches the grey limestone walls and turns them to gold. It falls on towers and spires and flowing water, on the warm brown roofs of Collyweston slates, and on the dark mass of the Burghley woods behind.

” The hipped and mansard roofs of the town rise from the edge of the river above the flashing willows, tier upon tier, to the spire of All Saints, and the towers of St Martin’s, St John’s, and St Michael’s, and, above them all, to the noble tower and spire of St Mary’s, the central jewel in the crown of Stamford…”