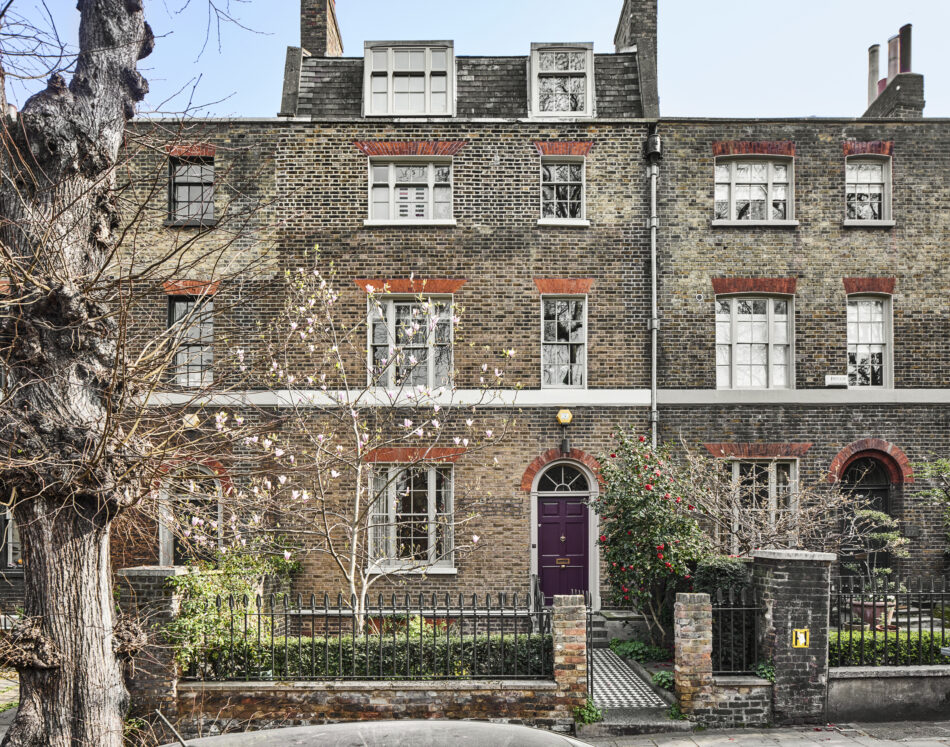 A façade of red brick dressings, coped parapets, and towering slate mansard are shielded from the coveted tree-lined street by a single magnolia tree

This exquisite Grade II-listed townhouse can be found on the coveted, tree-lined avenue of Camberwell Grove, considered by many to be one of London’s finest Georgian streets. The house, which dates to c.1776, measures approximately 3,600 sq ft across five floors and is rare for its elegant curved bays across four levels and wonderful originality throughout. It occupies an incredibly quiet position on the Grove with a private, paved garden of around 80 ft in length and a separate garden studio at its rear.

In the mid-1770s, when Camberwell was still a rural village, the dilapidated Tudor manor of Camberwell Buckingham was demolished and the surrounding land subdivided and sold. The first four houses, of which this house is one, were built by speculators at the northern end as a terrace shortly afterwards. They are jointly Grade II-listed and belong to what is now known as Camberwell Grove Conservation area. For more information, please see the History section below.

The house is set far back from the road behind a private front garden, its splendid façade of red brick dressings, coped parapets, and towering slate mansard partially shielded by a single magnolia tree.

The ground floor enters to a hallway, its scale effectively modest in comparison to the grandeur of the rooms it precedes. To the left lies a library and reading room with built-in shelving and a wide sash window looking onto the front garden and street beyond.

A doorway links the reception at the rear. This stunning room combines the aged hue of wideboard Sussex oak floors with high, corniced ceilings and a trio of sash windows within the first of four curved bays looking out onto the private rear garden. One of these bays opens as a door and leads to steps to the garden. Both receptions have open fireplaces which retain their original chimneypieces around Edwardian hearths. Much of the panelling and many of the shutters throughout the house are also original.

Stone steps lead down to the lower-ground level, where limestone slab floors extend throughout. This superb open plan space is without compromise, benefitting from the influx of natural light at two aspects, excellent volume and direct access to the garden through an enormous double-glazed door.

The kitchen is positioned at the front. It was designed by Smallbone, arranged around a marble-topped island with an exposed 17th-century oak beam. Appliances are by Miele and Gaggenau. In one corner of the room is a larder with a bottle fridge and slate shelving. Beyond the stone steps, to the front, lies a utility, a guest cloakroom and a wine cellar, and beneath the front garden are tanked former coal drops for storage. Between the kitchen and dining space is a versatile seating area arranged around a gas-fired stove.

There are four bedrooms across the upper three levels. The two principal bedroom suites occupy the first and second floors and are set within the massive rear bays. The first-floor bedroom has built-in wardrobes lined in oak, and on the same level, there is a bathroom with panelled walls and stained pine floors. The second-floor bedroom is currently used as a study, with a wealth of built-in shelving and fitted wardrobes, and has an en suite shower room with a steam shower. There is a further bathroom on this floor together with a walk-in wardrobe hidden behind panelling on the landing and two further bedrooms on the floor above.

The private garden to the rear is exceptionally long and wide. It can be accessed via stone steps from the ground floor reception or from the lower-ground kitchen and dining room, from which a large glazed door leads to a patio and paved steps upward to the garden. There is also access at the end of the garden, via an alleyway, from which garden deliveries can be made.

The garden itself is wonderfully planted on all sides, with mature trees dotted within and alongside its paved expanse. At the far end lies a charming wool-insulated garden studio with underfloor heating and an adjacent workshop/shed.

Residents’ parking is available on Camberwell Grove and for those with the vehicular or mere spatial requirements, a nearby single garage (and forecourt with space for two further cars) is available by separate negotiation.

The house is brilliantly situated moments from Camberwell Church Street and its exciting culinary scene and a short walk from Bellenden Road, Peckham’s pretty village with its excellent selection of restaurants, cafes and good pubs. The Camberwell Arms is of particular note, as well as local favourite Theo’s Pizzeria on Grove Lane, modern Italian restaurant Artusi is also nearby. The newly opened Grove Lane Deli is hugely popular for provisions, and there is a weekly farmer’s market on Camberwell Green.

The green spaces of Ruskin Park, Brockwell Park and Peckham Rye are all within easy walking distance, while local leisure facilities include the nearby Butterfly tennis club and Camberwell Green swimming pool. Local cultural distractions are plentiful and include the South London Gallery and Dulwich Picture Gallery.

Until about 1800, Camberwell was a farming village surrounded by woods and fields. The village was based around its High Street, now called Denmark Hill, in honour of Prince George of Denmark, the husband of Queen Anne, who had a residence there.

There were several mineral wells and springs in the area until about 1850. One of the village wells was reputed to have healing properties; from this legend comes a possible explanation for the name Camberwell. The old English word cam means “crooked”, so Camberwell may have meant “the well of the crooked”, suggesting that it was a place where people with physical injuries or impairments could seek a cure. It is perhaps significant that the local church is named in honour of St Giles, the patron saint of disabled people.

St Giles’ church still stands on its original site. The first church is estimated to have been built in the 7th Century. Rebuilt in stone in 1154, St Giles’ underwent many alterations over the centuries before it was destroyed by fire.