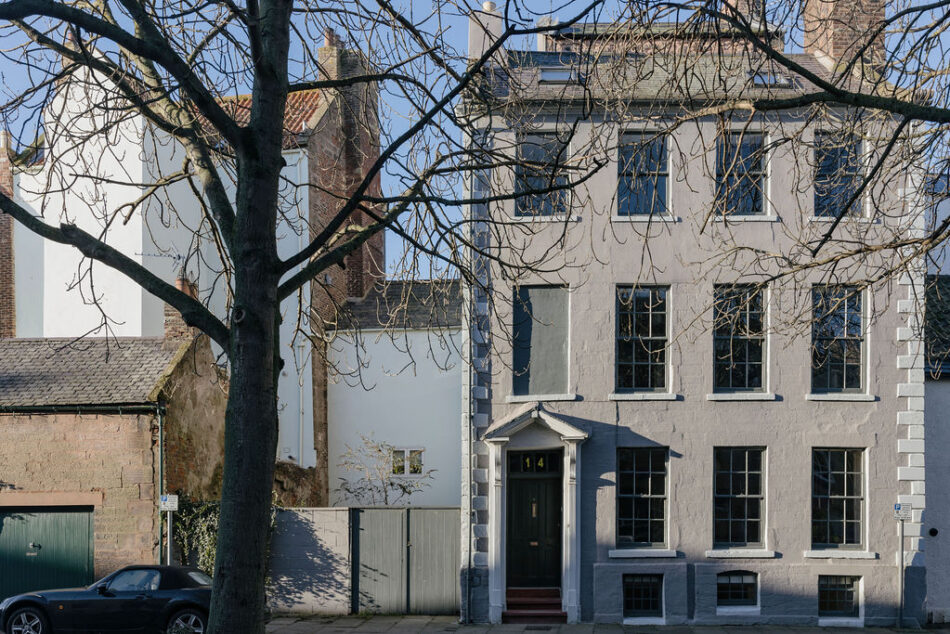 This magnificent Grade II-listed house lies in the historic centre of the coastal market town of Berwick-upon-Tweed, Northumberland. Unfolding over five storeys, the house extends to over 2,400 sq ft internally and contains four/five bedrooms. Principal glazing within overlooks a small green in front of the house, while a well-sized private courtyard garden lies to the side. The current custodian is artist Tod Hanson, who has transformed two of the rooms into truly extraordinary art installations, using the influence of the architecture to inform the optics of the works. For more about Tod’s process please read our accompanying Almanac article.

Waxwing was constructed circa 1750 for a merchant with significant interests in the activity of the port and River Tweed. The house backs directly onto the town walls, which would have allowed its original occupant commanding views of the river activity. It has a stone-built front elevation, constructed in ashlar with quoins at the corners; the body of the house is constructed in lighter-weight brick and is topped with a slate roof. The façade was restored in recent years and repainted in a neutral hue, belying the nature of the artistic interventions within. Failing chimney stacks were removed and rebuilt in reclaimed local bricks.

Within, beautiful joinery can be found in abundance; the cupboards and much of the architectural hardware is original. The impressive hall has large flagstones underfoot, wonderfully patinated from the thousands of footsteps it has received since its original purpose as an external passage through to the city wall. For more information on the surrounding area, please see the History section below.

Entry is through a classical timber portico and opens to a voluminous hall, with access to the garden to the left. To the right, a door leads to a centrally located staircase providing access to all floors. Original floorboards run underfoot throughout.

At the front of the plan is the living room, beautifully appointed and featuring original panelling, cornicing and cupboards. There is a neutral and contemporary flavour to this space, yet a simultaneous sense of respect for the home’s original fabric.

On the lower ground floor is a spacious kitchen, as well as several former vaults that are currently used as utility spaces. A single span of simple cabinetry runs along one wall of the kitchen, with a large gas range set into the chimney recess. The dimensions of the space allow for dining for up to 10 people with ease and clerestory glazing provides ample light.

A large room on the first floor runs the width of the building. Likely to have been the drawing room in days past, this now forms the pinnacle of Tod’s installation. However, it could easily be returned to its original use as a drawing room; it would work equally well as a main bedroom. The space retains its original fabric, including an elegant 18th-century fireplace with a cast iron, Victorian insert. A south-facing oculus window allows a dramatic shaft of light into the room, which moves with the seasons. A bathroom lies to the rear.

Ascending another level leads to two generously proportioned bedrooms. One of these contains another of Tod’s brilliant installations, focusing on a frame-grid motif that directly interacts with the structure of the room. Another 18th-century fireplace, also with a Victorian insert features; as with the other installation, the works undertaken do not impinge on the building’s original fabric. A second bathroom lies to the rear, mirroring the plan of the floor below.

The attic has an altogether different character, with lower ceilings and humbler decorative elements. Two bedrooms can be found on this floor, both of which are serene and cocooning spaces.

A private courtyard garden lies to the side of the house. South- and east-facing, this is home to a deep mature bed populated with shrubs and small trees. The ancient wall of the neighbouring home surrounds the space, making it feel truly ‘of’ the town.

For adventures in nature further afield, there are numerous walks along the River Tweed and beyond. Wonderful local beaches include Fisherman’s Haven Beach, Cocklawburn Beach, and the beachfront and lighthouse at Berwick-upon-Tweed itself. A five-minute walk onto the ramparts leads to walks around the historic town walls and to walks that extend for miles, with gorgeous views of the bridges, river and surrounding landscape. The Lowry Trail, named after the famed painter, takes in many of the favoured local sights.

Palace Street and the surrounding roads form a small, close-knit community at the centre of Berwick’s historical civic society. The house is a short walk from both the Berwick Museum and Art Gallery and Nicholas Hawksmoor’s Barracks and Main Guard, Britain’s earliest barracks building.

There are excellent amenities within Berwick itself, just a five-minute walk from Palace Steet, including a great selection of independent bakers, butchers and fishmongers. Eateries include The Mule on Rouge and The Barrels Alehouse pub, alongside microbrewery The Curfew and coffee roasters Northern Edge. Audela restaurant, Atelier wine bar and Indian restaurant Amran’s are also of particular note. There are brilliant independent bookstores and antique shops along Bridge Street. Live music events take place at The Barrels and Radio Rooms, while the Maltings theatre and arts institution acts as a cultural centre. Throughout the year there are food festivals, historic festivals and literary festivals, including the Berwick film and media festival every August. Important local landmarks and day-out destinations include Holy Island, Lindisfarne Castle and Bamburgh Castle, plus stately homes such as Paxton House, Mandeston House and Chillingham Castle, St Abbs and Coldingham

There is a good selection of state primary, middle and senior schools in Berwick, including Berwick Academy; Longridge Towers is an excellent co-ed independent school for all ages a couple of miles outside neighbouring Norham.

Berwick-upon-Tweed is only 45 minutes by train to the centre of both Edinburgh and Newcastle upon Tyne, while London King’s Cross can be reached in around three and half hours. The train station is a less-than 15-minute walk from Palace Street. The A1 is a short drive away and acts as the main road link to Newcastle and Edinburgh. Additionally, both Edinburgh and Newcastle International airports offer routes to most European cities and holiday destinations, as well as London Heathrow and other southern English airports.

Palace Street, on which Waxwing is located, lies within the ancient heart of the town and can trace its history to a Roman settlement surrounding a road that linked England to Scotland. Now winding through the historic heart of the town, this portion of the street is more akin to a square in character, by virtue of the green that Waxwing overlooks. Although predominately now Georgian in character, many of the grand houses that line the street have their foundations in the medieval period.

Berwick-upon-Tweed itself is the northernmost town in England, situated at the mouth of the River Tweed. A conservation area, Berwick has tremendous historic significance, which is clear to see in its architecture. For more than 400 years, it was central to historic border wars between England and Scotland, one of the most significant events being the Sack of Berwick in 1296. Due to its strategic location and trading significance, the town was heavily fortified, with much of this architecture remaining evident today. The town is bordered by Elizabethan ‘trace italienne’ fortified walls, which Waxwing backs onto, and is known for its three iconic bridges that cross the River Tweed.

Berwick is also known for its artistic traditions, with an array of resident artists and illustrators – including this home’s current owner. This is a result of its beauty, its proximity to Edinburgh, its exceptional light and the abundance of light-filled, architecturally significant homes. Renowned artist L. S. Lowry spent a great deal of time in Berwick and painted many scenes here while staying at the Castle Hotel each summer.