Tod Hanson has transformed some of the rooms in his home into extraordinary pieces of art, using their intrinsic architecture to inform the optics. As the house comes on the market, Tod talked to Inigo about the workings behind his wonders 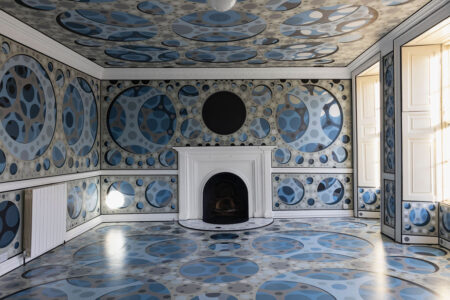 Waxwing, Tod Hanson’s home in Berwick-upon-Tweed, wasn’t always known thus. In fact, when the artist bought the place, which is currently for sale with Inigo, it was called the Merchant’s House, its name ­– and the doorway that led straight up on to the town wall behind ­– a clue to the horizon-scanning habits of the man for whom it was built, in c1750. But Tod, who grew up in a Georgian house in Islington, says he was less interested in the history of the building than the structure itself as an example of its time. “I didn’t want its story to affect what I was going to do with it,” he explains. “I was interested in 18th-century form, composition and the Georgians’ idea of modernity, more than anything.”

What he did, or at least what he started to do, is on show here. “I wanted to try out some ideas,” Tod says modestly, of the astonishing installation-like artworks he has created in its upper rooms. While some of the spaces in the house remain simply for living, Tod’s mind-bending optical wonders are “separate showcases”, empty rooms occasionally open to the public.

His intention was to keep going, to transform the whole house (“it’s all planned”), but, for various reasons, London began to beckon and Tod has put the house up for sale. He says he’s not averse to carrying on, however, should someone want him to complete Waxwing. And if not? “As an artist, particularly one who’s done a lot of temporary pieces, I’m used to saying goodbye to things,” he says pragmatically. And regardless, their impact will endure. “These artworks will definitely inform my future projects.”

“As a result of where I grew up, I’ve always been very familiar with 18th-century architecture. When I started thinking about this project, I knew a Georgian house was what I wanted. I also knew I wanted a really good one, which was what brought me to Berwick. At first, it was just about trying out some ideas. This house has such beautiful rooms, some of them with their original panelling. The feeling here is amazing, the light is wonderful; they felt perfect for what I wanted to explore.

“My work is usually responsive to place.  I do public commissions and gallery installations and I’m currently commissioned to draw Marchmont House, a Palladian mansion in Scotland, but this was the first time I’d done something in my own home!

“The blue room is on the first floor. The idea is that it feels like you’re stepping into the clouds. There’s a sort of stratospheric air to it. But the forms in there all come from the room itself, specifically the fire surround and the oculus window that’s on the right-hand side as you walk in; they’ve informed the whole geometry of the space. In winter, something particularly special happens in here: a beam of sunlight shines through from the oculus and across to the hearth, where it sits, like a glowing orb, in the grate. That also had a bearing on the more celestial, cosmic aspects of the room, as it’s just incredible. That window was only added in the 1980s, I think; I often wonder if it’s a fluke that that happens, or whether it was meticulously planned by the architect.

“The mauve room is on the floor above. I started to really explore the panelling in here, which was original, and then from it created this runaway structure that flows around the room. It’s like the panelling has taken off and is continuing this marching passage across the space. It looks sort of layered, which is what happens when the grids slide across the boundaries between wall and ceiling or floor; there comes a point when you can either make the frames connect or let them run underneath each other. I liked the idea of threading them, weaving the lines over and under one another.

“The other room on this floor was going to have a grid too, but a more horizontal one, again using forms that are intrinsic to the space. I love the idea of the house setting the pace. That room was going to be grey, which links to the name: waxwings are beautiful birds that fly in from northern Europe for the winter. As well as having some incredibly colourful feathers, they’ve got lovely grey plumage. I wanted a new name for the house, a modern name, one that didn’t tell too much of the house’s story beyond its architecture.

“Creating Waxwing has been a funny experience. I spend a lot of time in London and I was painting these rooms around other projects, so it’s felt rather multi-dimensional. I suppose life in a house is like that anyway, even without turning it into an artwork. But then I started inviting the public in, so it became even stranger.

“The reception was very interesting, though. I put a sign on the pavement with an arrow and it just said: ‘Free exhibition’. People came in, I gave them a pair of overshoes and they would enter the rooms and just smile. Or laugh. I think it was because there was no forewarning. It just wasn’t what they expected to see in a Georgian house. I had 300 people coming in over three days, without any advertising. Just word of mouth and the arrow!

“What I liked was that people weren’t coming thinking: ‘OK. I’m about to see some art’, with all the preconceptions that people have of ‘art’ – whether they know about it, or like it, or not. They simply walked in and saw it. It was special to watch. Quite often they couldn’t work out if I lived here, if I used the rooms or not. But looking round they began to become naturalised these strange environments, because there are still shutters and windows and fireplaces – recognisable features. And in fact, in the blue room for instance, the colours aren’t as shocking as they might seem. I’ve got samples of the first three wallpapers that were hung in that room in the 18th century, the first having a bright-pink plaid pattern. It’s really quite modern, quite Pop. It must have been like living in a picnic hamper.

“The rest of the house hasn’t been done yet. I’d like to do it, but I have to sell. When I bought the place, it was probably one of the last few beautiful Georgian houses in Berwick that hadn’t been fixed up, which was why it was perfect. My dream is that someone buys this house and I can complete the project, though of course I accept that people might want to paint over the rooms I’ve done. I understand; I’m used to losing pieces of work. It’s not entirely troubling. They exist as photographs. They’ll exist in my memory.”