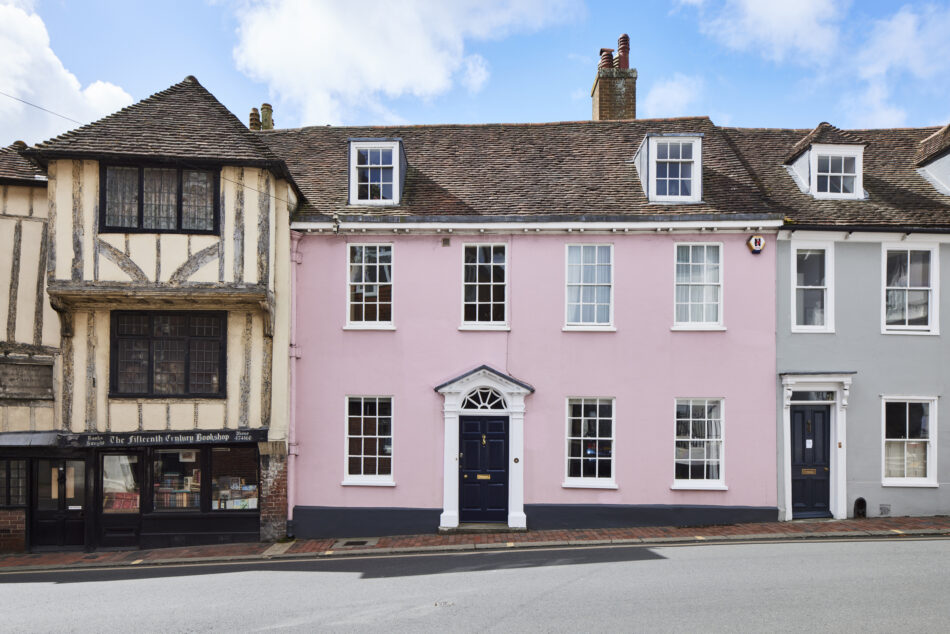 The Pink House is a wonderful, 18th-century Grade II-listed house, positioned in the centre of Lewes. It has expansive views that extend over the private walled gardens, to St. John the Baptist Church beyond and the South Downs on the horizon. Extending over 2,700 sq ft, the house contains five bedrooms, a large dining room to the front and a kitchen that opens onto a south-facing, sun-drenched terrace.

The Pink House is thought to date back to 1740, although the cellars are likely to be considerably older (probably from the 1600s). Records suggest that the house has been occupied since 1602, when the original structure was built, before it was replaced by a “new” house in 1740. It is bookended by the beautiful Fifteenth Century Bookshop and a house from a similar period, which has many of the same features as The Pink House itself.

The current owners have undertaken a sensitive restoration, focussing on the home’s unique proportions and the plethora of original details that remain intact. For example, many of the rooms have beautiful fireplaces of varying periods and designs – some early Georgian, some later into the Regency period – that hint at the home’s evolution over the centuries. The owners enacted a gentle revival, slowly uncovering features already present, repairing what needed repair, and all the while ensuring the home’s suitability for modern life.

The front door opens into a wide hallway with high ceilings, half-panelled walls and original doors. To the right is a formal dining room, with its original panelling, wide floorboards, and fireplace with an ornate marble surround. On the opposite side of the corridor is a deep blue-painted room with a wall of bookshelves, which the current owners use as a study.

The hallway leads past a guest WC to the rear, through an arched, glazed doorway and into the light-filled kitchen. A further glazed door, flanked by two large sash windows, opens onto a terrace that leads into the garden. The south-facing kitchen is wonderfully bright throughout the day and is comprised of green-painted cabinetry, wooden worktops and a white-tiled splashback. Porcelain tiles run underfoot; a low door leads into the brick-floored cellars below, currently used as storage space. In the cellar are curious brick and stone archways, now filled in, which are rumoured to have once led to underground tunnels with passageways to and from Lewes Castle.

A hatch in the wall reveals views of the sitting room, a cosy room partially painted in a rich, navy blue. This provides a beautiful contrast to the white kitchen and is home to a striking inglenook, where witches’ marks (used to protect the home’s inhabitants from evil spirits) have been etched into the oak lintel, now fitted with a warming stove.

A grand staircase leads to the first floor, home to three sweeping double bedrooms and a large bathroom. The main bedroom is a breath-taking space with a large bay window – comprised of three tall sash windows – which frames incredible views over Lewes and the surrounding Area of Outstanding Natural Beauty. The room has been painted a muted green, lending it a sense of tranquillity, and is completed by another marble and cast-iron fireplace. In the bathroom, a painted mural occupies an alcove above the bath; a vestige from the previous owner, who commissioned it from a local artist.

In the top floor eaves are two further bedrooms, a kitchenette and a second bathroom, from which you can glimpse the castle. In the smaller of the two bedrooms is a secret door which, Narnia-like, leads into part of the attic and out again through the back of a cupboard. In addition, there is a substantial storage area, which has the potential to be amalgamated into the rest of the top floor (subject to the usual permissions) to create a stunning main suite. Beautiful, original wide oak boards have been exposed here and restored.

The stepped and fully-walled garden – in excess of 32m long and over 12m wide on the lower level – is one of the largest in Lewes’ town centre. There is a sun terrace near the house and brick steps that lead down to the lawn. The owners undertook copious amounts of work in the garden, to reveal the beautiful old flint and brick walls surrounding it. At the southern end, the wall is only a few feet high, preserving and framing the spectacular views of the church and South Downs from both the upper and lower gardens. Along one wall is an ancient Wisteria, and a variety of roses, clematis, jasmine and honeysuckle thrive in the beautifully planted borders surrounding the space. There is also a prolific soft fruits bed containing raspberries, gooseberries, blackberries and rhubarb.

Lewes is nestled in The South Downs National Park with its many beautiful walks across the surrounding landscape, including The South Downs Way, which takes in a spectacular coastal route over the Seven Sisters to Beachy Head, leading all the way to the sea. There are numerous beaches, including Birling Gap, Cuckmere Haven, Fairlight Glen and Seaford, as well as the popular beaches of Brighton and Camber Sands.

There is much to do in Lewes itself, which is home to plenty of independent shops, antiquarian bookshops – including the neighbour of The Pink House – and a number of antique markets. There are numerous cafes, such as Patisserie Lewes and Flint Owl Bakery, and galleries including The Star Brewery Gallery and The Needlemakers Craft Centre. There are also many independent businesses that stock work by local craftspeople. Glyndebourne Opera House is only a few miles away, and special coaches are laid on at Lewes Station during the season. There is a new cinema and art complex, The Depot, which shows a variety of mainstream and arthouse movies.

Brighton is also close by – only 10 minutes by train – with its numerous restaurants, shops and cafes.

Lewes is known for its famous Bonfire Night which it hosts annually on November 5th. It is a spectacle like no other; with a large costumed parade comprised of various Bonfire societies that wind their way through the town to their separate bonfires; a number of firework displays can easily be enjoyed from many of the upper windows in The Pink House.

Lewes railway station has direct services to London in around 63 minutes and Clapham Junction in under an hour. There are also direct services to Gatwick Airport that take approximately 31 minutes. Lewes is on the A27, which connects with the A23 London to Brighton Road.

The Grade II-listed Pink House, largely built in 1740, has had many lives and uses over the years. The current owners have a list of previous occupants, taken from Colin Brent’s exhaustive books: Georgian Lewes and Pre-Georgian Lewes. In 1674, it was documented that a woman called Ann Luxford kept an alehouse, ‘The Boars Head’, in the house, which seemingly remained until its closure in 1753. It then seemed to be used almost exclusively residentially, until shortly after the war when the ground floor functioned as an antique shop; a listed building application was made (and granted) to hang a sign on the front of the house advertising its name and wares.

Lewes is steeped in history, with accounts going back to the Saxons when it was founded as a village around the 6th century. By the 10th century, it was a small market town with two mints, showing it was a place of some importance. The Normans built Lewes Castle just after 1066; the castle was first built of wood but rebuilt in stone and flint later that century. The remains still stand to this day, towering high above the town centre, and are just minutes from the Pink House. The town itself is very beautiful; the main High Street has lots of little roads and alleyways (known as Twittens) that run off it, with incredible vistas at the end of each one over the town’s charming period houses, and beyond to the rolling Downs in the distance.

The Bloomsbury Group were constant visitors to nearby Charleston Farmhouse, where the artist Vanessa Bell, her husband Clive and their fluctuating  household of friends and lovers lived and worked, and which is now open to the public. Virginia Woolf and her husband Leonard lived close by at Monk’s House in Rodmell, and Virginia would often walk between the two, an airy, exhilarating six-mile trip across the beautiful, chalky landscape.