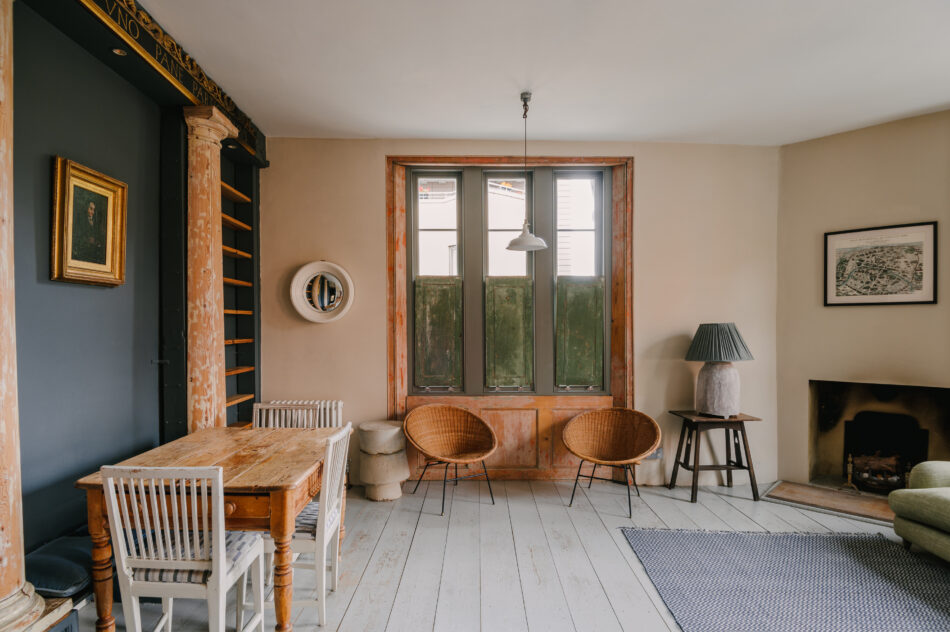 This wonderful apartment lies on the first floor of a former Victorian public house in the heart of London’s East End. The original pub, and the apartment above, sit upon Cable Street, one of London’s most notable historic thoroughfares. Beautifully designed to an exacting standard, the 700 sq ft apartment has two bedrooms and an expansive living area with large quadripartite sash windows. The design evokes and sensitively mirrors the historic nature of the building and its important location, set within the conservation area and shadow of Hawksmoor’s ecclesiastical Baroque masterpiece, St George-in-the-East.

The first documentary evidence of the area dates to 1223, when it was mainly rural with open fields, with the apartment’s building occupying an area known as Gun Field. Cable Street itself started as a straight path along which hemp ropes were twisted into ships’ cables; these supplied the many ships that would anchor in the nearby Pool of London, between London Bridge, Wapping and Rotherhithe. More recent historical connections include the famous Battle of Cable Street, which was fought on the street in 1936.

The area is also home to a somewhat macabre, yet fascinating piece of London’s history. In 1886, the body of the then-famous local Ratcliffe murder, which took place in 1811, was discovered at the crossroads directly outside the building. Local legend has it the pub’s landlord kept the skull behind the bar as a souvenir. Indeed, a public house has existed on the site long before the current building, which opened in 1850 as the Crown and Dolphin, was completed. During the late 19th century it was the centre point of the notorious Victorian red-light district. It is now the final set piece of one of the last remaining sections of Georgian and Victorian terraced housing on Cable Street, and indeed in greater Shadwell, an area veritably steeped in history.

The front door opens to an intimate and atmospheric hallway. The living room wraps around the front of the plan, flooded with light through four soaring sash windows, sensitively overhauled to incorporate modern insulated double-glazed timber units and surrounded by original panelled box casements and shutters. Pitch pine floors have been carefully restored, with even the single-slotted brass screws made to align with the grain of the wood, while light switches are all replica porcelain, mounted on reclaimed oak blocks for historical accuracy. Column radiators feature, with a wonderful open-hearth fire positioned centrally in the seating area. Walls and floors have been washed in the pigment-rich colours of Farrow & Ball throughout the apartment.

The kitchen lies to one side of the living room. This is home to a majestic Victorian shop counter, originally from an old pottery and bearing the beautiful patina of years of use. A ceramic butler sink and brass bibcock kitchen taps have been seamlessly incorporated, with appliances and storage underneath. A beautiful, grand oculus draws light from the room into the hallway. The most noteworthy feature of the living and dining area is two handsome reclaimed Georgian recessed Doric half-columns, surmounted by the gilded Latin inscription ‘Omnes Qvi De Vno Pane Participamvs’ – ‘all who share the bread’.

The main bedroom lies at the rear of the plan, accessed via a hallway lined with bookcases set into an old sash window. The room features a wonderful, curtained box bed, with a carefully considered niche for lighting, perfect for nighttime reading. A decorative Victorian chimneypiece provides a focal point to the room, inset with a rounded mirror, while a walk-in wardrobe is positioned neatly to the rear. The door case was cleverly widened to enhance the feeling of space; the bedroom becomes part of the hallway and vice versa. The second bedroom is beautifully carpeted; currently used as a charming study, it easily accommodates a double bed if required.

The adjacent bathroom is replete with exceptional historic details. Walls are half-panelled in a butt & bead design, while an antique cast-iron bath incorporates handsome brassware, including a handheld shower. The enamel sink is from Labour and Wait, and the WC sits within an oak-encased thunderbox design with an original high-level cistern.

The apartment is exceptionally well-positioned in the heart of Shadwell and equidistant from Whitechapel, Wapping and the River Thames. Favoured local amenities and attractions include Spitalfields Market and Brick Lane, riverside walks along the Thames, the Curzon cinema at Goodman’s Field and Wilton’s – London’s oldest surviving music hall – for drinks and special events. The Prospect of Whitby and Captain Kidd pubs in Wapping are recommended for waterside drinks – both with outdoor terraces – and the Turks Head suggested for breakfast on lazy weekend mornings.

St Katherine’s Dock offers a further selection of good restaurants and bars, including local favourite coffee shop White Mulberries, plus a large branch of Waitrose. Wonderful parks are also located nearby, with the ancient Wapping Woods and King Edward IV Park (with outdoor tennis courts) both a short walk away.

Transport links are excellent. Shadwell station is a one-minute walk from the apartment, with convenient links via the East London Line, connecting south-east and north London. Additionally, the DLR from Shadwell has fast connections to Canary Wharf to the east and the City to the west. The Elizabeth Line at Whitechapel will open in 2022 for the new Crossrail, connecting to Bond Street in 10 minutes and Heathrow Airport in 38 minutes. Additionally, Cycle Superhighway 3 runs directly along Cable Street, connecting central London and Canary Wharf via a segregated cycle-only pathway along its entire length.

Please note that all areas, measurements and distances given in these particulars are approximate and rounded. The text, photographs and floor plans are for general guidance only. Inigo has not tested any services, appliances or specific fittings — prospective purchasers are advised to inspect the property themselves. All fixtures, fittings and furniture not specifically itemised within these particulars are deemed removable by the vendor.
Cable Street — London E1
Interested? Let’s talk