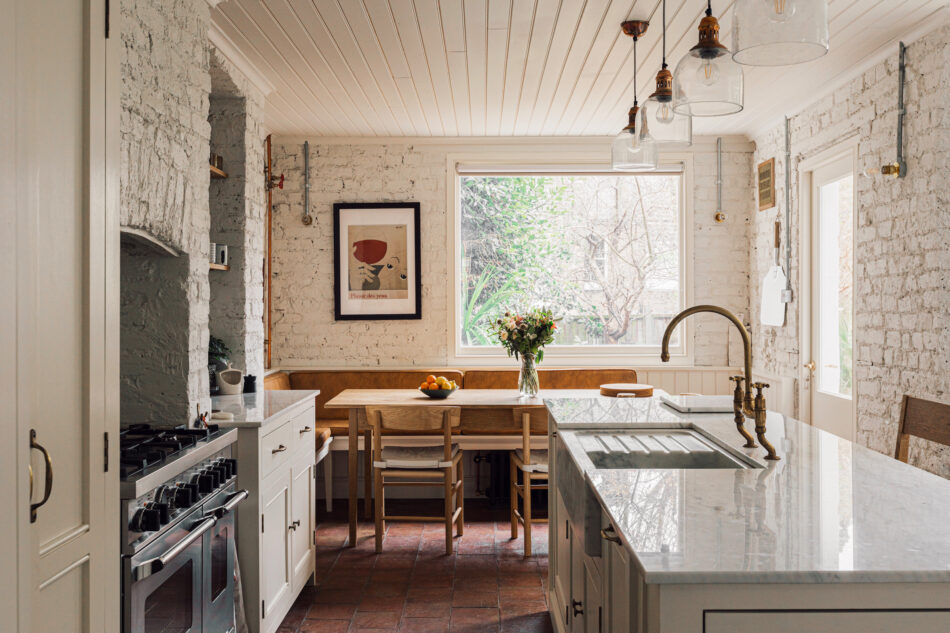 This wonderfully crafted house is located on Brixton’s Arodene Road. Extending over 1,865 sq ft and encompassing five bedrooms and four bathrooms, the house has been painstakingly and completely renovated under the current ownership to an exceptionally high standard to create a refined and elegant home, benefiting from a peaceful, private, garden.

The house was constructed circa 1900 during the expansive development of the area following the coming of the railways. Over time, the current owners, an interior designer and a fine craftsman, have extended and renovated the home. Modern interventions, such as the marble-topped and raw brass kitchen, have been sensitively combined with a selection of original features; such as decorative cornicing, ornamental door surrounds and the restoration and replacement (where missing) of fireplaces.

Entry is through a front garden, bordered by a large hedge that provides privacy. The front door has been finished in a warm yellow hue and has period correct, highly attractive, stained glass. A curved stucco porch is framed by whimsical, foliated, composite columns to each side.

The front door opens into a wide hallway, featuring original, polychromatic, Minton floor tiles. A double drawing room and living room lie to the right; a fantastically bright space, this is illuminated by both a large bay window to the front and French doors that open onto the garden at the rear.

The hall continues past a downstairs WC and access to the cellar housing utilities. At the rear of the house is a voluminous open-plan space with the kitchen and built-in dining area beyond, beautifully illustrative of the marriage between old and new found throughout the house. The tactful decision was made not to build into the side return, maintaining the original bay window and retaining far more of the home’s original character. The kitchen employs a refined palette of materials including cream-painted panelled cabinetry, raw brass hardware and Carrara marble countertop and sink; the owners have painstakingly exposed the original brick and whitewashed the walls, while terracotta tiles run underfoot. A large built-in pantry occupies the recess next to the chimney.

The main bedroom is on the first floor and extends across the full width of the house. It is painted a serene, warm pinkish-white and flooded with light from another large bay window. The chimney breast, stripped back to brick, intertwines a refined palette and sensibility with rustic elements. Adjacent to the main bedroom is an opulent, Edwardian-inspired bathroom, where fine wood panelling painted in Little Greene Lamp-Black, brilliantly contrasts with the brass hardware. An early 19th-century console table has been repurposed with a Carrara marble top to create a beautiful sink counter. The use of Carrara marble continues in the shower, and a caste-iron, bateau-bath with views over the rear garden makes the perfect space for long Sunday soaks .

To the rear, another generously proportioned bedroom overlooks the garden. Utterly tranquil, the bedroom also has a finely appointed shower room adjacent, also with panelling and Arabescato marble. A similarly proportioned bedroom and bathroom lie in the same portion of the plan on the floor above; more contemporary in character, a coloured terrazzo floor, ochre marble slabs and dark brown tiling give the space a mid-century atmosphere.

Ascent via a half-flight of stairs leads to two further bedrooms, one of which also overlooks the garden with views to the city beyond, and benefits from built-in bedside lighting and a reclaimed Victorian fireplace. The attic bedroom lies beyond this and is flooded with light by four large Velux windows. Again, a tastefully restrained palette has been utilised, contrasting with the exposed brickwork and walnut joinery. This bedroom benefits from its own en-suite shower room with hand-cut tiles. This top floor is notable for its unusually tall ceiling heights and the volume this provides.

The rear garden is a tranquil, secluded spot framed by flowerbeds and mature trees. The centre of the garden has been paved in a fan motif, adding dynamism to the space and reinforcing the painstaking attention to detail and craftsmanship throughout the house.

The surrounding area is brilliantly leafy and verdant with an array of green spaces nearby; Rush Common is a stone’s throw from the house whilst Brockwell park, with its fantastic Art Deco lido is a 5 minutes-walk and Belair Park, Dulwich Park and Dulwich Woods, which provide access to the Green Chain Walk, are slightly further afield.

The peaceful Arodene Road is a short walk from the plethora of amenities Brixton has to offer. Brixton was the pinnacle of modernity during the latter years of the 19th century, with the first purpose-built department store (Bon Marche) in the United Kingdom opening in 1877 and the first electrically-lit market street, aptly named ‘Electric Avenue’, opening in the 1880s; the street further rose to cultural prominence thanks to the 1983 hit single by Eddy Grant.

There are a variety of transport connections within easy reach of Arodene Road. Buses run across the city from Brixton Hill, while the Victoria Line at Brixton Underground offers speedy connections to central London, with trains running every two minutes, reaching Oxford Circus in 14 minutes.

Please note that all areas, measurements and distances given in these particulars are approximate and rounded. The text, photographs and floor plans are for general guidance only. Inigo has not tested any services, appliances or specific fittings — prospective purchasers are advised to inspect the property themselves. All fixtures, fittings and furniture not specifically itemised within these particulars are deemed removable by the vendor.
Arodene Road — London, SW2
Interested? Let’s talk