Opening at Charleston, Tunji Adeniyi-Jones's first solo show has been designed to be seen alongside works by Duncan Grant. It may not, at first glance, be the most congruous of curatorial combinations – but perhaps that’s the point 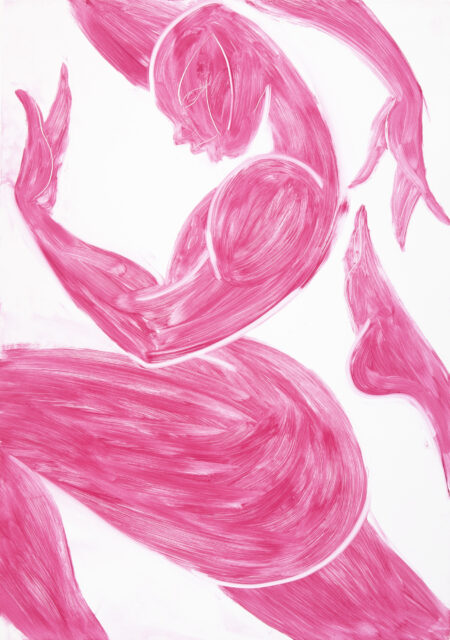 When looking at two artists side by side, the temptation is always to draw out the parallels. It’s natural, of course, to want to find the similarities that make a comparison legible. Take Tunji Adeniyi-Jones, for instance, who joined White Cube’s roster in August 2021, and Bloomsbury’s Duncan Grant, whose solo shows cleverly coincide at Charleston this September. What links these artists, working a century apart? The shows are both firsts, for a start: Adeniyi-Jones’s inaugural solo exhibition sits alongside a ground-breaking recreation in its entirety of Grant’s in 1920. Viewers will recognise that the painters speak a shared language too: bodies, lithe and dancing; expressive colour; a lyrical sense of line. But beyond that common visual tongue, it gets a little nebulous.

In fact, Adeniyi-Jones himself feels that to look for the nexus is to miss the point somewhat; for him, it’s what he calls the “tension” between the artists that makes things interesting. “We have very different points of reference,” he explains over Zoom from his studio in New York, where he’s been putting the final touches to the works for Astral Reflections, which opens at the Sussex farmhouse on 18 September. Rather, it’s the contexts that help the shows chime. Despite there being “a space, a pocket” in between the two men, both shows reflect “a young artist at a particular point in their career, trying to discover themselves, to understand where they’re from and what they’re about.”

Identity is a recurring theme in Adeniyi-Jones’s work. Born in London in 1992, the half-Nigerian artist, now living in Brooklyn after studying for a master’s degree at Yale School of Art, has always used the human form – in particular the Black body – to explore that theme. He uses imagery of sinewy strong limbs and torsos “to speak to my Nigerian heritage,” he explains. It’s interesting now, he says, pitching his work against Grant’s, how African customs and culture played a part in the latter’s more abstract works too. Grant, who had almost certainly read Roger Fry’s writings on African art, studied in Paris in 1907, where he met Picasso and Matisse, with whom he shared an interest in African sculpture.

Lately, and in particular for this show, Adeniyi-Jones has also been using painting to explore his Britishness. While studying in the States, he realised his understanding of the history of figurative art was almost entirely European. His degree at Yale opened his eyes to a wealth of Black figurative art he had never really encountered before. Furthermore, he was now outside of the UK, looking in. It afforded him the chance to look at his British identity in a more distinct way, he says. “It suddenly became clear that there wasn’t just one way to talk about the things I’d been talking about.” Since living in America, Adeniyi-Jones says, “I have felt like my ability to contribute back home has been a lot more difficult,” in part as a result of having worked with such different cultural references in the States. “I’ve been cutting my teeth with the history here and in a way I’ve ended up contributing to it.”

A consequence of this disassociation, much in evidence in the upcoming show, is Adeniyi-Jones’s tendency towards artistic ambiguity over specificity. Where in earlier works he was painting “West African-inspired figures in a space that was recognisably Nigerian”, now his pictures are altogether less definite. With Astral Reflections, “it’s very clear that you’re looking at an African body in an African form, but aside from that, they could be anywhere. The space becomes very abstract.” He hopes that while it’s clear that “the works are still coming from a certain place, where they’re going is less defined… They’re more accessible,” he says. “Just because they’re not your specific cultural references, it doesn’t mean that they can’t speak to you.” It’s a typically clever and subtly subversive idea from Adeniyi-Jones: that in being more elusive, his pictures simultaneously become more relatable.

Adeniyi-Jones feels, in many ways, that he was already creating the works for this show before he even knew it was going to happen. “I was already thinking about expanding the figures in my pictorial space and about making them more expressive, more fluid, more dynamic,” he says. “There was definitely a process happening and that process just seemed to lend itself to what Charleston were thinking about for the show… They found me at the right moment.” And while it’s not as though this body of work has been inspired by Duncan Grant, Adeniyi-Jones is certainly an admirer of the Bloomsbury artist, now more than ever – of his visual storytelling and “heavy” image-making.

Seeing his own work in the context of other figurative artists has, in the past, been problematic for Adeniyi-Jones. “I really love Jenny Saville, for example,” he says, “but I know I’m never going to paint like her… And it’s OK, that tension, because it shows I’m learning, I’m growing. That’s interesting.” There’s that word again: tension. “It’s not problematic,” he says, this time of the relationship between his work and Grant’s. He’s right, it’s not. Instead it thrums, positively sings, just like those hot-hued and limber leaping bodies he puts on paper. And he’s right – it’s certainly interesting.