Katharine has been dealing in fabrics, fragments and the occasional costume for more than 30 years. Here, we tap her for top textile tips, asking her what to look for on your next flea-market jaunt 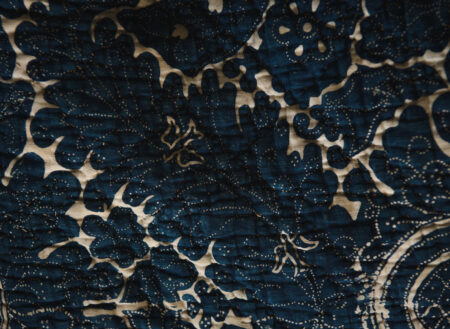 London’s Harrow Road is an ancient thoroughfare running west from Paddington. It seethes and simmers with life, a snaking symbol of this part of town in all its teeming, tenacious glory. Wending its way into the NW10 postcode area, second-hand furniture stores and shops selling Moroccan wares give way to pubs and Portuguese restaurants. It is a dynamic place, diverse and inescapably urban. Stubbornly so.

This makes Katharine Pole’s workroom, where she keeps her collected antique textiles, all the more magical. On a side street running off the main road, her Victorian terraced house is unremarkable if lovely. Standing outside gives no clue to the cache of treasures sequestered in what was once an upstairs bedroom.

To step inside this space is to enter Aladdin’s cave. In here, we’re a world away from the grit and grime of the Harrow Road. Piles of quilts burst, almost alive, from a grand tester bed with striped bourette-silk hangings that came from a nunnery (“Lucky nuns,” muses Katharine); cabinets are stuffed with pressed linen; baskets and bowls overflow with tangled passementerie and folded French aprons. Does she know where everything is? “Oh yes!” Beat. “Almost.”

Katharine has been collecting and selling textiles for three decades. She came to them as a maker. Having been given a grant by the Crafts Council in the late 1970s to set up a dying and screenprinting workshop in Clerkenwell, she later found her attention monopolised by older indigos, particularly 19th-century French bleus de travail, or workwear. She’s since branched out – as these photos attest – but her knack for finding beauty in the everyday hasn’t abated. While she admits to a fondness for fine 18th-century fancies, Katharine is no quality snob. Out of the jumble she extricates a French girl’s skirt to show us, patchworked not just for prettiness but out of poverty. “It’s so poignant and so beautiful,” she says, gently worrying a corner with her finger. “Though I do prefer happier things.”

Busy preparing for this week’s Decorative Fair in Battersea, Katharine takes a moment to tell us about her trade.

“Where to start? It’s the printing, it’s the cloth, it’s the colours, it’s the flaws. Above all it’s the handmade-ness in a world where so little is handmade. There’s nothing quite like antique textiles. And while I’m particularly drawn to French and English fabrics, especially printed ones, there is a worldliness to them in their reference points that appeals to me: the indiennes that influenced French patterns, for instance.”

What’s been your dream discovery?

“I’m always happy to see an indigo, particularly the blue-and-white paste-resist ones from France, which would have been used for bed hangings and were quilted for added warmth.

“I have lots, as you can see, some of which have been cut up, which is quite common. There are two patterns you’re likely to find: toile de Nîmes and toile de Rouen (which you might recognise as having been copied by Lewis & Wood). But I have been lucky enough to unearth a few examples with birds on, a variation that you hardly ever come across. I found one about 25 years ago and another – the only one since – recently; it’s so beautiful that I don’t think I’ll ever be able to part with it.

“I once found an entire woman’s dress, a robe à la Française en indienne. It was made of cotton, which in theory is less valuable as a material, but also made it all the more special for having survived. Of course people save their silk frocks, but the cotton ones tend to disappear over time. The everydayness of it was touching.”

Where’s a good place for an amateur to start?

“Markets. They’ll help you work out what you like. There is nothing like going to a fair or a flea and having a rummage, touching things with your hands. If you can make it to the markets in the south of France, the déballages or trade fairs there are brilliant, as are the weekend markets. Even though the internet has made it much easier to buy things – and I sell quite a lot online – nothing, for me, replaces the thrill of looking for things in real life.

What do you look for?

“This isn’t necessarily helpful – I’m sorry! – but I’m looking for a moment. It’s quite instinctive, almost visceral, but as soon as you feel it you know. But I’m always on the hunt for oldness. And hoping that the really good things will percolate up to the top of the pile for me… And while I do use my many reference books for research, there’s no better way to learn about antique textiles than by looking at and holding them.

“I don’t mind damage if something is beautiful enough – useful for the amateur collector to bear in mind – but I don’t like dinginess. I don’t tend to mend things, though I would make a cushion from a fragment, for instance. I recently found some 18th-century Indian chintz that had made its way to France where it had been laid on to a piece of linen. It’s a bit faded and battered and I think a purist would remount it, but I’m happy to sell it as it is. I like how it’s aged and weathered. The story is part of the appeal.”

How do you care for them?

“The more precious your things are, the more tissue paper you need. And I’m not a tissue-paper person! There is a place for imperfect things that bear the marks of their journey through time, just as there is a place for the perfectly preserved. That said, the sun can be tricky and the moths are monsters. I spray to deter them but I generally don’t wash things, except the linen sheets, which are hardy; I know how they’ll respond. With other textiles, particularly more fragile ones, you have no idea how what will happen if you get them wet or they come into contact with modern chemicals. It’s not worth the risk.”

Katharine will be exhibiting at the Decorative Fair, which runs at Evolution London in Battersea Park, 24-29 January