A Room of One’s Own: treasures and trinkets in Kentaro Poteliakhoff’s floribunda wonder of a sitting room

The owner of interior shop Rooms has crammed his ‘snug’ sitting room in east London with everything from a cache of green ephemera to shining folded crisp packets (they’re pretty – we promise). Inigo marvels at his magpie eye 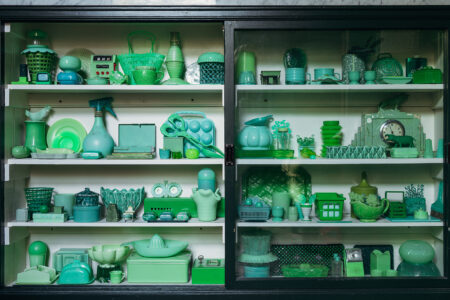 “It’s a bit of a squash in here.” Kentaro Poteliakhoff is standing in the downstairs sitting room of his house in Clapton, east London. It isn’t that much wider in here than his own wingspan – though admittedly, Kentaro is hardly diminutive. “It’s a squash in a nice way!” he adds, laughing. “That’s why it’s called the snug.”

The size of the room aside, he’s packed a lot in here. A lot. One gets the sense that even if Kentaro, who runs destination interior shop Rooms, wanted to stop amassing things, he simply couldn’t. He’s like a magpie, drawn to the pretty, shiny and desirable as much as the overlooked or unfashionable. It began in childhood, when the dolls’-house-obsessed Kentaro began redoing the schemes of his own at home in Muswell Hill. He’d dream of his next pilgrimage to Kristin Baybars’ shop in Gospel Oak, where he’d spend every penny he’d saved on her magical miniatures – chandeliers, chairs, dressers. (You can only imagine his delight, then, when Marks & Spencer began selling micro-scale groceries two years ago.) An antique addiction followed in his teens and he hasn’t stopped since.

‘Sitting room’ seems too conventional a description of this space (which is sometimes called the Floral Room, for obvious reasons). It’s a veritable Wunderkammer, a place to show off his collections to friends over a drink, a room to quietly ponder his arrangements over a quiet cup of coffee. It used to be, by his own admission, “hoarder hell” in here – part storage space for Rooms, part builder’s workroom, part car-boot antechamber. Now – wallpapered, arranged, considered – it’s a showpiece of the things he loves: “ridiculously” ornate Rococo furniture; an array of green tchotchkes; a glinting bundle of crisp packets (yes, you read that right). It’s kooky. It’s kitsch. It’s very, very Kentaro.

“It all started with the wallpaper. I had a cutting of Anna French’s ‘Bouquet’ in a scrapbook from the time I was working for interior designer Camilla Guinness. I always returned to it, thinking: ‘One day I’ll put that up.’ This was the place! I think somehow, even though it’s quite a busy pattern, it makes the room feel bigger – though the high ceilings help. I like the clash with the curtains too, which were a real find – I came across them in a charity shop. They’re made from a Designers Guild fabric with coloured flowers on a grey background. It’s a great mismatch.

“I’ve built the decoration up over time – and it’s changed quite a lot too. Originally it had a piece of furniture that came from a car mechanic’s workshop, made of grey powder-coated steel. It was really industrial-looking, with loads of labelled drawers that I used to store the miniature antiques and bits of ironmongery that I collect. I wanted it to work so much, but in the end, I had to accept it wasn’t right in here. The Victorian extravagance of the rest of the room needed something else, hence the Rococo glass-fronted chiffonier.

“Since it’s really a display cabinet, it needed something to display. That’s where the crisp packets came in. My mum is Japanese and she’s always done origami, but she also uses the same principles to fold plastic bags, so they can be stored tidily. I never really got on with paper cranes, I thought I’d do crisp packets. You can’t recycle them, so it’s a good way to do something with them – especially since I get through so many. I don’t drink, I don’t smoke – eating crisps is my vice. They also happen to make brilliant Christmas tree decorations, stuck on the ends of tree branches.

“The furniture does change around a bit, but I’m pretty happy with the way it is right now. When I first started decorating this room, I really thought I wanted to keep the walls bare, just to admire the paper. And now it’s covered with things. It’s funny how that happens. One picture that I think works particularly well here is the portrait of the dining room hanging above the sofa. Lots of people think it’s funny that I’ve put it in here, rather than in the dining room itself, but why should I have it in there? You don’t need to see the room twice at the same time! A friend, Daniel Quirke, did it for me over lockdown and it was made with such love.

“When I first opened Rooms in 2014, I was only really buying things I loved, things I would want in my own home. But I soon realised two things: firstly, that it made it harder to let go of stuff; and secondly, that a lot of the things I’m particularly fond of – mahogany, Victorian bits – take longer to shift. Now my focus in the shop has altered. I still love the things I sell, but I wouldn’t necessarily own them. There’s such an appetite for the ’90s and ’00s at the moment, for instance. It’s not what I’d have at home, but I like it and appreciate the look.

“The beauty of having your own shop is that you can be custodian of these things for just a short time. Although I admit, sometimes it’s forever… There have been times when something in the shop hasn’t sold and it’s meandered its way back here, or there have been items that I simply couldn’t part with. My favourite thing is when a friend buys something I’m fond of – then I get to carry on seeing it.

“Anyone looking around my house – and this room in particular – will know I’ve got a thing for green. I find it such a soothing hue that I’ve painted my bedroom in it. I particularly like the ’30s Bakelite green of the pieces in my green painted sideboard. I’ve collected so much of that now it’s almost an obsession. It doesn’t have to be expensive – quite the opposite in fact; I’ve got masses of green Tupperware, eggcups, lots of plastic things. In fact, the things in that cupboard are probably 70 per cent plastic. Lots of them are Japanese; I can think of numerous times I’ve gone into shops in Japan and asked to buy something that wasn’t for sale, like an old pen pot. People have been horrified at the prospect of me wanting to buy some dusty bit of rubbish from their cash desk, but to me it’s special. It’s wonderful that it’s been used and loved and enjoyed, even if it’s now a bit tired. After all, not everyone can collect Fabergé eggs.”