A Private View: three centuries’ worth of stories in a Georgian flat in Greenwich

As his home comes on the market, Jason Carey explains how the illustrious tenants and prior lives of Point House, one of the most storied addresses in Greenwich, shaped his flat on its top floor 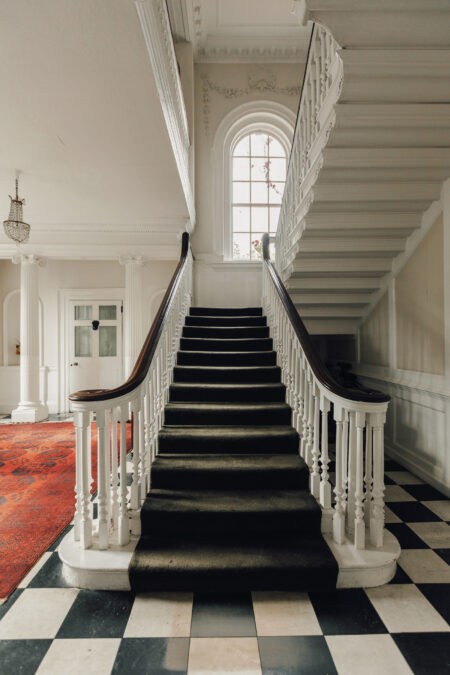 Perched on top of one of the tallest hills in Greenwich, south-east London, is Point House. Currently on the market with Inigo, it has sat quietly observing the development of the capital for three centuries. This becomes clear when looking out the rear windows of this second-floor flat. In the foreground, the domes of Sir Christopher Wren’s Royal Naval College peek out from between the treetops of Greenwich Park, with the 12 yellow supports of the O2 Arena jutting exuberantly into the sky behind. In the distance, the glass-and-steel towers of Canary Wharf climb towards the clouds. Interestingly, it is perhaps this most modern expression of architecture that parallels the house’s supposed original owner most closely. While not confirmed, it is likely that this Grade II*-listed building was constructed between 1701 and 1730 for banker John Hoare, who would no doubt relish being able to see the beating heart of British commerce from his upper windows if he still lived here today.

However, it is currently Jason Carey, international director of Impressionist and Modern art at Christie’s auction house, who gets to enjoy the view from Point House, having previously acted as custodian to two other Georgian properties in the area since moving to London from Minneapolis 15 years ago. “I love the history and heritage in this neighbourhood, further to its ancient green spaces,” he says. “Because of that, wherever I’ve lived I’ve been curious about who has occupied the building. I’ve gone back into wills, checked the censuses and made some really interesting discoveries along the way.”

Point House is no exception. Before being carved up into nine generously sized apartments, the building was a hotel, a nurses’ home, a gentlemen’s club (the West Kent and Greenwich Carlton Club), a scientific observatory and onetime home to Post Office reformer Rowland Hill, the man responsible for introducing stamps to Great Britain and Ireland.

However, it was one of the building’s original Georgian residents that really caught Jason’s eye: another financier, Andrew Grote, who was one of the founders of what we know today as NatWest bank. “After I read his biography, I discovered that he’d moved here during the 1750s or ’60s and that both he and his wife had been painted by Joshua Reynolds,” principal painter to George III, founder of the RA, and one of the most celebrated portraitists of the period. The personal family archives refer to Point House as an “opulent merchant’s residence… on the summit of Greenwich Hill, commanding a noble prospect of the river Thames and the City of London… enclosed within gates and shaded by lofty trees, having a spacious garden attached.”

Jason began researching the Grote family further and discovered two group portraits of Mr Grote’s children by Daniel Gardner, “which, by very pleasant coincidence, Christie’s had sold, so I could go into their archives and find images and the history of them,” he says.

There are clues to the illustrious history of the house in its architecture too. Outside, Georgian urn finials pepper the roofline and a classical frieze runs below the parapet. Entering through a Doric doorway, visitors are greeted by a hallway dotted with Ionic columns, a chequerboard floor, intricate plasterwork swags, shells and eagles, and a sweeping staircase. Outside, in the decadently large walled grounds to the rear (one of the largest private gardens in Greenwich), three-tiered lawns hint at the tennis courts that were once here, part of the gentlemen’s club.

Outside the front door to the flat, an unusual triangular window catches the eye. “This oriel window is quite unique for the period – they’re generally more Tudor than Georgian,” says Jason. However, their inclusion was less to do with period-appropriate aesthetics and more about curiosity-appropriate practicality of the Georgian Enlightenment. They were likely altered by another former resident, accountant general to the East India Company Commander William Larkins, who looked through them with the 7ft reflecting telescope he installed on the top floor in the 1790s, creating part of what became known as the Larkins Observatory.

Inside the flat, the two bedrooms and bathroom sit in the oldest, central portion of the house. While they have been completely renovated, the original Georgian panelling has been preserved in the main bedroom. The reception room sits in the west wing, an early 19th-century addition. Formerly three rooms, its internal walls were removed to create a large space with windows on the three walls, giving views of London’s northern, western and southern skylines and panoramic sunsets every evening.

“It’s incredible to watch the clouds roll over the city – the light changes so much,” says Jason. “Of course, it was this history that attracted me to the flat, but the beauty of Georgian architecture is that it was designed to be light and airy. That was such a characteristic of the era – the simplicity of proportions in décor and design.”

Over 300 years later, the apartment still honours this sensibility, albeit with a few more modern touches. While the main reception room is of a size to handle stately pieces (note the grand piano), many details are distinctly contemporary. Take the kitchen, where grey floor-to-ceiling cupboards and a sweeping Corian island are paired with light, hand-turned hardwood floors, recessed downlighting and a modest marble fireplace. This is a room that can adapt to a person’s taste, however modern or traditional they might steer. It is proof that, despite the many guises the home has worn over the years – or perhaps because of them – there is still space for more stories in Point House.