On Display: pyramids, pharaohs and the legends and legacy of an ancient world

‘Visions of Ancient Egypt’ at the Sainsbury Centre takes a long view of this remarkable chapter in history and its enduring power – past, present and imagined 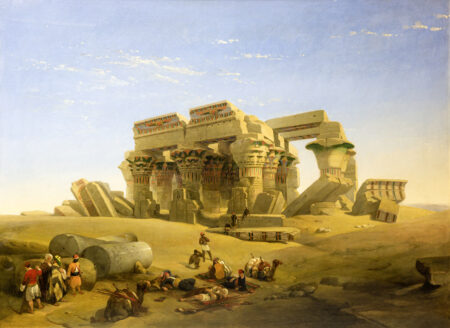 At the Sainsbury Centre in Norwich, an ambitious and astonishing exhibition sweeps across the millennia, from 2000 BC to the present day, including cutting-edge artists like Chris Ofili, who boldly recasts Cleopatra as a Black African queen.

To say it is the ‘allure’ of Egypt and its time-out-of-mind ancient civilisation that has inspired so much art, Egyptomania and Egyptology would be too neutral somehow; it is far more powerful than that. This exhibition, spread over 14 sections that include ‘Egypt through 19th-century photography’ and ‘A Millennium and a Half: from Rome to the Renaissance’, pulsates with the influence ancient Egypt has held over European and indeed African cultures, something hitherto largely ignored.

The exhibition is timely, in that 2022 marks two crucial milestones: the 200th anniversary of Jean-François Champollion’s deciphering of the hieroglyphic script, and the centenary of Howard Carter’s rediscovery of Tutankhamun’s tomb, which caused a frenzy of Egyptomania (or ‘Tutmania’) in the 1970s.

At face value, ‘Visions of Ancient Egypt’ is an exquisite and scholarly exhibition of artefacts and art, photography, ceramics, jewellery and furniture, including the work of contemporary Egyptian artists. But the show also seeks to address the minefield of colonialism, not least how accounts and myths have reinvented Egypt to serve certain agendas – such as propaganda for the French and British imperial regimes of the 19th century. Historically, Egypt’s own voice has been silent, its story is usually seen through the European lens, and the 19th-century looting and plundering of its Pharaonic heritage justified as ‘preservation’, because the Egyptians were portrayed as being indifferent to their past.

One of the earliest exhibits – an enchanting faience hippo of c2000 BC, the size of a hand – is simultaneously timeless. It could be contemporary to Stephen Cox’s Lens of Khafre (1995), displayed in the same section. One side polished to a smooth circular drum, the reverse rough, Cox’s work is carved from Kephren diorite; its stone came from the same quarry as that mined in the making of the monumental funerary statue of the Khafre, the pharaoh who oversaw the construction of the second largest pyramid.

The last Ptolemaic ruler Cleopatra – linguist, philosopher, sage and temptress – appears in many guises. In the 18th and 19th centuries, she’s depicted as fleshy and pale, the epitome of European beauty. This is how Pre–Raphaelite Agnes Pringle’s saw her, painting the languorous queen reclining on the bow of a barge, “like a burnish’d throne… Purple the sails, and so perfumed that The winds were lovesick with them,” as described by Shakespeare. As did Joshua Reynolds, who painted the famous courtesan Kitty Fisher posing as Cleopatra, dropping a pearl into a goblet. Legend has it that the Egyptian queen drank it to prove her vast wealth to her lover, Mark Antony.

More recently, however, Cleopatra’s appearance has been reconsidered. In 2020, Greek artist Esmeralda Kosmatopoulos collected images of the queen’s profile from ancient coins. She then asked plastic surgeons for  ‘consultations’, to see what procedures would be needed to make the Greco-Macedonian woman look like the Caucasian actresses that have portrayed her in films, Elizabeth Taylor among them. The results not only questioned ideas of beauty but also the collective imagination – or reimagination – of the past.

Such reinvention of ancient Egypt has been constant. One of the many fine examples in this exhibition is an engraving by Athanasius Kircher. His ‘imagined’ pyramids of Giza are entirely fanciful, much steeper and taller than the real ones. Kircher’s study was made in 1676, when so few people had journeyed to Egypt, and was instead based on Roman tombs dating to the 1st century AD.

By the early 18th century, Giza’s pyramids were being rendered more accurately. Even though he’d never been to Egypt, Sir John Soane cleverly showed their scale by superimposing elevations of St Paul’s Cathedral with the Great Pyramid, giving viewers a sense of the sheer size and grandeur of the ancient structure as it dwarfs Wren’s dome.

All this is but a fraction of the embarrassment of riches in this stunning survey. ‘Visions of Ancient Egypt’ is a huge feat of curatorial mastery, in which no stone is left unturned.

‘Visions of Ancient Egypt’ is on display at the Sainsbury Centre for Visual Arts, University of East Anglia, Norwich Research Park, Norwich NR4 7TJ, until 1 January 2023. The exhibition will then tour to The Laing Art Gallery, Newcastle Upon Tyne, 28 January-29 April