Inigo & The New Craftsmen: firing up the kiln with Rich Miller of Froyle Tiles 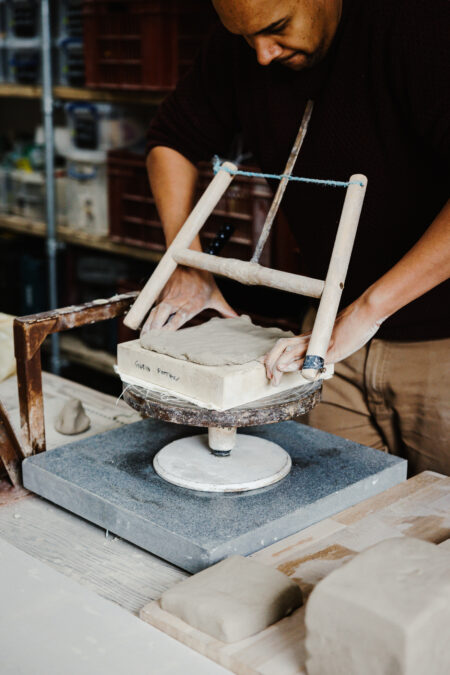 In the second instalment of Inigo’s new series with The New Craftsmen, the Surrey-based ceramicist explains how the humble tile offers him both job satisfaction and a connection to the past.

“It’s just a bag of mud, but it has infinite possibilities,” says Rich Miller, the creative force behind Froyle Tiles – a company that has become famous over the past 40 years for its beautiful handmade tiles, crafted in its workshop in the small village of Hambledon in Surrey. “When you’re done, there’s something about the permanence of your work which is deeply satisfying.”

Born in Devon, Miller – who you might recognise as the most recent addition to the BBC’s Great Pottery Throwdown judging panel – first became interested in working with his hands while accompanying his mother to sugarcraft classes as a child while his father was away with the military. It was during his time at school in West Sussex that he developed a love of both history and ceramics, leading him to turn his interest in the craft into a career.

After completing an MA in ceramics in 2003, Miller bought Froyle Tiles in 2006. Since then his work has combined his love of historic ceramics practices with functional design. “What I think I’ve brought to this company is a studio pottery background applied to something more practical,” says Miller. This is exemplified by the pieces pictured here, many of which use methods associated with the studio pottery movement of the early 20th century, but applied to tiles instead of the vases, dinnerware and sculptures they would have traditionally been used on: Tenmoku glazes, Dolomite white glazes and smoke firing – taking the tiles out of a 1000 degree oven and plunging them into combustible materials. The result are tiles that have a feeling of movement, authenticity and tactility.

“There’s so much that keeps me excited,” says Miller, when asked about why he loves making tiles. “It’s still considered a very humble craft and yet tiles are so heavily integrated into our everyday spaces, whether decoratively or functionally. And there are always new opportunities to collaborate with architects and interior designers through tiles. It feels like I’ll never get to the end of learning about them.”

Below, he explains what ignited his passion for ceramics and how he creates contemporary handmade tiles that pay reverence to the craftspeople before him.

“I’m constantly learning about history and changes that have been made to processes over time. There is always a link to history in our work.”

“I often think about how I became interested in ceramics. My mum grew up in an isolated coastal hamlet in Wales and she’s always been a ‘maker’. As an only child, and with my dad away for his job, I was often my mum’s plus one when she wanted to do crafty things. When I was very small, around 5 or 6, she took up sugar craft and I went to classes with her. Sugar paste has got very similar working properties to clay.

“However, it was my time at school that really turned me on to ceramics. One of my teachers at college was a production potter. I used to watch him at the wheel and I was absolutely in awe of what he could do. It was mesmerising watching clay being fashioned on a wheel. I found school quite challenging as, in a school of around 900 pupils, I was the only black kid, so I got quite a rough time. The art department was somewhere I really found solace. I could get lost in making things.

“While I was studying ceramics at college, I went to Bath on a trip. They had these jugs at the Roman Baths, incredibly functional items that had been used to transport goods around the empire. You could still see the fingerprints in the clay. It felt like a direct connection to the potter all those years ago and that was incredibly exciting for me. At the tile workshop we’re often asked to recreate or match pieces from the past, so I’m constantly learning about history and changes that have been made to processes over time. There is always a link to history in our work.

“We mix all the glazes for our tiles here on site. It’s much like a recipe for baking a cake.”

“Like any ceramic object, we start with clay – an inanimate lump of mud in a bag. We use a very specific clay that we have formulated especially for our tiles. It has a coarse body, which means it has large particles in it made up of ground-up and graded porcelain that gets put back into the body. These help the clay stay flat during production.

“We start with that material then put it through an old clay pug mill from the 1940s. This creates a uniform block of the clay that makes the outer limits of the tiles. Then we have different plates that we put on the end of the machine which extrudes out all of the different sizes and shapes we have in the range. After that we take that block and cut it up in something similar to a bread-cutting machine, which slices it into individual tiles of the thickness we want for that design.

“The tiles are then dried over anything up to two weeks, depending on the design. They are dried on racks, or sometimes on plasterboard as it pulls moisture away from the tiles in a very even way. Only after they’ve dried out do we apply the glaze.

“We mix all the glazes for our tiles here on site. It’s much like a recipe for baking a cake, as you have different elements in the glaze. In each you tend to have a silica (which is used as a glass-former for the surface), a flux (which dictates the melting temperature of the glaze) and a colorant (a chemical such as cobalt oxide to create blues, or copper oxide to create greens). We mix all the natural oxides into the glaze then apply that to the tile. I use a ladle to apply the glaze.

“It’s the thrill of opening the kiln and not knowing what you’ll get that drives you to experiment. Controlling the uncontrollable keeps you excited.”

“What we make here is quite unique as we make tiles to a temperature that’s far higher than the industry standard. They’re all fired to a stoneware temperature of about 1280 degrees centigrade, which gives very specific results in terms of glaze colour and the clay colour underneath.

“What we do next is what we call ‘raw firing’. I apply the glazes onto bone-dry clay with a ladle and the tiles are then fired over the course of three days. After they cool, they’re ready to go.

“Part of what I love about tile making is the monotony of production – you are making large batches of the same thing and I find that quite satisfying. As opposed to my more artistic work, it satisfies a desire to have regiment and discipline. It’s also a fantastic opportunity to learn and collaborate with other creatives.

“As I’m sure any ceramicist will tell you, it’s the thrill of opening the kiln and not knowing what you’ll get that drives you to experiment. Controlling the uncontrollable keeps you excited.”

Froyle Tiles on The New Craftsmen