Lessons from the Past: the value of vernacular architecture

Surrey-based architect Damien Blower’s charitable foundation is dedicated to celebrating his home county’s built heritage through digitised drawings, in the hope it can guide the architecture of the future. Here, he makes a convincing case for the archive’s potential 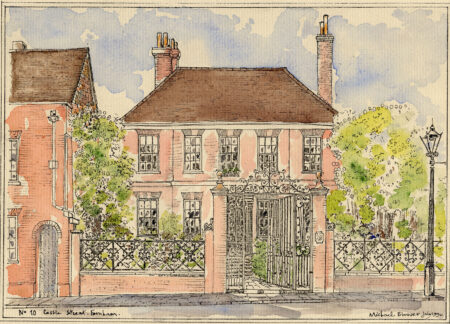 Ask any architect who draws by hand about their archive and, inevitably, you’ll hear a sigh. Roll upon roll of paper, sheet upon sheet, sits on shelves, quietly gathering dust in the dark. It’s important they remain around, they remark, but does anyone ever look at them?

Damien Blower, one such architect, believes they should. “The history of buildings is the history of us,” he says. “These drawings are worth looking at – not least if the buildings themselves have been lost.” That’s the impetus behind the Blower Foundation, a charitable enterprise he set up in 2003, alongside running his family practice, Stedman Blower, which largely works with historic houses. He and a team of volunteers have thus far digitised around 5,000 drawings, from both the practice’s own archive and those of others working in his native Surrey. Indexed and recorded, they can be accessed, filtered and searched by the public for free.

Damien’s focus is, broadly, the Surrey vernacular of the 19th to the 21st centuries. While there are big names in there – Detmar Blow, for instance, or Lutyens – many of the drawings are by relatively unknown architects. Without the archive, these people would become nameless worker bees, lost in time. Yet their impact on the world today, Damien argues, is impressive. There aren’t just plans for grand homes but for pubs, shops and bus shelters too. They are on the one hand “works of art, but they’re also documentary evidence of a working life.”

There’s also a practical application to Damien’s ceaseless searching and earnest recording. As an architect, he says, being able to quickly search for a building’s history – how it may have looked in an earlier iteration – will prove enormously useful. The intel could be used to produce heritage statements and support planning applications on the one hand, but it would also allow an architect to “collect a body of projects to better understand local character at a micro level.” While localism has always mattered to architects, Damien’s point lends weight to the argument in an increasingly fractured global world.

He’s got a while to go, he says – but his dreams for the Blower Foundation are big. “In part it’s about preserving my own family’s history as creatives, but it’s also about protecting the Surrey vernacular – and the legacy of those working within it.” That’s something we can get behind.

“This whole project began when my first employee died, very tragically and very suddenly. Aged 32, he was diagnosed with a rare form of heart cancer and a fortnight later, he’d gone. It was devastating. He was so young – and had been talented. It caused me to think about our life and work as architects in a major way. At first the trust focused on architectural exchange programmes. It was interesting, but it wasn’t at the core of what I was passionate about, which was old buildings.

“When I took over my father’s practice in 1996, I inherited two containerloads of drawings, some dating back to 1895. They are beautiful objects – just gorgeous. And, having been shown old drawings by clients of their houses as references, I realised the true value of them. Not only do they tell stories, but those they tell are relevant today.

“Some of those plans were by some really talented architects, who may or may not have ever been particularly commercially successful, but were instrumental in shaping my local landscape. What I’d like to do, by creating this online archive in the public domain, is to capture the spirit of a place over time, through a record of its built geography. Just as if you throw a drawing away, it’s gone forever, if you digitise it and put it on the internet, it will remain there forever.

“Fashion has, historically, been the enemy of drawings like this. In our archive we have a collection of drawings of Tudorbethan houses from the interwar period. While they are – at the moment, at least – terribly unfashionable, I would argue that they’re very important. Tudorbethan came after the Edwardian period, the architecture of which we value highly. The same is true of lots of the drawings I have of 1960s and 70s suburban Surrey. It’s not Brutalism or the International Style, but it came about at least in part as a result of those developments. We can’t ignore architects or architecture just because it’s unfashionable now.

“There’s a strong vernacular tradition in Surrey, which we’re trying to record in a usable way. It’s reflected not just in style, but in materials too, as well in form and scale. Buildings should, I believe, respond to these local traditions. Not copy them, but speak the same language. Vernacular to me isn’t about the polite tradition of architecture – the perfect proportions of the Georgians, for instance, or the correctness of neoclassical buildings. It’s about the locals – the people who used these buildings. That’s not to say at all that they’re not designed or considered, because they are. It just means that a humble farmhouse and a bus stop have as much relevance in architectural heritage as the formal buildings in our foreground, as it were. They are the background to our lives. That has to count for something.”