A Home with a History: Kate Braine’s art-filled Queen Anne house in Chelsea 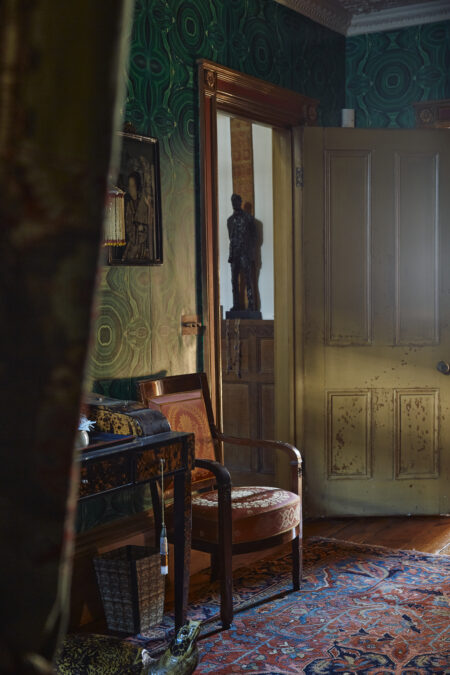 Entering Kate Braine’s Queen Anne house in Cheyne Row, Chelsea, is like stepping into a different world. Or rather, a series of different worlds. Each room, richly decorated with the artist’s sculptural ceramics, has its own story to tell and its own distinct atmosphere. The surrounding neighbourhood has a history of creativity: festooned with blue plaques, it was the domain of many artists and writers in the 19th and 20th centuries. Dante Gabriel Rossetti, Augustus John, James McNeill Whistler and J.M.W. Turner lived and worked in the area and the historian Thomas Carlyle’s house is nearby. Today, of course, it’s more the province of oligarchs and the fabulously rich. Which makes Kate’s home rather singular: having lived in Chelsea all her life, she is one of the few working artists who remains in the neighbourhood.

Kate’s background is in sculpture: she studied the discipline at City and Guilds Art school and went on to create portrait busts for and of the likes of David Bowie, Chuck Berry, Colin Wilson and Francis Bacon (the lattermost commission was a clandestine one – she had to follow the artist for months to capture his likeness).

In 2003, she and her friend and next-door neighbour Charlotte Legge started a jewellery company, Legge and Braine, which offered outlandish cocktail rings and pendants made from Murano glass and gems. At this point, Kate’s house became a showcase for their collections.

Though Kate has since shifted gears and turned her polymathic talents to ceramics, the house remains a handsome backdrop and exhibition space for her creative endeavours. In 2019, Kate held her exhibition “Tendril is the Night” in situ, installing the house with triffid-like pots that seemed to grow out of the woodwork, alongside a terracotta army of botanical, marine and alien forms saturated in lustruous glazes.

Below, she walks Inigo through her the gloriously detailed spaces of her home.

“When I moved in, I changed everything.”

“I never thought of my house as being an exhibition venue until I had a retrospective, in 2019, of two decades of work – over 300 pieces. My curator Fru Tholstrup, a former director at The Haunch Of Venison Gallery, came up with that brilliant idea. Fru said it made perfect sense because there is a genus loci that links Cheyne Row to pottery. Both William De Morgan, the Arts and Crafts ceramicist, and Josiah Wedgwood lived and worked here. Lawrence Street, round the corner, was home to Chelsea China until it was bombed during the war.

“When I moved in, I changed everything. I had Christophe Gollut’s genius touch to help with interior design. He had clever ideas like reversing the paisley fabric in the main bedrooms – it looks better on the weft side, so all the tassels show – and he also made the canopy and drapes for the bed. Above my bed is a portrait of me in the nude lying on a leopard skin by Ishbel Myerscough. Both the looking glass and table are Venetian.

“Initially I did a lot of restoration, scraping off all the old paint on the stairs, in the stairwell and hallway and carefully preserving the delicate stencilling on the floorboards in the hallway and the wainscots, which is designed to look like marquetry. The trompe l’oeil painting was done by an assistant to the Italian designer Renzo Mongiardino in the 1930s. The bathroom has handblocked wallpaper by Christophe Gollut and two Provençal armoires. I had them copied for the other fittings and fixtures and the Corinthian pilasters – the cabinet maker did it so well I can’t tell which is the original.

“Originally, the drawing room was a studio – the smell of turpentine hung in the air.”

“Charlotte found the malachite emerald green wallpaper for the ante rooms to cover up a leak. It was tricky to hang because it has to overlap by a half an inch to get the desired effect. On the mantlepiece is a selection of Chinese artefacts and reliefs I bought in Singapore – the green malachite sets off my collection of Napoleoni Martinuzzi’s Murano glass sculpture.

“Originally the drawing room was a studio – the smell of turpentine hung in the air. An artist frescoed the walls, but I’m planning to stencil tendril motifs on the fresco, like a frieze. I raised the stuffed lion on a plinth to give him dignity as the king of the jungle. I must stress: it’s an antique – I didn’t stuff or shoot it. I bought the camel on the windowsill, meanwhile, from the Sladmore Gallery.

“Beneath the Painting of Lions by P. de Clercq – which I sourced from the antiques dealer Alex di Carcaci, is a display of smaller pots in a cabinet by Daniel Cottier, who pioneered the Aesthetic movement and was a profound influence on Tiffany. The fireplace I put in is William III – I love the medusa head and putti mouldings. On porphyry plinths from Guinevere Antiques are my busts of Francis Bacon and Ian Board, the proprietor of the famous Soho drinking club The Colony Room. When he died, I was asked to pour his ashes into the hollow of the bust and was honoured to take part in this ritual at his memorial.

“Lockdown was so productive for me. I sold works in “Art from the Kiln”, an online auction at Christie’s last June. Recently, friends have given me Victorian butter moulds which I have incorporated into my ceramics, using stoneware ivory and white satin glazes. I nailed 300 ceramic hearts to the kitchen walls – that was my lockdown indulgence, painting some a deep red to match the paint scheme, which was informed by the painting above the fireplace – a Matisse I bought on a beach in Thailand. The table is a French Zinc piece from a monastery, and the crustacea candle sticks and chargers I made in lockdown too. The kitchen chairs, meanwhile, are made of chicory – I bought them from the Rainforest Cafe.

“The dining room has hand casts from a series of moulds that I was commissioned to make – these run along the panelled top shelf – and the candlestick dancers and chargers on the table are mine too. The curtains are by Christophe and lined with a paisley material, while the ikon is Greek. The panelling is a later Victorian addition. In the hallway is an installation of my “Veg or Vag” ceramics. The sculpted figure is of an actor from my art school days.

“Outside in the garden you will find my pottery graveyard, sprouting hundreds of shards and tendrils from experiments or explosions in the kiln. This is housed in my studio, an old Turkish bathhouse. Here I have everything I need for throwing pots: the potters wheel, the kiln and room for the myriad different glazes I experiment with. The possibilities are endless. A day not making a pot is a day wasted.”

Kate Braine’s ceramics have featured in exhibitions at Argile Gallery, Art for Mayfair and The Mall Galleries. Discover more via the Kate Braine Studio website