A Home with a History: how landscape and literature come alive in Jane Mulvagh’s thoughtful decorating

For Jane Mulvagh, historian and biographer, references are critical – and not just when it comes to writing. Ulcombe Place, her home in Kent, is full of decorative footnotes, whether it’s the blue of a hussar’s uniform or the Austenesque air of its Georgian architecture. Here, she talks Inigo through her sources 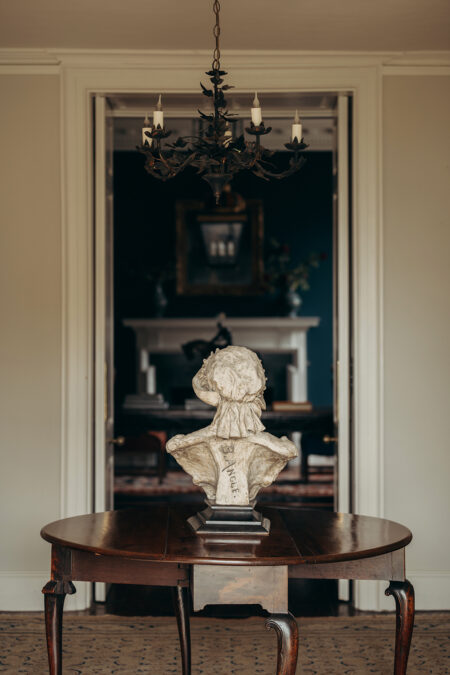 Jane Mulvagh has many strings to her bow. Fashion historian, biographer, lecturer and one-time television presenter, she worked at Vogue for eight years before moving to the Financial Times, where she wrote a weekly column: Me and My Wardrobe. As well as all this, she has also found the time to write five books, including a history of Madresfield Court, the Worcestershire country house on which Evelyn Waugh’s Brideshead Revisited was based. Beyond her significant academic and professional achievements, Jane also has a profound and innate sense of beauty (she subscribes to the old William Morris dictum on usefulness); she is a perfectionist with a fine appreciation of art. All these sensibilities manifest at Ulcombe Place, her brick-and-stone house on the Kent Downs, where she lives with her husband and two daughters.

Her approach to decorating is decidedly painterly. At Ulcombe, every corner is a still life, every room a composition. To walk through its rooms is to travel through an unfolding diorama akin to paintings by Edouard Vuillard: dappled light falls on pastel-painted walls, French windows open onto a garden of scented flowers. There are fine brocaded chairs and artfully set tables for tea. Exuberant wallpapers join rich textiles and wall hangings, and there is an abundance of lavish details and vivid colours. An air of nonchalance and good living pervades, thanks to Jane’s vision for the house. It’s her contribution to what she calls this “gentle slice of England, where serried ranks of apple trees display man’s hand in the land.”

“The lawn rolls down to a pair of topiarised birds, beyond which stretches the 30-mile view across the Weald of Kent”

“Originally, we were looking to buy in Hampshire, but had found that too many houses there had been modernised, so we came to Kent. As soon as we turned the corner of the drive and peered under the drooping hazel trees, all four of us cried: ‘Yes!’

“At right angles to our gaze stood the doll’s-house symmetry of Ulcombe’s pretty brick Queen Anne façade. Ahead, the return wall of the Georgian extension was covered, top to bottom, with a climbing white hydrangea. The outer edge supported the painted fretwork of the Regency veranda, which wraps around both the west and south of the house like a generous, L-shaped outside room, and the lawn rolled down to a pair of topiarised birds, beyond which stretched the 30-mile view across the Weald of Kent. The house was tired, though. Green slime lurked behind the climbers and, once we had bought the place, other challenges emerged. The southern ragstone façade had to be completely repointed, the lead on the roof had to be replaced and the entire house needed redecoration.

“The house itself sits on early medieval foundations. It was built between 1207 and 1228 by Stephen Langton, Archbishop of Canterbury, and then significantly remodelled in the Georgian period. Later this year, a blue plaque is going up to commemorate the two years the theologian, poet – and now Catholic saint – John Henry Newman spent living in the house. He wrote his celebrated Nature and Art, in which he speaks about ‘an Ulcombe of the heart’, sitting on the veranda.

“Six French doors open onto the veranda and terrace, beyond which the gardens fall away like petticoated skirts”

“The renovation took a year. We gutted the top floor, redid the bathrooms, converted the boot room into another kitchen so we could cater for big dinners and redecorated the whole house. We also restored some sheds in the courtyard, so they were ready for conversion: one into a laundry, another a gym. When it came to decorating, I looked outside first, making sure the colours and papers I chose complemented the gardens and the ancient church. For example, one of the guest room’s toile de Jouy is the same colour as the manganese-pink magnolia buds outside the window. In the library, overlooking the church, calligraphy paper by Pierre Frey mimics the gothic strokes of the church windows.

“Ulcombe has the feel of a Jane Austen novel – more the Bennetts’ house than Pemberley! But it also has the openness of a summer house, with its six French doors opening onto the veranda and terrace, beyond which the gardens fall away like petticoated skirts. It is a very feminine house.

“There is only one masculine room – the entrance hall in the Queen Anne part, with its strict block cornicing, high ceiling and bold fireplace. The scheme in here was inspired by a Prussian hussar’s uniform: Farrow & Ball’s ‘Hague Blue’ provide a backdrop to the pomegranate ‘epaulettes’ of the 17th-century Ottoman fabric. I’ve hung a portrait I got from Philip Mould in here, of the Whig statesman Charles James Fox. He’s my pin-up – I would have liked to have gone on the hustings with him. By contrast, the drawing room is of the palest pink. A broderie Perse Tree of Life textile was my colour reference for everything in this room; I took Paint Library’s ‘Wild Silk’ and lightened it until it looked like the inside of a seashell.

“I can’t operate in modern kitchens – I find them too clinical – so I have hidden all evidence of machinery. All you can see is the old black range. The walls are painted the colour of parma violets, and two Japanese birodo yūzen (cut-velvet pictures) from the Meiji dynasty hang opposite one another; a riverscape and Mount Fuji. I like the walnut-brown tones of the velvets against the mauve walls. When we have big dinners, I can seat 32 people: 12 in the kitchen, ten in the garden hall and ten in the entrance hall. In the summer, with the veranda, we can manage up to 50.

“Whichever is the smallest room in your house, go to town on it – the square footage you need to cover is small and therefore affordable. In my case, it was the downstairs loo. The wallpaper, ‘Verdure’ by Zoffany, reminded me of the Kent countryside and the mosaic floor – which is the same three colours as the wallpaper – was sourced by my friend Christophe Gollut, who knows many craftspeople in Lebanon.

“In the garden, it’s a palette thing. I tend towards bruised pinks, mauves, clarets and hyacinth blues, interspersed with the almost blackish purples of bearded irises, viola nigra and heuchera ‘Obsidian’. It’s like the outside is echoing the inside – as in the main staircase hall, for instance, where my husband’s pichwai (Rajasthani paintings on cloth) are hung on walls painted dark aubergine below the dado and bruised pink above. It was Zika Ascher, textile designer to many of the great couturiers, who taught me to use colour in a powerful way.

“All my books have, to some extent, informed my decorating. Writing Vogue: History of Twentieth Century Fashion, I learned so much from Zika in particular. I have framed many of his silk square scarves that he printed in collaboration with Cocteau, Schiele, Matisse, Calder and Clavé. The years I stayed at Madresfield were fascinating; the owner, Rosalind Morrison’s, mantra was that it is imperceptible change, not violent revolution, that lends a grand stately family home its timeless comforts.”