Inspiration of the Week: prints charming – patternalia in a regal residence in north London

This week’s choice listing is a handsome lodge in Islington, where maximalist motifs and decadent prints reign supreme. 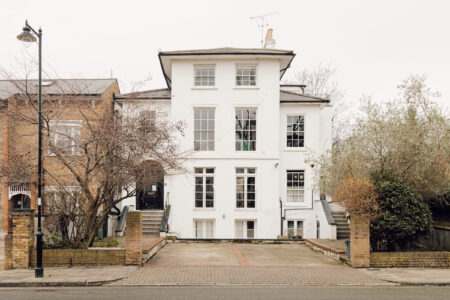 Modernism’s lodestar Adolf Loos was big on the idea of ornament as crime, but here at Inigo, where no frill is too large, no swag too sumptuous, we subscribe to a somewhat different school of thought. Ornament is sublime, we declare. More is more! And this handsome home in north London, which came on the market with us this week, stands by a similar doctrine, making it simply splendid in our eyes.

The four-bedroom pad rambles over the top three floors of the White Lodge, a grand stucco-fronted building constructed in the 1830s, on the threshold between the Georgian era and Victoria’s reign. With princely proportions, original joinery and pretty plasterwork throughout, it’s a right royal treasure for anyone with a penchant for period details. But the crowning glory? The current owner’s decorative interventions – in particular, the profusion of print and pattern.

Maximalist motifs, by turns joyful, dramatic and vampish, sprawl on the walls, thanks to patterned papers. We’re particularly drawn to the dining room’s rampant floral, a statement design by House of Hackney called ‘Amaranth’, inspired by Diana Vreeland’s dizzying red room. A close second is the dreamy Deco glamour of the guest bathroom’s ‘Gershwing’, a creation of Divine Savages, while in our favourite bedroom, lavish leopard curtains and another House of Hackney paper (‘Zeus’) make for print-on-print perfection.

Tiles, too, turn it up a notch – starry encaustics cover the floor of one bathroom, while textured squares like pressed tin make for a splashback that begs to be stroked. And, speaking of surfaces… Have you spotted the Anaglypta in the second sitting room? It’s a clever nod to the house’s 19th-century roots brought bang up to date with aubergine paint – and it makes a convincing case for the revival of embossed wallcoverings.

It’s not all decadence and excess however. Peace comes from the grown-up paint palette – think blushes of pink, dove grey and forest green. For every extravagance, there’s a quiet counterpart, for almost every pattern a plain. The White Lodge is an exercise in balance – albeit one that tips just the right way for Inigo’s luxy leanings.