Inspiration of the Week: urban living on a grand Georgian scale

Large in size and lovely in countenance, this 18th-century Bath-stone beauty, designed by one of the city’s best architects, is up for grabs 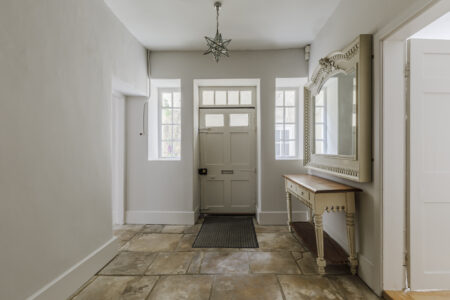 Austen aficionados rejoice! (And fans of Bridgerton too, for that matter…) We’re pleased to say that this glorious Georgian house, at the northern reaches of Bath’s city centre, has come on the market.

Just under five minutes’ walk from The Circus and just a little more to the Royal Crescent, Russell Street is one of the city’s most handsome thoroughfares, sharing an architect with those legendary landmarks: John Wood the Younger. If his father was the king of Palladianism in the celebrated spa town, John junior was the prince, taking on not only is father’s mantle but many of his projects too. Russell Street was his own, however, and today stands as a testament to his bold vision and brilliant design.

This particular house – Grade II-listed, double-fronted and with five bedrooms – is in spectacular condition. A list of its perfectly preserved original features reads like a glossary of Georgian architecture. From flagstones and floorboards underfoot to crisp cornicing, broad bay windows and 18th-century cupboards, almost every room in this five-storey house retains a hallmark of its history.

Recognising that such architectural splendour speaks for itself, the current owners have kept decorative interventions to a minimum. Placid paint colours meet timeless textiles in the house’s more formal rooms, while contemporary art and the occasional flash of chrome or bronze leather serve to root the décor – quite rightly – in the here and now. We love the meeting of the basement’s Bath stone features with mid-century silhouettes and shades.

Other details we’ve fallen for are somewhat more unusual: the ‘snuffer’, for instance, which would have originally been used to extinguish flaming torches, can still be found by the front door; and the pre-telephone whistle-pipe communication system that once connected the main rooms to the basement. None of this is to say we don’t appreciate the mod cons, though, not least the high-spec kitchen… In fact, this best-of-both situation seems to sum up the whole house – and we’re very keen on it indeed.