A Room of One’s Own: the unlikely home of Pablo Bronstein’s latest show, ‘Hell in its Heyday’

Pablo Bronstein’s exhibition of infernal post-modern cities sits in an unusual setting: Sir John Soane’s Museum. As the artist tells Inigo, there might be more of a connection than you first think 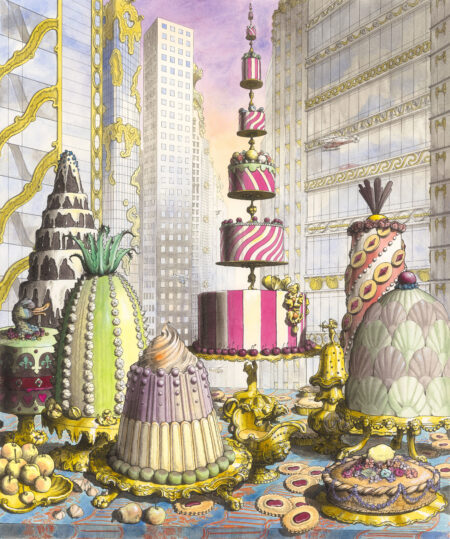 An 18th-century townhouse in Holborn isn’t perhaps the obvious choice for an exhibition of Pablo Bronstein’s work – not least the pieces making up his current show. Each of the watercolours in ‘Hell in its Heyday’, on show at Sir John Soane’s Museum, is a saturnalia of superabundance, a rampant vision of a reckless post-modern world, where everything is available to all, and every commercial want is satisfied. In them, sickly clown-like creatures sunbathe in holiday resorts, or cavort in vast department stores, while candy-striped cakes vie for primacy with thrusting skyscrapers. The works on paper themselves are as decadent as those rich confections, somehow both irresistible and revolting. They are the diabolical antithesis to Soane’s neoclassical dream.

Or… are they? Inigo’s conversation with Bronstein, which took place as he walked us round Soane’s South Drawing Room, was as surprising as it was enlightening. This part of the museum, with its taffeta curtains the colour of custard and busy Brussels carpet, holds a particular fascination to Bronstein. It’s thanks to the drawings by Soane’s principal draughtsman, Joseph Gandy, stored in its cabinets (more on these below) – and, incidentally, next door to the galleries in which the watercolours are being shown. While perhaps we’ve rather bent the rules in allowing him to choose a room not strictly his own, such irreverence rather befits this agile-minded artist. If Pablo Bronstein can’t make a connection between post-modern horror and the world of Sir John Soane, who can?

“The pictures I’ve done for this show are big. I think they’re probably at the limit of what I’m able to do at this level of concentration. Anything bigger and everything has to upscale. In the end, viewers lose the detail that you get from being able to study something up close. In that sense, I was kind of playing to the house here, as the gallery space in the Soane museum warrants close inspection. As a visitor, you’re allowed to get near the picture, unlike in other galleries where you just get a glimpse.

“The idea of my doing a show here came about a while ago. I’ve been making work about post-modern architecture for some time. It used to be a bit of a taboo subject, as people just loathed it as a movement. They almost found it disgusting. In recent years it’s become something of a hot topic, but Owen Hopkins, who used to be senior creator here, was always obsessed with the postmodern revival. He felt I should be included in the programme here. Then, when Louise Stewart took over, she looked at my work in a different way. She’s an expert in festival architecture and Baroque festivities. She also knows a lot about cakes. But they both thought I fitted in one way or another, so it’s a combined curatorial effort, really.

“The pieces are, essentially, a result of lockdown. Like everyone, I had a year and a half of nothing, but it also meant I didn’t have to produce anything in a hurry. Suddenly I had all this time and space and silence. And this is what was inside my head! My work has always been quite readably architectural and I think that’s what people came to expect of me, but it meant there was less opportunity, from my perspective, for exploration. I could suddenly buy all the books from Abe Books I’d always secretly wanted. You press a button and a few days later you’ve got that book of 1950s advertising posters or the cookbook from the 1930s you’d had your eye on. I’ve always liked that stuff, but it’s been outside my range of vision. I’ve not had space to roam, because of the reality of working in the art world.

“There is a link between my work and this place. I admit that there’s no obvious connection between late 18th-century architecture and postmodernism – that just happens to be my schtick. But I do find something in common between them, which is that they rely on a kind of playful classicism. They’re both taking something that evokes the classical and bringing some fun element to it, some joke, some perversion, some twist. Obviously, Soane was guided more by revolutionary ideals of how architecture should be, whereas postmodernism is essentially a commercial enterprise more than anything, but the link is there. Not least because this museum is, really, a temple to acquisition. Soane was clearly a voracious buyer and spent tons and tons of money on luxury objects that were completely beyond the scope of affordability for most people. It’s a bit of a myth that he was just this altruistic purveyor of museum rarities. He was also a property dealer! In fact, this exhibition space was actually originally separate from the house – he always intended it as a money earner. I kind of like that idea. It feels in line with the postmodern thing to me.

“When people imagine Soane the person, in fact they’re often looking through the eyes of a man called Joseph Gandy, who was Soane’s principal draughtsman. Those famous drawings of the Bank of England are Gandy’s handiwork. The cabinets in this yellow drawing room are full of his work; it’s so wonderful to look through them. As well as being Soane’s foremost visualiser, Gandy also did his own quite wacky stuff – visions of heaven and hell, for instance. They’re kind of creepy, quite double-edged, quite infernal – another parallel with the kind of excess of postmodernism. I suppose you could say some of those things about the drawings in this show – not that I noticed as I was making them. I was too busy ordering old books.”