A Private View: moving with the times – the clever refurb of a Huguenot house in Shoreditch

History can easily slip through one’s fingers. But not those of Charlie Gower and Jules Miller, a couple determined to honour the Huguenot past of their Shoreditch home, a former silk makers’ house, while making it fit for modern living. As it comes on the market, they weave the tale of their thoughtful restoration 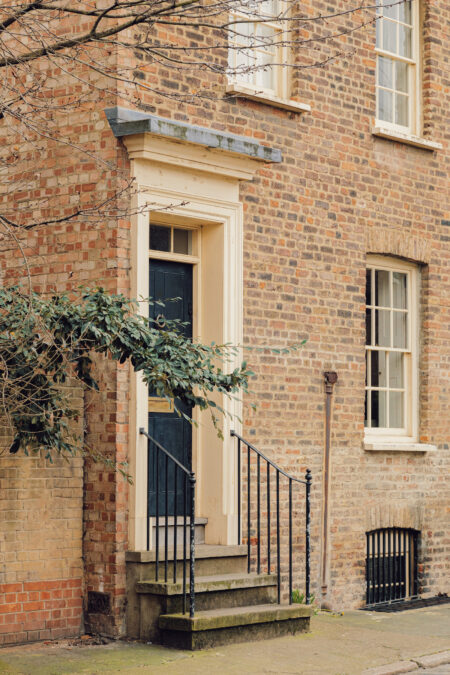 Tucked in a corner of bustling Brick Lane is an unexpected sanctuary. When Charlie Gower and Jules Miller, the couple behind of-the-moment supplement company The Nue Co, first laid eyes on their future home here, they couldn’t believe their luck. “I fell instantly in love as soon as I saw the living room, with all its beautiful woodwork,” says Jules.

As a couple that enjoys moving around – they’ve hopped between rentals in Dalston and New York’s Gramercy Park and Williamsburg – they knew that it would take something special to make them settle on buying something permanent. As Charlie says: “We love moving. I’ve moved house every year since I was 18. This is the longest time I’ve ever been in one place. We’re only upsizing because we are starting a family, but we love it here.”

It’s rare to find a house in this part of town that remains so unspoiled. Jules and Charlie’s sensitive restoration of their historic home has brought new life into the space, though still honours the Huguenot history they’ve found layered in each brick. Now, as they put it on the market with Inigo, the couple sit down to tell us about the romantic story of the house, their favourite local spots and how their bricolage interior style is really a reflection of them.

Charlie: “We always knew we wanted to buy something slightly dramatic and quirky, something that didn’t look like anything else. We were instantly taken by the woodwork here, the high ceilings, the courtyard and all the light it gets. The panelling was done at the suggestion of the amazing architectural historian Dan Cruikshank, who’s known for his work on Huguenot houses. When you have a home with these types of features, you don’t have to put too much effort into making it beautiful.”

Jules: “There are only three townhouses on the north side of Brick Lane, which are the three here. The two next door have been modernised, but this one has been maintained beautifully – it still has its original look, feel and design.

“We love the history of this building. In New York, we really missed the older buildings of London; this house isn’t that much younger than the whole of New York! It was built in 1760. Even in its pre-renovated state you could see its potential. When you walked in, you were taken to a different planet.”

Charlie: “I fell in love with the courtyard. I realised that, in the right hands, it could be made into the most stunning space. There are still so many possibilities for this place. Before we decided to move, for instance, we put in a planning-permission request to turn the roof into a garden with a walkway of glass. We’re waiting to hear! It was born out of the element of surprise that this house has. We’ve never seen anything like it in the area. In London, it’s such a treat to have the view of the City as well as one of the modern post-war flats of east London. I love how you see the diversity of the capital from our window.”

Jules: “When we moved in there were some modern showers and loos, which we didn’t like, so we redid them and reverted them back to a Huguenot-style bathroom – though with mod cons, of course! There was also an island in the kitchen that separated the living space; we got rid of that to open up the room and instead added a big dining table in the middle. In fact, we redid the whole kitchen; it now has copper countertops, which we love. We didn’t change the floors, though, as they were incredible. They were installed by an architect in recent years, who wanted to recreate the original feel of the home from hundreds of years ago.”

Charlie: “The story of this building is fascinating. The first owners were silk makers – the original traders of Brick Lane. There would’ve been a family living on each floor, with a communal bathroom outside and a shared living space on the ground floor. When the weavers eventually moved out of Brick Lane, the building fell into dereliction. No one lived here for decades until the 1990s. When you consider how old it is, it’s incredible that it’s survived – and so well. There’s never been a leak, it’s always warm. We tried to change the name to Silk House to maintain that history, but it hasn’t been approved yet.”

Jules: “We also have underfloor heating, which is pretty special for a house of this age. We love the history of the home, but we also added modern features to make it easy and practical to live in. We have a boiling hot-water tap, air-conditioning… We redid the wiring to make sure that the plugs are all in the right places, near beds and sofas. We weren’t afraid of adding a modern twist – and little things can go a long way.”

Charlie: “Because we both operate at a thousand miles an hour, we really wanted to have a space that feels homely and a bit quirky at the same time. I mean, look at our copper countertops! The copper is meant to develop patina over time; I really enjoy seeing the marks of history build up.

“We also really wanted every room to have a slightly different energy. In the downstairs bathroom, for instance, we have a very fun mix of House of Hackney wallpaper with an original Thomas Crapper sink.”

Jules: “Upstairs, we kept it really classic, with walls in ‘Wimborne White’ by Farrow & Ball. It brightens things up the room and accentuates the relaxing aura. We are lucky with the natural light here. Because of the skylights, you get sun all day coming from different angles.”

Charlie: “It’s the perfect mix of being a sanctuary and right in the mix of things. If you want to spend nights in making dinner, you can do that, or you can host parties here – we’ve had some really wild ones. Alternatively, you can so easily go out to the best restaurants in London.”

Jules: “We love Jolene on Redchurch Street, and Pavilion. Both are so close. And we eat from Sichuan Folk about twice a week at the moment. There’s also Gunpowder near us, a Michelin-starred Indian restaurant. The flavours and textures of their dishes are phenomenal. And Columbia Road is a 10-minute walk away. I love the cheese shop there.”

Charlie: “On Sundays, I love lying on the sofa in the sitting room, seeing and hearing all the people walking past with their flowers from Columbia Road.”

Jules: “There’s such a community here. The people in the coffee shops know everyone by name and we’ve made friends in the park from dog-walking. You’re as likely to bump into a vicar in her twenties, dressed in Doc Martens and with a great dane, as you are the tech entrepreneur with his French bulldog. The diversity of our friends here is a direct consequence of the area. Yet we’re still so central; you can be at Liverpool Street station in ten minutes.”

Charlie: “This house has so much potential. It’s so historic yet, we hope, it’s also practical. I think that’s what’s so exciting about it. We hope anyone that moves in here will love it as much as we do.”