A Private View: how embroiderer Eppie Thompson got London living all sewn up

As a first-time buyer, the founder of the Fabled Thread knew exactly what she wanted. Fate cottoned on and she bought the first flat she saw. As her Dalston home comes on the market, Eppie explains how she wove her life into her zippy living spaces 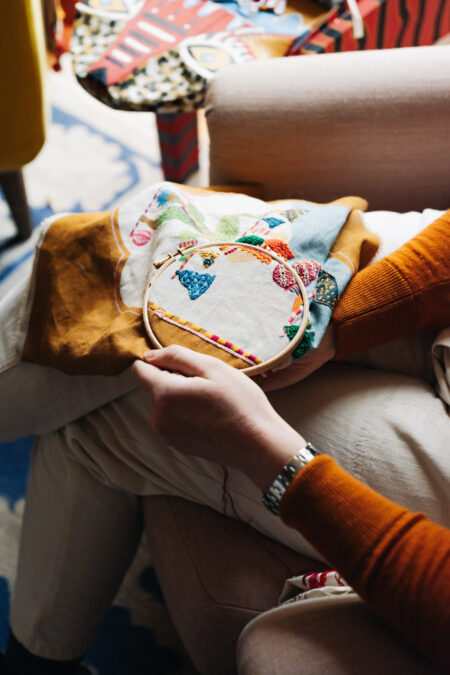 Uncompromising isn’t the first word one would use to describe Eppie Thompson. Good-natured, yes. Creative, certainly. But intractable? No. And yet, when it came to buying her first home, Eppie, the seamstress behind The Fabled Thread’s darling DIY embroidery kits, was utterly resolute. She knew exactly what boxes needed ticking – and she’d be damned if they weren’t.

It transpires that those tick-boxes took the shape of this enchanting garden flat in Dalston, currently on the market with Inigo, which she shares with her scruffy canine companion, Roger. It was, however, very different when she moved in – white, Scandi-style and not to this stuff lover’s taste at all. As it stands today, the apartment is testament not just to Eppie’s creativity, but to her pragmatism too. For while her cheerfully maximalist taste has brought oodles of character to the place (and characters too – note the embroidered circus performers dotted around), Eppie’s execution of the flat’s playful costume change – completed in just three weeks – was a masterclass in practicality. “There were quite a few spreadsheets,” she says, grimacing at the memory.

Eppie’s work has paid off. She has made it just so, which is why, she explains, leaving it will be such a wrench. It has been – as with so many people’s first homes – a very personal project. The result is a house rich in texture, both literally (one wants to touch everything, even the framed bits and bobs that generously populate the walls, many of them made by Eppie herself) and metaphorically. It is an homage to the things she loves, packed to the rafters with objects that bring her joy. “It has been the perfect first flat,” she explains, but the time has come to move on, “for someone new to come and leave their own mark on it,” for a new thread to be woven into the fable.

“I knew just what I wanted when I started looking. I knew where I wanted to be; I knew I was going to get a dog, so I needed a garden; I knew I wanted an old property – Victorian at least; and – crucially – I knew I wanted a kitchen that had enough space for me to have friends round for dinner, but that didn’t have the sitting room in it too. It meant my search was pretty restricted, I admit. It’s hard to find all of that anyway, let alone in London. Especially for my budget, which limited me to a one-bed.

“Amazingly, this was the first flat I saw. I was incredibly lucky. It just felt right. That said, the interiors were not my style at all. They were very minimal, very Scandi. There was one sofa in the sitting room and nothing else. No pictures on the walls… I had a bit of work on my hands! I wanted to change everything. So that’s what I set about doing. I added a new kitchen, a new bathroom, built some wardrobes in the bedroom, added the panelling in the hallway, the cupboards in the sitting room… Almost everything is new – save for the floorboards!

“In fact, the floorboards were such a selling point to me. They run all the way through the flat and they’re so full of character. I love the gaps and stains, the marks that have been left over time. Plus, I think it makes the more ‘period’ features that I’ve added, such as the panelling, feel in keeping. I like to think it might have looked similar to this once upon a time, but when I got here the only things hinting at its history were the sash windows. I felt like I had to bring something back.

“I was working in finance when I bought this place, but I’d known for about 18 months that I was going to quit to run The Fabled Thread full time. I was very conscious of the fact I was about to go through a long period without any income, so I’d been saving and saving to see myself through.

“I planned everything. Every single thing – right down to what kitchen utensils I was going to buy. I needed to be precise, because of the financial instability I was about to face. I had the most detailed spreadsheets you’ve ever seen! I got all the tradesmen lined up too. It meant that when I exchanged, I could stay at my cousin’s place while I got everything done.

“The whole flat was finished in three weeks. I didn’t even buy a single sample pot of paint – I just dived in and crossed my fingers. Very, very hard. On both hands. Thankfully it worked; the only things I’ve since played around with are the colour of the bathroom and the kitchen cabinets, which originally were going to be two colours, but it looked a bit weird.

“I can see why the previous owners went with the white look. It’s a basement flat, so they probably thought it would brighten things up, but I think it had the opposite effect. It felt so uncheerful. I wanted to play to the strength of the flat, which is that it’s really cosy. It’s why colour works so well in here, even in the bathroom, which doesn’t have a window. I was paranoid that painting it anything but white would make it feel dark, but actually it really works. Sometimes you’ve got to go with the grain, embrace the darker corners.

“I feel very lucky that my first adult home was a historic one. The backdrop to my childhood was a 16th-century farmhouse in Yorkshire that had walls about a metre deep, and our family holidays were always in Landmark Trust buildings. I grew up dreaming of one day owning an old house with wonky floors – one where, when you drop a marble on the floor, it rolls to the other side of the room. I like the wobbles, the irregularities – they’re what give you the sense that the house has had a life before. Buying this place made me realise that you can have that sense of history. It doesn’t need to be large, it just needs to have character.

“I love the layout of this flat. I love its flow. I’m particularly fond of the sitting room, which reminds me of a Georgian parlour. I’ve filled it with special things – lots of treasured folk art, embroidered things, pieces by my mum, many of which are quite nautical, as I love the sea. I tiled the fireplace too, to bring a bit of extra brightness, and got rid of some very impractical cupboards either side. The picture above it was the first thing I bought for the flat. It’s a wool-work from around 1750, made by a fisherman. Lots of the things in here are really personal.

“Since I started my own business, the idea of home has become even more important to me. It’s become a focus of my self-expression, I think, which is why so much of the stuff on display is made by me. In another sense, I’ve designed the house with my new working practices in mind: the kitchen table, for instance, is the perfect cutting-table height, so I can use it when I’m snipping fabric. In lots of ways, this house is a reflection of me and my life. I love that homes have the power to do that. But it also means I’m going to miss this place a lot. It’s perfectly practical that I’m moving, but I’m leaving a lot behind. This has been an amazing home.”