A Maker’s Story: Alexander Griffin on making contact with the past through plaster

The master caster’s first collection of original mirrors and lamps, all inspired by historical design, have been years in the making. And, he says, they’re all the better for it. Here he elaborates on how they provide touchpoints with periods past – and why it matters 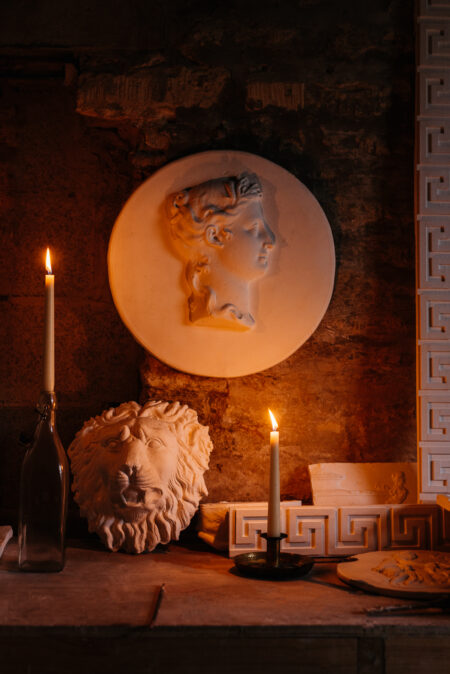 Finishing a collection, as any maker will tell you, is no mean feat. But finishing your first, after years of thinking, planning and testing, all while continuing to earn a living, is an achievement of an altogether different sort. “I’m thrilled you like them,” says plaster caster Alexander Griffin, with genuine sincerity. We’re looking at his new range of mirrors and a soon-to-be completed set of lamps, which he’s been thinking about since he first bought a bag of powdered gypsum in 2017. There’s a frisson in his voice when he talks about them.

We’re in Cambridgeshire, over the county border from Stamford, in a former agricultural building round the corner from Alexander’s parents’ house, which they’ve been doing up together as a family for nearly 20 years, restoring everything painstakingly and by hand. This studio, while still in development, is a majestic space, dramatic in its rawness, yet tempered by the stacks of smooth white plaster casts stacked on every surface, with their gentle luminosity.

Up until this point, these are what Alexander has been making and selling, independently from the outset and now also through Inigo favourites Berdoulat in Bath. There are architectural details – columns, capitals – and bits of sculpture; there are portrait roundels and relief panels. All are refined and somewhat restrained, classic and classy. “But part of my motivation to learn casting was that I wanted to create my own designs – to reproduce in plaster something original I had made, rather than exclusively extant objects,” he explains.

The mirrors are cast from wooden originals he has meticulously built by hand. There’s a gorgeous Greek-key one (a nod to another connoisseur of casts, John Soane) and one with a more Chippendale-y chinoiserie motif. Each wooden prototype has taken hours of Alexander’s time: sawing, gluing, filing, sanding, filling every tiny joint. Meanwhile he’s also been developing the lamps, their elegant forms drawn from architectural balusters he’s come across on his travels. The counterpoint between the bases’ sweeping curves and sharp edges is nothing short of lyrical.

In some ways, it was always going to take five years to get here. Not only did Alexander have to sell some work to fund his experiments, “I had to learn my craft,” he says. Looking at these pieces – glowing in this dimly lit space; exquisite and, yes, original – it seems the years of training have paid off.

“I’ve always tried to make things. I come from a family where that’s the norm; they’ve restored each home we’ve lived in and I’ve had the opportunity to be involved, to work with my hands and develop some practical skills. In the most basic sense, I’ve learned how various materials work and it’s given me confidence – maybe slightly misplaced, but confidence nevertheless – that I could pick up a piece of timber, for instance, and do something with it. I’ve been watching and involved in building and restoration from a young age, so working practical things out has, to a degree, been inculcated in me – as has the patience of making.

“That’s what happened with plaster. I don’t want to over-egg the idea I’ve had no training, because I’ve done this in the age of the internet, but I have nevertheless had to develop my skills slowly and independently. At the beginning, every time I bought materials I would usually try and have a quick chat with the merchant’s technical department. You can’t afford to waste hundreds of pounds making a mistake that you could have easily asked about.

“Learning how to cast has involved a healthy amount of trial and error, which is why, when I was starting out, I began with smaller things. Since then, I’ve just tried to progress. Recently I worked at Belcombe Court, a Georgian house designed by John Wood the Elder near Bradford-on-Avon, taking casts of intricate in-situ features, including shutter panels and a fireplace. It was challenging, given the negative space behind the 3D carved elements – the undercut. I’m excited to have progressed to this sort of work.

“I love how plaster casts give you a very tangible yet accessible connection to the past. You can imbue a room with great historical atmosphere with plaster casts; you can reference a period or style without having to own or rent a house from that time. The first thing I cast was an ammonite – one of the most ancient things on earth.

“Originally, plaster casts were teaching resources. Soane used them to instruct his students on antiquity. I consider that to still be a benefit of having them; you can engage with them and they give you a sense of what a certain style or period was like. Plus, I always thought Soane’s life at home sounded very appealing: chilling in his house, rearranging his casts and drinking quite a lot of champagne. What’s not to like!

“I also find casts deeply romantic for the same reason. They’re so evocative. On one hand, their beauty is immediate – they’re lovely to look at – while on the other they can transport you in a second. They also bring texture to any room, which is almost more important than colour, for the way it moves light around a space. I think that’s my principal attraction to the material – its potential for chiaroscuro in different lights. Depending on what kind of building you put a plaster cast in, where the windows are, what lighting you have, the contours and shadows – and consequently your perception – will change throughout the day.

“I’ve been very lucky to have befriended and collaborated with Berdoulat. A good deal of my work sells through them, as well as to private clients. But alongside this I’ve been developing my original pieces – the mirrors and the lamps. Everything is made by hand, which has been quite painstaking, but that’s the price you pay.

“The lamps are cast from a timber former, but I carve the finished pieces by hand. It’s so delicate; I wanted the thin edge to be sharp, so making sure it’s fine without snapping it in the process has been my principal focus. It’s loosely based on a few balusters I’ve come across, which I’ve abstracted. I did the same with the Chippendale chinoiserie on the mirror. ‘Abstracted Thomas Chippendale’ is not a line you hear often, is it? But that’s what I like to do – to rework these historical motifs to make them clean, simple and, hopefully, in harmony with a greater variety of people’s homes today.

“It’s taken me time to get here, but that doesn’t bother me (though the winter of 2018, when I was trying to cut hundreds of straight lines without a mitre as the snow came down outside, did feel particularly long…). Taking time allows you to visualise how you’d like things to be when they’re finished, which makes you less stressed about them taking longer than you might have thought. I’ve been telling friends about these mirrors for years – they must be bored of hearing about but never seeing them! But if I’d finished them in 2019, they wouldn’t have been right. It all comes back to the idea of making, and the patience you have to have. Work that you’re happy with takes time.”